The first-ever visit of the King of Saudi Arabia to Russia was apparently a success. Russia and Saudi Arabia concluded a number of contracts in a variety of areas - from the defence industry to culture. What are the prospects for their implementation? 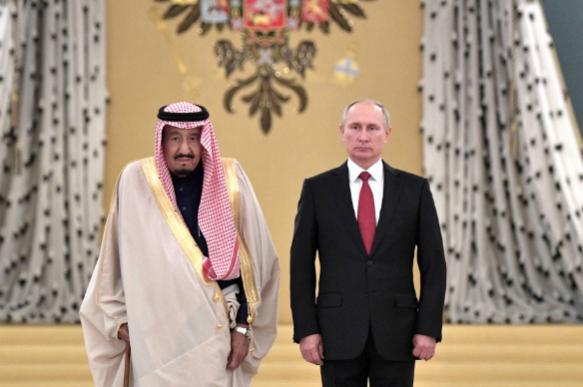 The first attempt to establish cooperation between Russia and Saudi Arabia was made ten years ago, when Russian President Vladimir Putin visited Riyadh. In the kingdom, Putin was welcomed by the predecessor of the reigning monarch, King Abdullah, who decorated the Russian leader with the highest award of Saudi Arabia - the Order of King Abdelaziz.

During Putin's visit to Saudi Arabia, the parties signed a number of agreements as well, and they were similar to the ones that the parties have signed during King Salman's visit to Russia. However, none of those documents have ever been implemented. Is Saudi Arabia going to implement the recently signed documents?

Undoubtedly, Moscow would like to have it all. However, fortunately or not, this desire has nothing to do with reality.

Most likely, Russia's realistic objectives are much more down-to-earth: to create an "outpost" in the Persian Gulf - in military, political and economic spheres.

Russia has been interested in the region for a very long time. In the XIX century, the Russian imperial government was looking for an opportunity to gain a foothold there. Russia managed to take strong positions in Iran, but failed to conquer the Arabian coast of the Gulf.

After the revolution, the Bolsheviks made another attempt. Soviet Russia was the first state to have recognised the newly emerged Kingdom of Saudi Arabia. The two countries established diplomatic relations. One of the sons of the founder of KSA, Prince Faisal, paid a visit to Moscow. In a few decades, he became the king, but the ties between Russia and Saudi Arabia were soon terminated.

After the collapse of the Soviet Union, the Russian president visited Saudi Arabia, but it was just a plain visit that brought no results. Ten years later, another "landmark" event in the history of Saudi-Russian ties happened - the King of Saudi Arabia paid a visit to the Russian Federation. Will it be any good, though? Will Russia be able to establish normal regular relations with the Saudi kingdom and its neighbours? Will Russia be able to develop, expand these relations steadily and consolidate its political and economic positions in the region? What should be done not to waste the current attempt?

In Syria, Russia has demonstrated a very important thing: Russia is a serious player and does not waste words. Russia's unquestionable ability to establish contacts and conduct a dialogue with as many conflicting parties as possible is equally important. Finally, Russia showed advantages of its military hardware in Syria as well.

As we can see today, the above was a necessary prerequisite for the beginning of an extensive dialogue between Moscow and the Gulf countries, including the Kingdom of Saudi Arabia itself. Syria conditioned their interest in Russia, and the Gulf States opened the door for Russia to the Arabian coast of the Persian Gulf.

Yet, it would be short-sighted to believe that the matter is already in the bag. The Gulf has started talking and listening to Russia. We need to reaffirm and consolidate our positions before  proceeding to the next stage - to create a solid basis for Russia's presence in the region and cooperate with local and external players, including the United States, China, Britain, India, and the EU. As one can see, the competition in the region is more than just tough.

Russia's prime goal is to think through the strategy of competition with the powers and companies that have a huge experience of being present in local markets. Russia needs to realise that no one is waiting for Russia, Russian companies, goods and services to come to the region. Even if Russia comes, she will have to deal with a targeted and coordinated system of counteraction.

Russia has just made a few humble steps in the Middle East, and the real game is just getting started. It is the results of the second part of the game, if these results can ever happen, that may show whether Russia's regional strategy in the Middle East can be successful.