Have you ever heard about a UN reform project proposed by UN Secretary General Antonio Guterres? Hardly. Yet, the declaration from US President Donald Trump on the same subject has received extensive media attention. It does not have any practical meaning, nor has it appeared to defeat bureaucracy in the organisation. It will be interesting to see who is not going to sign it. For the time being, it goes about Russia, China and France. 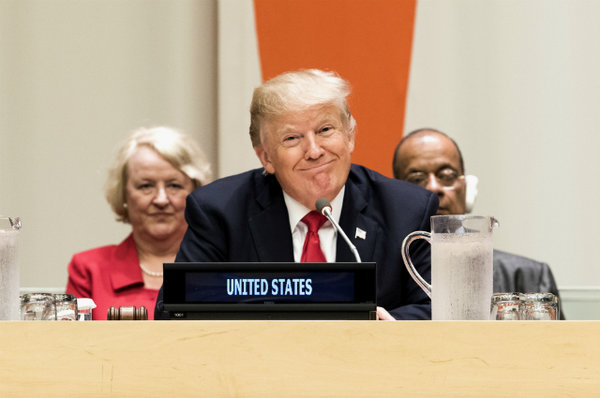 During his speech at the UN General Assembly on September 18, US President Donald Trump put forward a proposal to sign a declaration about the reform of the United Nations. The document, in particular, says that the US supports the efforts of the UN Secretary General to make specific changes to the United Nations in order to better coordinate its work in providing humanitarian assistance and promoting peace initiatives.

Washington suggests reducing the personnel and financing of the United National Organisation.  Even though the regular budget of the United Nations has increased by 140 percent, and the number of employees has doubled since 2000, Washington does not see any results of the investment made, Donald Trump said in his speech.

The statements from the US president came as normal work proposals, but why did Trump speak before Guterres? The UN Secretary-General sent out his project to 193 members of the United Nations on September 12, Portuguese newspaper Publico wrote. That is, the discussion of the document has not even started because people were only reading through it. Making decisions at the UN is a long process, so why show contempt for partners and the UN Secretary General?

The American leader suggests all UN members should pay equally - both for the budget and for  military articles of expenditure (to maintain peacekeepers). In this case, one would need to change the charter, in which contributions are established proportionally to each members' GDP, taking into account their sovereign debt. The data are updated every three years at the UN General Assembly. For changes of this scale, Trump has chosen a wrong format.

"A declaration will not trigger a reform at the UN," Russia's Ambassador to the UN Vasily Nebenzia said. According to him, improving the effectiveness of the UN can only be possible through intergovernmental negotiations. "The document that the US proposes is a declaration from the countries that stick to similar views on the matter issue, but this is not an instruction to the secretary general about how to reform the organisation," the Russian ambassador said.

One can see here that Donald Trump obviously lacks diplomatic skills. Plus, there is a lot of bureaucracy implicated in his proposal, even though he spoke strongly against it. "The draft declaration is just the usual rhetoric. It could have been issued five years ago, or 50 years ago," John Bolton, the former US ambassador to the United Nations told Fox News. "It reads like it was drafted by the UN Secretariat. I certainly hope it wasn't drafted by the US government," he added.

Why Washington needs the declaration

It is not the essence of Donald Trump's declaration that is important, but the collection of signatures for it as loyalty check. The number of signatory vassals is growing and has already reached 136. There are sovereign countries as well (56 delegations, including three members of the UN Security Council - Russia, China and France).

The report from UN Secretary General Antonio Guterres about the reconstruction of peace and security is intended to launch a worldwide process of consultations to struggle against the "fragmentation" of the UN system and its "separate blocs," "to bring the peacekeeping machine (the military) closer to planning and political work (diplomats) and improve coherence on strategic and operational level of work," Publico wrote.

Consensus on complex issues in the United Nations shall first be achieved in committees that submit proposals to the Conference, where delegations from all states gather to discuss final terms, before bringing topics of the agenda of the UN General Assembly.

"The UN needs to be reformed. First of all, one needs to cut bureaucracy, but this should be done by the people who are familiar with the situation," Sergei Ordzhonikidze, former deputy general secretary of the organisation, chairman of the Russian public council for international cooperation and public diplomacy, told Pravda.Ru. He believes that Trump's declaration about the reform of the United Nations is a publicity stunt and an attempt "to distract attention from internal problems and pressure from within."