The countries of Eastern Europe refused to comply with the decision of the EU Court on the admission of migrants. This is a mutiny on board the European Union. Will Brussels suppress it? 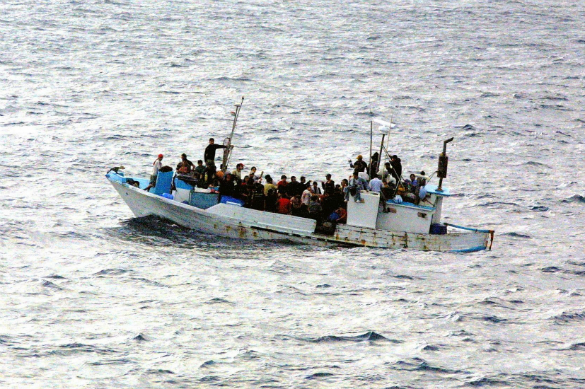 The European Court rejected the claims from Hungary and Slovakia, which demanded quotas for the admission of migrants be abolished, even though they are mandatory for all EU countries. The highest court of the European Union confirmed the decision of the European Commission: each member of the European Union is obliged to accept a certain number of refugees who temporarily stay on the territory of Greece and Italy. The position of governments or parliaments does not matter - the rule is mandatory to all.

One should pay attention to two aspects of the story.

First, it is the court ruling that deserves attention. The court ruled that the decision of the European Commission on quotas was not a legislative act and therefore it did not need to be approved by parliaments of EU countries. At the same time, the decision is obligatory for execution, because it was made for effective and quick reaction to emergency situations. As long as the actions of the European Commission are temporary, they may not correspond to European legislation.

Does it bring up any associations with "Soviet dictatorship" in Eastern Europe? The USSR could not even think about such extreme temporary decisions on an international level. Such decisions would have required preliminary consultations with governments and parliaments of union states.  It appears that the European Union has excelled in its creative approach to democracy by temporarily turning it into a dictatorship under conditions of an "emergency."

Secondly, Eastern European countries are strongly determined to ignore the decisions of the EU Court. Budapest and Bratislava stated that they do not change their position and will seek opportunities to appeal the verdict to avoid its implementation.

Appealing the verdict of the EU Court is a hard nut to crack as it goes about the highest judicial instance of the European Union. It is easier not to do it. Poland, for example, has not joined the lawsuit from Hungary and Slovakia, but wholeheartedly supported them. Afterwards, the head of the Polish Foreign Ministry, Witold Jan Waszczykowski, stated the following: "We will not implement this decision ... Polish security is more important than such rash decisions of European institutions."

The Poles, apparently, did not go to court because they understood the meaninglessness of this step and initially did not intend to reckon with the opinion of the judges. In May, Polish Interior Minister Mariusz Błaszczak insinuated that refugees were more terrible than EU sanctions.

Thus, Warsaw demonstrates its readiness to support and, if necessary, lead the movement of "dissidents" in the ranks of the EU - just like it assumed "responsibility" to lead dissidents inside the Eastern bloc. The role is familiar to the Poles. They will be happy to go against the opinion and interests of their sworn ally - Germany.

Of course, Berlin was pleased with the decision of the EU Court. "We expect that all European partners will abide by this decision and implement all decisions without hesitation," German Foreign Minister Sigmar Gabriel said.

Bulgaria would rather die than accept migrants

They may expect, of course. It is much more difficult to persuade Eastern European nations to open their borders and accept migrants. They will not do it. It's not just the Poles, Hungarians, Slovaks or the Czechs. The Austrians do not want to do it either. They do not complain to the court, but make every effort to drive the strangers out. For example, they intend to sharply cut allowances to migrants.

The example of Bulgaria is also very indicative. Since 1989, when the communist regime fell, the population of Bulgaria has declined from nine million to almost seven million people. By 2020, it is expected to drop further to 5 million, reports the BBC. This is depopulation, which eloquently characterises the policy of European integration. Nevertheless, the Bulgarian authorities do not want to let migrants in even in the face of the danger of depopulation. To protect themselves against the invasion of refugees from the Middle East, the Bulgarians have built a wall on the Turkish border. It is difficult to say how effective the wall can be against the backdrop of the declining population of Bulgaria. Nature does not tolerate emptiness.