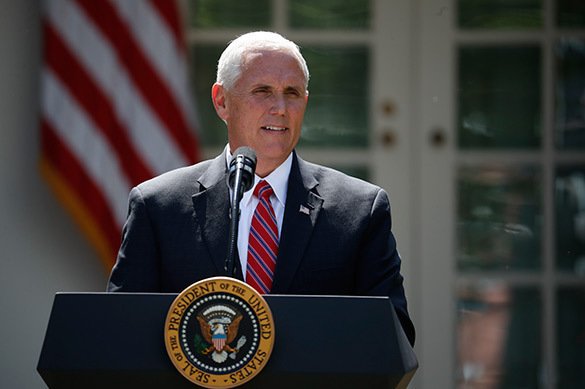 "Our Western Hemisphere is a key priority for our administration.  Our values are the same, our interests are intertwined, and our futures are forever linked," Pence said in Argentina. "A prosperous Latin America means a more prosperous United States of America," he added.

Leftist anti-Americanism has been receding lately against the backdrop of the chronic disease - omnipresent corruption. One could see this happening in Argentina, Brazil, some other Central American countries.

Events took the most dramatic turn in Venezuela - the main front of the struggle between nationally oriented left-wing forces seeking to wrest control of national wealth from the hands of American capital and comprador forces bribed by American monopolies.

The victory of President Maduro and his Constitutional Assembly will mean the success of the left and the defeat of the United States. The victory of the parliament will revive absolute power of Washington.

This is how the US administration views the situation. It is no coincidence that President Trump prefaced Pence's visit to Latin America with arguments about the possibility of military intervention in the name of "freedom and democracy" in Venezuela. This showed that Washington is still ready for anything to preserve its positions in the region.

The response to Donald Trump's threats was predictable: Venezuela's neighbours, even the ones that  oppose actions of President Maduro, declared the military scenario unacceptable.

This, in principle, could be regarded as the defeat of the White House. Yet, Pence, who tries to look as peace-loving as possible, obtains an opportunity to demand support from Latin Americans for sanctions against Maduro and the imposition of the blockade of Venezuela in exchange for the USA's refusal to fight the Caracas regime.

Apparently, this is the goal of Mike Pence's tour. In addition to the Venezuelan problems, he actively discusses issues of trade and economic cooperation between America and Colombia, Argentina, Chile, and Panama. Interestingly, when Mike Pence arrived in Latin America, Foreign Minister of Bolivia Fernando Huanacuni arrived in Moscow.

Bolivia is one of the most anti-American countries in the region. Along with Venezuela, Bolivia maintains close relations with Russia. Fernando Huanacuni invited President Putin to visit Bolivia in the autumn, when the country hosts the Forum of Gas Exporting Countries (GECF).

As we can see, Latin America no longer appears to be the back yard of the United States, where Washington can do whatever it wants. Not all countries of the region are united in their rejection of Maduro's policy, and not all of them look up to America. In addition to Venezuela and Bolivia, Nicaragua, Cuba and Ecuador do not intend to back down to the United States either.

In these circumstances, Mike Pence's tour looks more like an inspection trip on the eve of another escalation of confrontation. Washington clearly intends to deepen the split between the states of the region.