A Russian newspaper obtained copies of secret documents of the Security Bureau of Ukraine (SBU) about special operations to destroy evidence of mass murder in the sky over the Donbass on July 17, 2014. The Sovershenno Secretno newspaper (translates as "Top Secret") conducts an investigation into the downing of the Malaysian passenger Boeing over Ukraine. 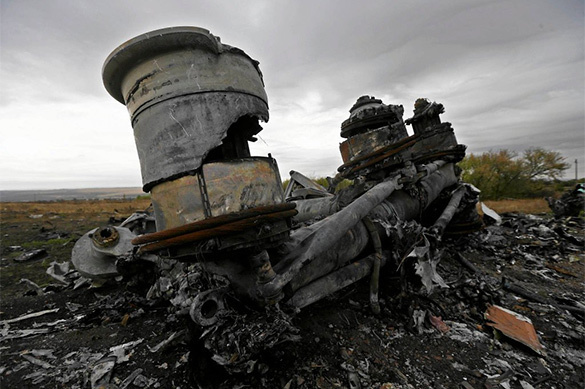 The copies of the documents that the newspaper obtained - orders, coded telegrams and plans - were written on official letterheads of the Ukrainian Security Service. According to the newspaper, Ukrainian President Poroshenko and his generals should be put on trial in The Hague as war criminals.

The person who handed the documents to the newspaper, said that it was part of his very long and exhausting work. "In Ukraine, I have a few friends, who are fed up with the fact that other people wipe their feet on them. They are two-faced guys: they want those bastards to be held accountable for what they did, but at the same time, they want a security cushion and offer to buy those documents," the anonymous source of information said.

"Believe me, I just want those bastards from the SBU to get what they deserve," he added.

The newspaper published copies of four criminal orders of the Security Bureau of Ukraine. The information that the documents contain suggests the following:

- the new Kiev authorities  - President Poroshenko and his generals - are entirely responsible for the shoot-down of the Malaysian aircraft;
- Ukraine's military aviation was involved in the plane crash;
- to cover the traces of the monstrous crime, the SBU had been conducting special operations since the end of July 2014 to destroy the facts of the special operation that pointed to the presence of combat aircraft on combat missions on July 17, 2014.

Pravda.Ru asked an expert opinion on the subject from editor-in-chief of the Top Secret newspaper, Sergei Sokolov.

"Can you assert that the information that your newspaper has obtained is genuine and trustworthy?"

"We have had a number of meetings with the source of this information. We additionally checked the papers with the help of veterans of special services, who know all about the departmental bureaucracy. It looks very much like in Russia, because the SBU is an offspring of the USSR's KGB. The documents that we have are arranged in a way as they should be arranged at the security department. Plus, the source told us that he received the documents from the depths of the SBU.

"The people who handed the documents to that person dislike the Ukrainian government, and we have to buy those documents. All circumstances of the story convince us that the documents are authentic. Of course, Russia's Investigative Committee will have to look into all this."

"I do not believe that they can do anything, because, as we could see, international organizations believe in the story about the Russian Buk missile complex that downed the Boeing. They do not want to listen to what Russia has to say on the subject, they are blind."

"Do you plan to contact Malaysian and Dutch sides? These countries are highly interested in the investigation."

"Of course, but it is only the families of the victims who are interested in learning the truth about what happened. Everyone else wants to blame Russia for everything. We are sending the documents to Russia's Investigative Committee in the first place."