"Two centuries ago, a former European colony decided to catch up with Europe. It succeeded so well that the United States of America became a monster, in which the taints, the sickness and the inhumanity of Europe have grown to appalling dimensions." Frantz Fanon, 1961. (1925-1961.) 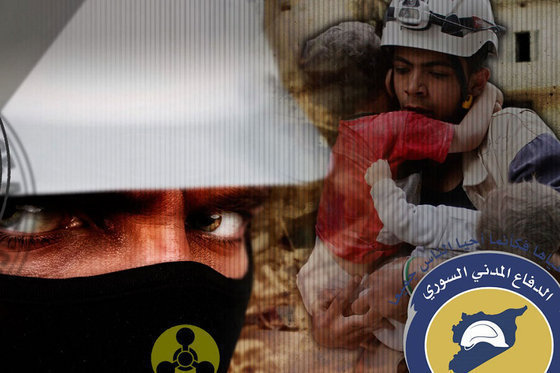 Although the US' entirely illegal attack on Syria's Shayrat Airbase in response to an alleged chemical weapons attack by the Syrian government, showed not a thought towards Congressional debate, United Nations mandate or the rule of law, it seems that some thought might have gone in to the date.

Not alone was embarking on the action on 6th April - US time - the 100th anniversary of the United States entering World War 1, but in Europe and the Middle East, as the fifty nine Tomahawk Cruise missiles struck on the dawn of 7th April, it was the 61stanniversary of Syria's independence from France being officially recognized - and of the 2003 fall of Baghdad to the illegal invaders, the US, UK and Poland committing Nuremberg's "supreme international crime ..."

Incidentally, April 7th was also the day Attila the Hun "the scourge of all lands", sacked the town of Metz and widely slaughtered other cities in Gaul in 451.

A reminder: On 12th September 2013 Syria's President al-Assad committed to surrender Syria's chemical weapons, with the caveats that the United States must stop threatening his country and supplying weapons to the terrorists.

On 23rd June 2014 at 11.32 pm., then Secretary of State John Kerry Tweeted: "Today the last 8% of declared chemical weapons were removed from Syria. Great work done by all involved."

Further, "We struck a deal where we got 100 percent of the chemical weapons out", Kerry said on NBC's "Meet the Press" in July 2014. Kerry was referring to the deal between the U.S., and Russia in September 2013 in which the Russians agreed to help remove and destroy Syria's entire chemical weapons stockpile.

Moreover: "The last of the remaining chemicals identified for removal from Syria were loaded this afternoon aboard the Danish ship Ark Futura", confirmed Ahmet Üzümcü, Director General of the Organization for the Prohibition of Chemical Weapons (OPCW) in June 2014.

However, that said, the chaos that ensued in trying to find countries who would dispose of the weapons hardly augured well for the safety of their disposal or indeed the certainty that quantities were not simply be sold on to terrorist groups. For example sixty containers were: " ... transferred from a Danish cargo ship to a US ship in the Italian port of Giola Tauro, in Calabria, with further consignments also expected to arrive."

Amongst numerous crises, the port suffered from allegations of being a: "major hub for cocaine shipments to Europe by the Calabria-based 'Ndrangheta mafia." Not really the safest place to ship chemical components prized by some very well funded criminals. (See the full story of the mind-bending chaos surrounding the removal by the OPCW at 1.)

As ever, double standards rule. The same article reminds that when it comes to chemical weapons: "Israel rules the Middle East supreme, its WMD capability intact. This was pointed out by Bob Rigg - former UN weapons inspector in Iraq, former senior editor for the OCPW and former Chair of the New Zealand National Consultative Committee on Disarmament:

The "international community" now led by the Presidential "Agent Orange" in the White House is toweringly selective when it comes to accusations of weapons of mass destruction. For example, in 2009, Human Rights Watch, in a shocking, detailed seventy one page document (2) reported that:

No Cruise missiles were fired at Israel, no worldwide condemnation at an apocalyptic assault on a tiny, illegally fragmented part of Palestine with no army, navy or air force. How selective the US and friends are in their murderous, righteous indignation.

Trump is shortly to embark on a State visit to Israel

Syria, of course is one of seven countries (Iraq, Syria, Somalia, Libya, Sudan, Iran and Yemen) that General Wesley Clark was told by a Pentagon pal shortly after 9/11, "was going to be taken out."

Trump has followed his warmongering predecessors declaring himself Judge, jury and executioner within 48 hours of the chemical release, with apparently no thought as to who might have been storing lethal substances in an area entirely controlled by the "moderate" Western backed organ eaters, head choppers and child executioners.

International law, the UN Charter, diplomacy has been damned, ditched and shredded by yet another self appointed "leader of the free world." The attack on Syria another US illegal assault on a sovereign nation.

On the following Monday night (10th April) sabre rattling US Defence Secretary James Mattis, warned the Syrian government it would be: "ill-advised ever again to use chemical weapons ...", still without a shred of reliable evidence that Syria was involved.

In addition to the fifty nine Tomahawks, the US has been using DU weapons in Iraq since 1991 and eventually admitted to using them in Syria in 2015, though in spite of it being the US weapon of choice no figures for use in Syria in other years have been forthcoming.

Here again, lest forgotten, quotes from the US Army itself regarding the terrifying legacy of DU: "No available technology can significantly change the inherent chemical and radiological toxicity of DU. These are intrinsic properties of uranium." (US Army Environmental Policy Institute, Health and Environmental Consequences of Depleted Uranium Use in the US Army, June 1995, p.xxii.)

Further: "DU is a ... radioactive waste and therefore, must be deposited in a licensed repository." Same source, p 154. Note: " ... a licensed depository." Not on a school, home, street, farm, Mosque, church, university, hospital, village, town or city. "Short term effects of high doses can result in death, while long term effects of low doses have been implicated in cancer."(Kinetic Energy Penetrator Long Term Study, Danesi, 1991.) Emphasis mine.

So let's have no more self righteous nonsense over something entirely unproven the Syrian government are being accused of when the US itself has been using chemical and radiological weapons for twenty five years, it's own Army manuals warning of the dangers. The soaring cancers and birth defects linked to the use of DU in Iraq and where ever else they have been used - mirrored in US servicemen, women and families are chilling proof of the voracity of the warnings. DU has a half-life of 4.5 Billion years. Its use condemns and curses the not yet even conceived - until the end of time.

In 2008 the European Parliament called for a global ban on DU weapons and a moratorium on their use. In a Resolution which: "strongly reiterates its call on all EU Member States and NATO countries to impose a moratorium on the use of depleted uranium weapons and to redouble efforts towards a global ban." The resolution was adopted with 491votes in favour, 18 against and 12 abstentions. (European Parliament external link May 22, 2008)

In March 2007 the Belgium Parliament had voted unanimously to ban DU weapons in a law prohibiting: "the manufacture, use, storage, sale, acquisition, supply and transit of inert munitions and armour that contain depleted uranium or any other industrially manufactured uranium." (Belgian Coalition 'Stop Uranium Weapons', 22nd March 2007.)

In June 2009, Belgium became the first country to prevent the flow of money to producers of uranium weapons anywhere, the law requiring that: " ... financial institutions ... must bring their investment in large weapon producers such as Alliant Techsystems (US), BAE Systems (UK) and General Dynamics (US) to an end."

Donald Trump, thus had a chance to turn a new leaf as new President, make good his promises on avoiding foreign interventions with concrete initiatives already in place to endorse and build on.

On January 26, 2017, British Prime Minister May during her visit to President Trump in Washington made the following statement: "The days of Britain and America intervening in sovereign countries in an attempt to remake the world in our own image are over." Yet the UK government immediately supported the shameful radioactive and chemically toxic bombardment of Syria.

Further, it was widely reported that thirty six of the Cruise missiles are unaccounted for, where did they land, who did they kill, or are they lying at the bottom of the Mediterranean decaying, to poison it's waters and life for all time?

"Even beautiful babies were cruelly murdered in this very barbaric attack. No child of God should ever suffer such horror", said Trump of the alleged attack in Syria, with no proof of who was responsible, but abundant proof that the us backed terrorists had access to dangerous chemicals.

However, as Chris Ernesto writes with heart searing instances: "In the first three months of his Presidency, Trump has dropped bombs - and killed children (and beautiful babies) - in Yemen, Afghanistan, Syria and Iraq."

However, in a nauseating irony, exposed by the Palmer Report, Trump allegedly may have profited from the deaths he caused.:

"Tomahawk missiles are manufactured by Raytheon Inc., and according to this report from Business Insider (link), Donald Trump owned stock in Raytheon up through at least the start of the presidential election cycle. There is no record that he subsequently sold that stock.

"The Tomahawks that Trump just burned up will have to be replaced, meaning he just handed a nearly hundred million dollar payday to a company he owns stock in. Not surprisingly, shares of Raytheon spiked today (link), meaning he's directly profiting from his Syria attack."

The shares were, within hours, recorded as up by 2.1%.

In a further twist in integrity ditching, The Washington Post had writer Ed Rogers: "... to push for and praise military action against Syria without disclosing that he's a lobbyist for defense contractor Raytheon ..."

'In the piece headlined "Could it be? Is President Trump on a roll?"  Rogers wrote that Trump "received bipartisan support for his military strike in Syria ..." '

"The Post did not disclose that Rogers and his firm, BGR Group, lobbies on behalf of Raytheon ... Rogers is listed as a (BGR) lobbyist. BGR is one of the country's largest lobbying firms, taking in nearly $17 million in reported lobbying income last year."

So much for "draining the swamp."