Can Donald Trump strike a nuclear blow on North Korea (the DPRK)? The analysis of the situation shows that the US can not ignore the positions of Moscow and Beijing that stand strongly against the US attack on the territory of the DPRK. At the same time, Moscow has distanced itself from the North Korean regime by saying that Russia does not accept Pyongyang's nuclear adventures. Nevertheless, Moscow has also warned Washington about the inadmissibility of taking a military action. Pravda.Ru observers Said Gafurov and Aydin Mehtiyev discussed the current crisis on the Korean Peninsula. 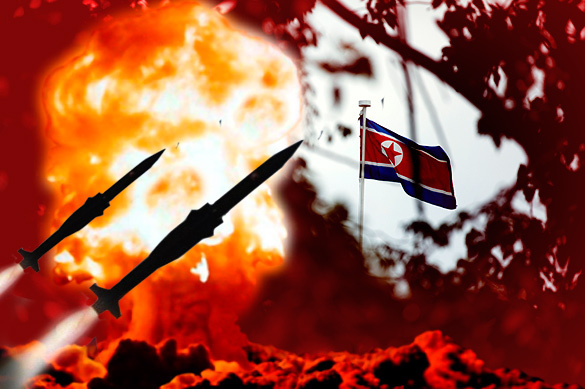 "Although the severity of the problem - the possibility of an immediate strike that the United States may inflict has slightly subsided, the state of anxiety remains. Russian Foreign Minister Sergei Lavrov said that Moscow would not like Washington to take an actions against North Korea similarly to the one that the US took against Syria. US top officials send contradictory signals. Some of them say that they exclude a military scenario, whereas Michael Pence says later that USA's strategic tolerance with regard to North Korea has ended.

"I am absolutely convinced that the Americans are sounding out Beijing's, rather than Pyongyang's reaction. In fact, North Korea does not owe the USA anything, because Pyongyang has not pulled out from the treaty on the non-proliferation of nuclear weapons. In the conditions of the bipolar world, when the Warsaw Pact was concluded against NATO, the security of the Democratic People's Republic of Korea was guaranteed. Now we can see the Americans trying to impose their unipolarity.

"After all, North Korea supports the idea of the non-nuclear world. They clearly say: if the United States abjures nuclear weapons, we will abjure them too and we will let your experts in to see that. However, the Americans say: no, we have a right for an atomic bomb, we are white people, and you are second-class people, so you do not have a right for an atomic bomb.

"President Putin said that if a country has no nuclear bomb, like Libya, for example, then NATO would come to bring its "democracy." However, if you have a nuclear bomb, no one will dare to come to your territory. He clearly had North Korea, Pakistan, India in mind - the countries that have built their nuclear weapons. In this situation, the North Korean position is clear.

"However, North Korea conducts provocative tests even though there is no need to hold those tests so frequently. They do it for political purposes and put China in an extremely uncomfortable position. On the other hand, South Korea is much more aggressive than the DPRK - the southern army is a lot greater in every sense.

"If a nuclear conflict breaks out on such a small piece of land, many countries of the region, including Russia, China, Japan and others would have to evacuate millions of people.

"Pyongyang's main patrons are Beijing and Moscow. Xi Jinping assured Western leaders that he would be able to come to an agreement with North Korea. The latter admits being a friend of China, but does not accept the idea of being a puppet.

"The Americans have recently stated that they are not going to deploy nuclear weapons in South Korea. Is this due to the fact that Moscow and Beijing are strongly opposed to it? Washington also suggests waiting for the new president to come to power in South Korea.

"Usually, in case of conflicts, intermediaries join forces and come to talks to solve a crisis peacefully. We have not seen any of such attempts in relation to North Korea. No one even tries to attract North Korea to negotiations. Trump is not an inexperienced fool. He is a strong-willed person who has made himself a multi-billionaire. He knows all the weak and strong places of state officials perfectly well. He has oil tycoons like Tillerson in his team - gods of big business, who know all about the work of public structures. Trump is not stupid - he knows what is going to happen in case a nuclear war breaks out."