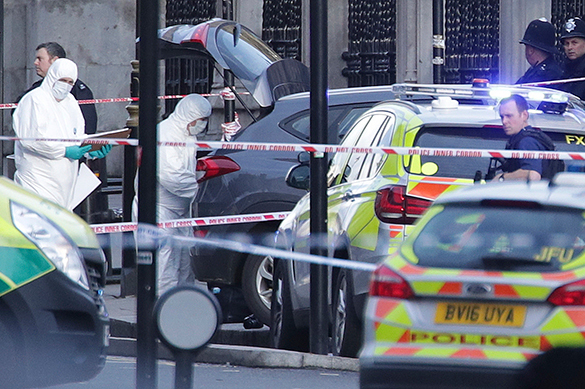 It took the British intelligence almost 48 hours to name the terrorist who rammed a SUV into bystanders near the Westminster Bridge and then attacked and killed an agent guarding the Parliament. In total five people died and more than forty people were wounded.

Initially several mainstream medias claimed that the terrorist had been identified as the Islamist hate-preacher Trevor Brooks "Abu Izzedeen", a British national of Jamaican origin who had converted to Islam in 1993.

The photo of the presumed terrorist, a black male with a salafi-style beard being carried away on a stretcher, left very little doubt about the identity of the attacker as he did look like Brooks; no wonder his biography began to appear on several online newspaper and analysis websites. Was the photographed man just one of the victims?

Brooks was well-known to British intelligence as he had been deeply involved in the jihadist entourage linked to the Finsbury Park mosque, sticking around with preachers such as Omar Bakri Muhammad, Abu Hamza al-Masri and later with Anjem Choudary (arrested last year by British authorities for supporting Isis).

Former spokesman for the Islamist group al-Ghurabaa (outlawed in 2006), in 2001 Trevor Brooks had travelled to Pakistan, officially for "lecturing" and then to Afghanistan, to attend a training camp (according to his own claim).

In 2006 Brooks had defined the London 7/05 terrorists as "praiseworthy" and between 2007 and 2008 he had been arrested on several occasions for terrorism support.

Even though a British court had forbidden him to leave the country without previous communication and even though a profile like his should have been closely monitored by the British intelligence, on November 2015 he was stopped ny Hungarian police on board a train bound for Romania. Brooks was accompanied by another British Islamist convert, Simon "Sulayman" Keeler, member of the British branch of Ahl al-Sunna waal Jamaat. The two were both sent back to the United Kingdom. But one question remains unanswered: where were the two men going? Maybe to Syria?

Initially Scotland Yard did not confirm nor deny the identity of the terrorist, but after a few hours Brooks' lawyer claimed that the man could not have been the Westminster attacker as he was still detained in a UK penitentiary.

This news must have been of great relief for the British authorities, otherwise it would have been a major disaster. Let's think about it for a minute: a well-known and old-school Islamist hate preacher who had already escaped once from the British intel's radar perpetrating an attack on the Westminster Parliament?

After almost 48 hours the authorities named the London terrorist as Khalid Masood, a British citizen of Pakistani origin living in Kent, 52 years of age. The man had already been convicted for other crimes not related to terrorism and, accoding to the British PM, he had been detected by the intel's "radar" but he hadn't been put on strict surveillance because he was considered a secondary figure in the Islamist environment.

However there are several elements that leave some doubts, first of all, why did it take almost 48 hours for the British authorities to confirm the identity of the terrorist while they had his body in their own hands and they could prove that Brooks was in jail? (So far such evidence hasn't gone beyond his lawyer's claim that the man is still in jail).

Secondly, the presumed terrorist photographed immediately after the attack, a black male with a salafy-style beard, wounded and taken away on a stretcher, does not appear as an "Asian" nor a "Pakistani" and surely not as a 52-year old man, unless he has access to some secret elisir for eternal youth. The wounded man appears infact much younger and additionally he also seems very similar to Trevor Brooks. No wonder many mainstream news sites had given the news about his identity. Again, was he just a bystander? One of the victims?

Thirdly, we still haven't seen a single photo of this Khalid Masood and nothing about him can be found on the web up to now. No photos of the identified terrorist have yet been released.

Author`s name Giovanni Giacalone
*
15:58
Merkel's remarks about Minsk Agreements were 'petty and disgusting' – Lukashenko
15:02
Viktor Bout says he did not come across Russophobia in US prisons
12:02
Massive fire burns OBI hypermarket at Mega Khimki Shopping Mall to the ground
16:48
US basketball player Brittney Griner exchanged for Russian entrepreneur Viktor Bout
16:31
Zelensky believes Ukraine conflict may end in 2023
20:46
The West is expecting, but not pressing Russia-Ukraine talks
18:27
Putin: The threat of the nuclear war is rising, why deny it
17:17
Ukraine modenises Soviet Tu-141 Strizh drones
15:24
Ukrainian combat drones capable of flying at speed of sound may strike Siberia
14:35
Russian Army continues successful offensive in Krasny Lyman direction
Polish writer shocked to find out Russians will not rise to topple Putin