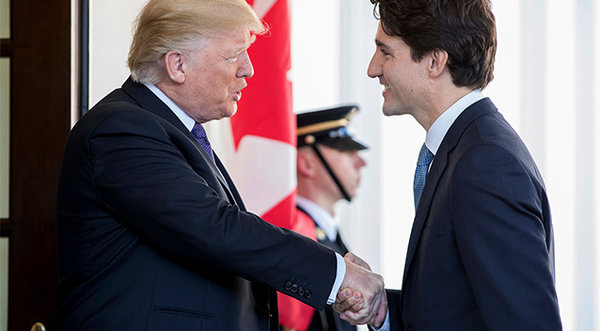 Some of you may already know. The news you heard is correct. 'Larry', one of Canada's three stooges went to Washington. U.S. President Donald Trump extended the invitation a week ago. Canada's rock star but talisman Prime Minister, Trudeau, will sit down for discussions (if that is even possible given Trudeau's dearth of 'knowledge' on any subject) with Trump. The meeting though will not happen in the Oval Office. Trudeau has a known aversion to any venue that involves 'work'.

Trudeau's handlers though have their problems. First, they have to consult their friend, Google; check if Trudeau is not on the State Department's 'no fly' list. Yes, Obama may have lifted the ban on the self-admitted stoner last year; since then, Trump probably had second thoughts. Then there is the pressing problem of Trudeau's past associations. He is a member of a militant Montreal mosque. Even as the country's 'leader', Trudeau never disavowed the group's ongoing commitment to this violent form of Islam.

What that means is that U.S. Air Force may scramble its Washington based F35 fighters. The military cannot allow a foreign aircraft with a hostile celebrity onboard to enter U.S. airspace let alone fly all the way to Washington, DC. With the announcement of Trump's Immigration Ban, America is serious about protecting its borders. The Trump Administration is fussy about who they allow in. To admit the militant Trudeau would fly in the face of Trump's campaign promises. Moreover, Trump bending the rules for Trudeau, would send the wrong signal to the American patriots that voted him in office.

If however, he caves and overlooks Trudeau's buffoon antics this one time, Trump could chastise him over lunch. Tacos at Trump Tower should be sufficient. On another note, Trudeau got excited when he learned that both he and Trump would hold a 'joint' news conference. Pumped is a better descriptor; Trudeau may even have brought along his own personal stash of Yukon Gold. Now if he could only get past I.C.E. Maybe they would not search or have him strip down after Trump gave the 'all clear'.

Trudeau's impending visit presents additional problems for the White House. The Capitol Police will be on full alert. If Trudeau is true to form, odds are that he will light a doogie during the 'joint' presser. He may even pass it along. Now flying high, Trudeau will mumble some blurb about Canada taking in all of the world's refugees. Not satisfied, he will probably finish whizzing on the President's pristine carpet by swearing solidarity with the oppressed Mexicans. He may even go as far to promise to move his Prime Minister's residence to Juarez; he will supervise the tunneling. In the aftermath, Canadians will greet the announcement with a standing ovation.

The Canadian Press will also proffer their spin on the hour's proceedings. The northern neighbor's 'journalists' will make it sound like President Trump was 'delighted' to meet their glorious leader. They soon forget that a little over a year ago, Trudeau when asked by an American reporter, besmirched Trump. He dismissed Trump's chances of even winning the 'Larry' Does Washington Republican nomination; called him nothing more than TV's 'Apprentice'. Then, during the photo-op with Obama, Trudeau put on his laughing, smirking face. The Donald remembers....

Canadians deserve better than what this imposter does. Since the election, Trudeau has accomplished zero over the past year and a half. He has nothing to show for his globetrotting vacations. Working Canadians, especially the shrinking middle class, now have to foot the bill for this grandiose experiment. What should be clear to citizens is that their last election amounted to folly. An even bigger moron in Trudeau replaced one moron, in Moe Harper. In case Canadians missed this fact, America meddled in their General Election. Obama's 'people' propitiously interceded to right Trudeau's fledgling campaign.

The people should question their MSM; ask them why they suppress news about Canada's continued involvement in Ukraine. Like his predecessor, Trudeau too has innocent blood on his hands. Canada's military advisers are still in Ukraine. They call theirs a 'training' mission. Indeed, it is; but the training involves combat operations; Kiev's trained troops attack and kill the largely defenseless ethnic Russians in Ukraine's Donbass region.

Larry Trudeau should not get a pass on his duplicitous posturing in Ukraine. When will an intrepid reporter stand up for justice; call him out? To remain silent is to acquiesce to state sponsored terrorism. What a disgrace!