The Pentagon "may recommend" President Trump to send US ground troops to Syria. It already becomes clear that the new US administration is willing to "test its strength" in the Middle East. 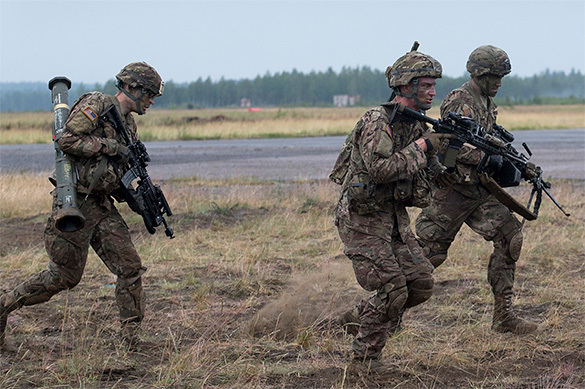 Russian experts do not tend to take the recent statements from the US military establishment as the actual declaration of intent. Thus, president of the Center for Strategic Studies "Russia-The Islamic World" Shamil Sultanov believes that it was just a statement that did not mean anything. "They want to see how others will react. There is no plan behind this yet," he told Pravda.Ru.

Interestingly, the statement from the Pentagon was made soon after first official talks between US President Donald Trump and Israeli Prime Minister Benjamin Netanyahu. At the final press conference, Trump made a number of statements which indicated his willingness to dramatically revise the US approach to most important problems in the Middle East. In particular, Trump has refused from the unambiguous commitment to the formula of "two-states-for-two-peoples" to resolve the Israeli-Palestinian conflict. In addition, Trump suggested Israel should set up an alliance with a number of Arab countries.

To crown it all, the statement from the Pentagon was released shortly before the meeting between top Russia and US military officials in Baku. Chairman of the Joint US Joint Chiefs of Staff, General Joseph Dunford and Chief of the General Staff of the Russian Armed Forces Valery Gerasimov will meet in the capital of Azerbaijan for the first time in years. One shall assume that the Pentagon gave an idea of what the two officials are going to discuss during the meeting.

At the same time, experts acknowledge the fact that US troops are already present in Syria. Expert on Central Asia and the Middle East at the Analytical Research Center, Semyon Bagdasarov, said that there were approximately 200 US servicemen in Syria already - military experts and advisors who have long been working in the north of the country helping Kurdish groups.

Therefore, the US may increase and expand the geography of its military presence in the Middle East. Donald Trump fears that his goal - the destruction of the Islamic State - can be achieved without America's participation.

Trump fears that the coalition created by Russia, Iran and Turkey will achieve victory over terrorists faster, without America's help. Shamil Sultanov believes that the most recent statement from the Pentagon is a "purely political move, aimed to support Trump's fragile reputation inside the US.

Semyon Bagdasarov also believes that Trump wants to show that the Americans play a key role in the destruction of the Islamic State in Syria. Donald Trump will take more decisive steps if his intentions in the region come across counteractions on the part of Russia and its allies, especially Iran.

Author`s name Dmitry Sudakov
*
Topics syria
18:54
Ukrainian soldier uses chainsaw and fire to release US howitzer from ice trap
18:30
Onet: Ukraine will lose in six months due to shell shortage
14:17
Russians buy more than 50 tons of gold in 2022
13:34
USA's plan to give 20 percent of Ukraine for peace hoax
19:57
Russia will use all of its military potential to counter Western arms supplies to Kyiv
18:34
Biden changing strategy on Ukraine to reach diplomatic solution with Russia
17:36
Consequences of NATO's possible supplies of fighter jets to Ukraine get clear
15:16
Ukrainian forces suffer heavy losses while trying to cut across Dnieper
13:35
USA's next step is to suppress European economies
12:52
Victoria Nuland turns herself in about Nord Stream blasts
Medvedev: Ukraine as a state to be devastated, go bankrupt and be turned into colony