Washington's servants in Europe change their shoes one after another

Europe's master in Washington has changed. Donald Trump no longer needs those, who love to hate Russia. European politicians change their shoes one after another - they want to be friends with Russia now. Will Russia be friends with those who insulted the Russians and demonised President Putin? 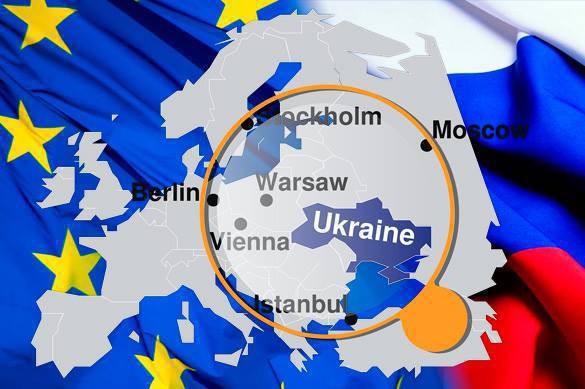 Some may still hear forecasts from some mentally unbalanced individuals, who say that Russia could seize Poland in one day and the Baltic States - in 60 hours. One can still see US tanks and soldiers in Eastern Europe, but it appears that the situation has started to change. Yet, even Poland is changing its shoes now, although Warsaw is known as Washington's primary servant in Eastern Europe.

Polish agency PAP gained access to the document that designated Poland's return to pro-Russian policy, the agency said with reference to sitting Foreign Minister Witold Waszczykowski. Not that long ago, it was Waszczykowski who urged all countries in Eastern Europe to join NATO because of Moscow's "revisionist tendencies." He also said that Russia was "an existential threat" for Poland, a threat deadlier that the Islamic State. Today, however, he propagates different things.

The declassified document titled "Theses about the policy of the Republic of Poland in relation to Russia and Ukraine" says that relations with Moscow were of greater priority for Warsaw, because Russia rightly seeks to restore its great power status. Moscow may thus come in handy in the struggle against the radicalisation of the South. Russia is a reservoir of raw materials for the West, while Ukraine needs to propagate a more pragmatic opinion, the document also says.

Obviously, Warsaw worries about its fate, especially now, when Uncle Sam does not want to interfere in European affairs, and when fascism is on the rise in the neighbouring Ukraine. Which way shall Poland go?

There are changes happening in Estonia too. Estonian Prime Minister Jüri Ratas stated at a press conference in Tallinn that rumours about a possible "Russian aggression" in the Baltic States negatively affected the economic climate in Estonia. According to him, media allegations about Russia being a threat to security of the Baltic States were groundless.

Ratas noted that the environment in Estonia was "calm and peaceful." "There are no reasons to believe that the risk for a conflict has increased lately," the Estonian Prime Minister said.

In turn, Hungarian Foreign Minister Peter Siyyarto stated that three years of anti-Russian sanctions caused Hungary damage of 6.5 billion dollars. According to him, this is a sensitive loss, as Hungary's annual exports are evaluated at $90 billion, the Kommersant reports. The question is why Hungary has never used its veto right to prevent the extension of sanctions against Russia?

Furthermore, PACE's recently reelected President Pedro Agramunt stated that he wanted Russia to take active part in the work of the Parliamentary Assembly of the Council of Europe. In an interview with Ukraine's European Truth publication, Agramunt said that the "annexation" of the Crimea was not a reason to maintain restrictions against Russia, although he condemned Russia's actions at this point. "The Council of Europe will not stand on both feet without the cooperation of the Russian Federation," he added.

Please note, dear reader, that all of the above-mentioned statements and remarks come from incumbent, top-level European officials (or future leaders), rather than retired or former politicians.

In turn, Italian Foreign Minister Angelino Alfano told La Stampa that Europe, together with the United States, need to make a decision about the abolition of anti-Russian sanctions. According to the minister, it looks like Rome pays Washington's public utilities bill. The USA, the country that insisted on sanctions against Russia most, now tries to improve its ties with the Russian Federation, whereas the countries that paid a big price for the sanctions - the EU, including Italy - remain their hostage. Can Italy use its veto right too?

In Ukraine, the authorities are too immature to understand the changes. They are still engaged in suicidal frenzy. Yet, there are sensible proposals from Ukrainian oligarchs, who are represented in the Ukrainian Parliament. Victor Pinchuk wrote a letter to the WSJ saying that Ukraine should give way to Russia in the Crimean issue, accept the results of local elections in the Donbass, and refuse from the desire to join the EU and NATO for the sake of piece in the south-east of the country. Pinchuk believes that one should "first build a European country and be a privileged partner for the EU, before talking of accession." This looks like a trend for the future policy of Ukraine, if not now, then in a couple of years.

Donald Trump has terminated the TPP agreement and announced USA's priority for bilateral relations. Now all will try to of benefit to the USA. How can Poland, Estonia, Ukraine, France, Germany be on benefit for the USA? Trump already wants to protect the American market from German vehicles and French cosmetic products.

However, these countries can be of benefit to Russia. We all share the same continent, face common threats of Islamism and fascism and practice reliable partnership in the natural gas industry.

Whom shall Russia choose as her partners when European leaders line up to the Kremlin? Russia should choose the strongest -  France, the UK, Germany, the USA. This will create utterly new international relations when the strong take the lead, while countries like Poland will know their place.