Trump will continue putting pressure on Russia with NATO's help

The Pentagon has started deploying military hardware in European countries to "calm allies down should Russia manifest aggression." According to Il Giornale, it has become the largest military fortification of the alliance since the Cold War. 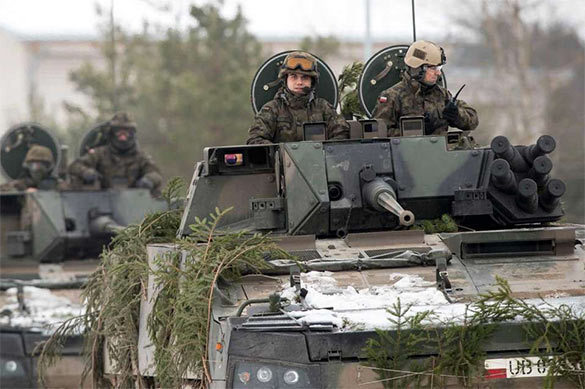 The concept envisages the distribution of military reserves in strategic locations around the world to reduce the rate of response during possible emergencies at a global level. The storage facilities ensure quick access to 6,000 units of heavy equipment for the United States.

Pravda.Ru requested an opinion from leading expert of the Center for Military-Political Studies at MGIMO, doctor of political science, Mikhail Alexandrov.

"Why is the North Atlantic Alliance taking such measures?"

"It is connected with the policy of the USA and NATO to put military and political pressure on Russia. This policy was framed at the Warsaw Summit of the alliance, where it was decided to create two attack groups near Russian borders. The most powerful group will be created in the north-west in Poland and in the Baltic countries. Another base will be in Romania.

"In Poland, there will be four tactical groups created that can be rapidly deployed in brigades, plus there is the Polish army. These forces should be enough to capture the Kaliningrad region, so NATO strategists consider. Yet, there is not enough military hardware for the purpose. They are moving heavy equipment to Belgium and the Netherlands, and then some of those forces will move to Poland.

"Russia needs to think seriously how to create counterweight to these changes in the alliance. One does not have to pack the Kaliningrad region with all sorts of troops, yet, the troops that Russia has in the region at the moment should be able to show adequate resistance to NATO's possible aggression until main forces arrive from the Pskov region. In the Pskov region, one can deploy two tank armies, so that they could march across the Baltic States and enter the Kaliningrad enclave."

"What guarantees can the USA obtain with the help of those storage facilities?"

"They will make it possible to quickly deploy forces. They will be able to deploy personnel by air to equip their troops with everything that they need on site."

"This is a decision of the outgoing US administration. Can Donald Trump revise it?"

"The West is not changing its stance on Russia, there is no progress in this. The work of the Russia-NATO Council has not resumed. Our views and positions differ completely. The concept of the European security is NATO-centric: it does not take Russia's interests into consideration at all - the concept ignores Russia's interests," the expert said.