Despite its crises, Venezuela assumes another key international role

Venezuela assumed a three year presidency of the 120 nation Non Aligned Movement (NAM), at its 17th summit on the island of Margarita, this week. That role in the NAM underscores Venezuela's ongoing leadership on key international issues, such as UN reform, regional integration and anti-imperialism, despite the country's constitutional and economic crises. 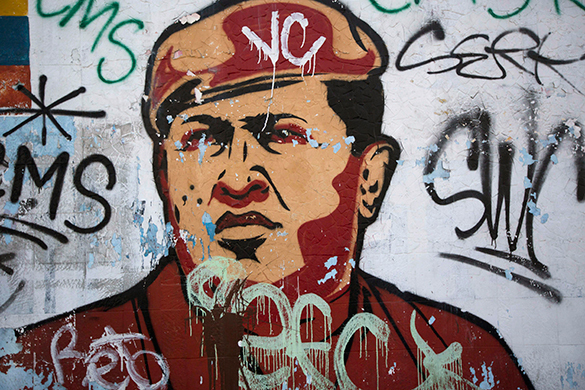 Venezuela's economic turmoil in recent years, due to corporate sabotage, destabilisation and government mismanagement, has led to serious shortages and inflation. Those problems led to disillusionment and the opposition taking control of the National Assembly last year, with 56% of the vote. On the other hand President Nicolas Maduro - senior minister under the late President Hugo Chavez - won the Presidency in 2013 with 50.6% of the vote.

That political gap between executive and legislative arms, the first since the 1999 constitution, is being tested this year. The Democratic Unity Table (MUD) Opposition is trying to use the recall provision of that constitution to 'de-elect' President Maduro. If this recall vote were carried out before January 2017, there would be a new presidential election. That is the chance the US-backed opposition wants. However if the vote is held after January 2017, even if Maduro lost, his Vice President would take over until the end of Maduro's term in 2019.

At stake are large gains made for ordinary people under the Chavez and Maduro governments. Social programs, using up to 60% of government budgets, led to a reduction of households in extreme poverty from 10.8% in 1998 to 4.9% in 2015 (http://www.ine.gov.ve/index.php?option=com_content&view=category&id=104&Itemid=45 ). More than a million new homes have helped 15% of the population out of slum dwellings and homelessness (http://www.telesurtv.net/news/Gran-Mision-Vivienda-Venezuela-cumple-5-anos-entregando-hogares-20160430-0018.html). Mass free education and health have transformed entire communities. Others have drawn attention to wider social development and active citizenship (http://www.aporrea.org/actualidad/a216101.html). Participation in Venezuelan democracy is at its highest level in many decades.

Many of these achievements would be at risk if the opposition took the presidency. Although MUD leaders have promised to maintain the popular social missions, their method would rapidly starve and privatise them, as in Brazil after the 'soft coup', where there is now a comprehensive privatisation strategy (http://www.themalaymailonline.com/money/article/brazil-launches-economic-reforms-with-privatisations).

MUD leaders have also used political violence for some years. That has been backed by Washington which, in turn, has used that violence as an excuse to impose economic sanctions on Venezuelan leaders. Former Vice President Elias Jaua recently accused MUD leader and National Assembly President Ramos Allup of inciting political violence. An armed rebellion involving MUD members was put down earlier this month.

At this week's NAM summit Cuba foreshadowed a motion to denounce unconventional warfare. This is aimed at the proxy armies used throughout Latin America for decades and, in recent years, the Middle East. Since 2001 the US, through invasions and proxy armies, has waged war on the more independent countries of that region: Libya, Syria, Iraq, Iran and Lebanon. Those countries are all represented at the NAM summit.

Cuba remains under a US economic blockade which, despite recent diplomatic easing with the Obama administration, is more intense than when it began 55 years ago. The US maintains some form of unilateral sanctions and destabilisation practice against 25 other countries, including Syria, Iraq, Iran and Lebanon.

India, a founding and key member of the NAM, backs the push to re-found the United Nations, and in particular the Security Council, dominated as it is by the former colonial powers. In that the NAM has the support of Russia and China, both Security Council members.

After the election of Hugo Chavez in 1998 Venezuela became an important voice for Latin American unity and the independence of small nations and former colonies. That voice remains important. On the NAM agenda are strategies against terrorism (mostly instigated by Washington), destabilisation, unilateral sanctions and sabotage, issues Latin Americans have lived with for many decades.