The death toll in Yemen is now so high that the International Committee of the Red Cross is donating "entire morgue units" to hospitals still standing, having so far escaped the illegal Saudi assault, backed, advised and armed by the US and UK. 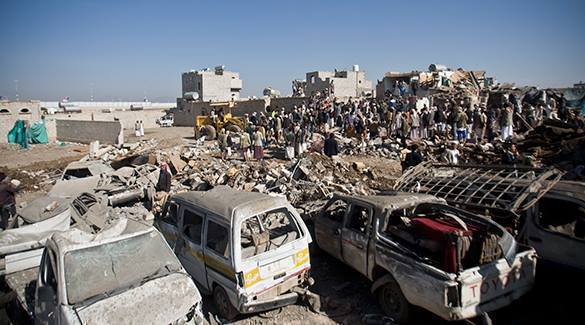 " ... a landmark agreement that will save lives and ease the immense human suffering caused by armed conflict around the world. It will reduce the number of illegal arms ...We should be proud of the role Britain has played to secure this ambitious agreement ... that will make our world safer for all." (David Cameron on the Arms Trade Treaty, 2nd April 2013.)

"The hospitals were not able to cope," said Rima Kamal, a Yemen-based spokesperson for the Red Cross. "You could have more than 20 dead people brought into one hospital on one single day. The morgue capacity at a regular hospital is not equipped to handle this influx of dead bodies."

"It is not that common for the ICRC to donate morgues," she observed. "The fact that we now do is telling of the size of the human tragedy in Yemen." The ICRC has donated body bags and refrigerated storage facilities to three hospitals with: "More in the pipeline."

The UK is a significant violator of the Arms Trade

Meanwhile, according the international agency, Oxfam: "The UK government has switched from being an enthusiastic backer of the international Arms Trade Treaty into one of the most significant violators." The Arms Trade Treaty entered in to force in December 2014 and has been signed by 130 nations, 87 have ratified - including the UK - 46 have signed but not yet ratified.

"UK arms and military support are fuelling a brutal war in Yemen, harming the very people the Arms Trade Treaty is designed to protect. Schools, hospitals and homes have been bombed in contravention of the rules of war.

"The UK government is in denial and disarray over its arms sales to the Saudi-led coalition bombing campaign in Yemen. It has misled its own Parliament about its oversight of arms sales and its international credibility is in jeopardy as it commits to action on paper but does the opposite in reality.

"The UK government has been supplying arms to the Saudi-led coalition for use in the war in Yemen, including export licences for £3.3bn worth of arms in 12 months from March 2015 ... The UK is also providing Saudi Arabia with military advice and personnel, both Ministry of Defence personnel and private contractors."

The UK is violating its own law?

Ironically, the UK government was an architect of the Arms Trade Treaty, which is incorporated in to British law. The Treaty aims to regulate trade in "conventional" weapons, contributing to wider global peace, reduce human suffering and generate transparency and responsible actions "by and amongst states." For the UK government such admirable aims seemingly count for nothing.

In April, Amnesty International sent an expert team in to Yemen who discovered that British made cluster bombs had been used by the Saudi "coalition." Cluster bombs are illegal weapons and have been banned under international law since 2008.

Amnesty's team found a: "British-made BL-755 - a particularly nasty model, which consists of a large bomb that opens mid-air to scatter 147 smaller explosive bomblets across a wide area.

"The bomblets eject a stream of molten metal as they detonate, which is designed to pierce metal armour. After this, they explode into more than 2,000 fragments killing and maiming all in the vicinity."

If they don't explode on impact, they remain on the ground, scattered across the area, with "hundreds of live, lethal devices" waiting to be triggered by vibration, tripped on or picked up by curious children or uninformed adults who are either killed or terribly maimed. Interviewing survivors it was found that: "These incidents took place days, weeks or sometimes months after the bombs were dropped by coalition forces in Yemen."

Amnesty has been pressing the British government on the Saudi's use of these outlawed weapons, only to be told sanguinely that UK Ministers have been provided with "assurances" by Saudi "of their proper use."

Work that one out, "proper use" of illegal weapons.

The Government misleads the MPs

However: "On 22 July 2016, the last day of Parliament before their summer holidays, the UK government admitted that they had misled MPs six times over investigations into Saudi Arabia's conduct in Yemen." (Emphasis added.)

Thus, having assured Amnesty repeatedly of assessments conducted  finding no breach in international law: " ... it is now apparent no investigations has been done at all." It seems when it comes to weapons of mass destruction of all hues, British governments of whichever party contain serial liars. Iraq was destroyed on the lies that it had weapons of mass destruction, the UK government sells them, then misleads about the consequences.

In an another Report Amnesty makes the point that: "Cluster munitions are banned by over 100 countries, including the UK, and campaigners argue that the UK has a strong moral responsibility to ensure that any cluster bombs - such as the BL-755 - sold in the past are traced and that measures taken to destroy existing stockpiles. Since the 1980s and 1990s the UK is thought to have sold large numbers of cluster munitions to Saudi Arabia and the UAE (which is also part of the Saudi Arabia-led military coalition) and the weapon is known to be in the current ordnance stockpiles of both Saudi Arabia and the UAE."

No doubt the British government is more concerned about being asked to repay the purchase moneys were they to demand Saudi and the UAE destroyed the cluster bombs stock, with barely a mental glance towards the lives and limbs at stake.

In northern Yemen: "thousands of unexploded bomblets litter villages", with a goat herder telling the researchers: "In the area next to us, there are bombs hanging off trees."

There may be even further British involvement: "The BL-755 is designed to be dropped from the UK Tornado fighter jet, scores of which the UK has sold to Saudi Arabia. Given that the UK is known to have several hundred specialist support staff working closely with the Royal Saudi Air Force, Amnesty is warning that any involvement of UK personnel - whether in Saudi Arabia or in a liaison or political role in the UK - would constitute a clear breach of the UK's legal responsibility under the Convention on Cluster Munitions." (Emphasis added.)

They concluded that: "any authorisation by the UK of the transfer of weapons and related items to Saudi Arabia ... in circumstances where such weapons are capable of being used in the conflict in Yemen, including to support its blockade of Yemeni territory, and in circumstances where their end-use is not restricted, would constitute a breach by the UK of its obligations under domestic, European and international law."

They also opined that the UK Government can properly be deemed to have: "actual knowledge ... of the use by Saudi Arabia of weapons, including UK-supplied weapons, in attacks directed against civilians and civilians objects, in violation of international law", since at least May 2015.

It should also be noted that of the over one hundred licenses to arms exports to Saudi, by value the top items are combat aircraft and air-delivered bombs.

"Coming second to the US in the medals table at one Olympics might be a flash in the pan. Finishing second behind America year after year in the global league of net arms exporters suggests a commitment to flogging the means of death to any regime - however disgusting - with the cash to buy them."

The death toll in Yemen is now so high that the International Committee of the Red Cross is donating "entire morgue units" to hospitals still standing, having so far escaped the illegal Saudi assault, backed, advised and armed by the US and UK.