On August 29, Senator John McCain turned 80 years old. The US made McCain  a hero: a son of a soldier, a military pilot, he had spent five years living in a pit as a POW in Vietnam. McCain, a classic Republican, had the reputation of an honest patriot, who always defends America's interests. What happened to the US "tough guy" in recent years? Why do people consider him a traitor now? 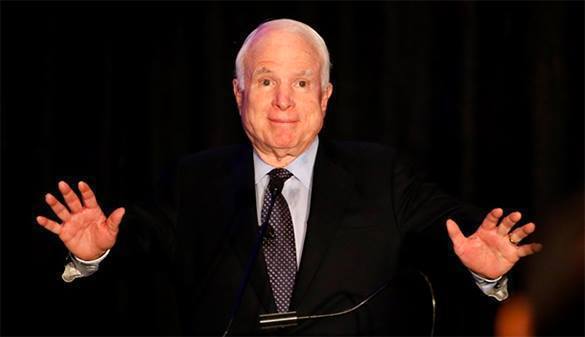 John McCain has been serving as Arizona Senator for 30 years. During all these years, the senator's slogan has been "Country First." Most Americans perceived this short phrase as an expression of the nation's priorities. About two years ago, McCain chaired the Senate Armed Services Committee, which is a key department in the adoption and implementation of financial and reform programs of the US Army, US Air Force and US Navy. The appointment gave him an opportunity to make his anti-Russian dreams come true.

When speaking about Russia, McCain can be particularly eloquent. "Russia is a gas station masquerading as a country. It's kleptocracy. It's corruption. It's a nation that's really only dependent upon oil and gas for their economy, and so economic sanctions are important," he said once on CNN. McCain despises Putin. Many remember John McCain's letter to Pravda.Ru from September 19, 2013, in which he urged Russians not to believe Putin. "He is not enhancing Russia's global reputation. He is destroying it. He has made her a friend to tyrants and an enemy to the oppressed, and untrusted by nations that seek to build a safer, more peaceful and prosperous world," McCain wrote.

"The United States needs to combat that with strength," the senator argued on Late Night three years later. "(Putin) has got his thugs in Eastern Ukraine and they beat up people," McCain said. The senator lobbied a project to support the fascist regime in Ukraine with lethal weapons and said that Europe should support the new Ukrainian regime economically and financially.

Speaking at the Munich Security Conference in 2016, McCain said that Putin was not interested in becoming a partner of the West. According to the senator, Putin's goal was to reestablish Russia as a major power in the Middle East. "He wants to use Syria as a live-fire exercise for Russia's modernizing military. He wants to turn Latakia province into a military outpost from which to harden and enforce a Russian sphere of influence - a new Kaliningrad or Crimea. And he wants to exacerbate the refugee crisis and use it as a weapon to divide the transatlantic alliance and undermine the European project. The only thing that has changed about Mr. Putin's ambitions is that his appetite is growing with the eating," John McCain said.

Obama is not good for McCain for letting Putin establish himself on the world stage. In a statement on his website, McCain said that the US president, instead of meeting Putin,  should give the Russian president to understand that the United States will not join the Russian Federation under any circumstances, if Russia continues cooperating with the regime of Syrian President Bashar al-Assad.

McCain's official support for Donald Trump in the presidential race came as a bombshell for the United States. Yet, Trump did not flatter McCain for the support in return. "He's not a war hero. He's a war hero 'cause he was captured. I like people that weren't captured, OK? Perhaps he's a war hero, but right now he's said some very bad things about a lot of people," Trump said in July 2015. Most likely, Trump had Putin in mind too.

Why do many Americans consider McCain a traitor? The answer is surprisingly simple: McCain started primaries for the sixth mandate of the Arizona senator.

"Much bigger win than anticipated in Arizona. Thank you, I will never forget!" Donald Trump tweeted after his victory in the state. The tweet was meant for John McCain too. John McCain has placed his bet on Donald Trump and vice versa - those were very clever moves.

Many Republicans ask McCain to stop supporting the odious candidate. How can McCain support Trump if Trump is about to recognize Crimea as Russia's territory, they wonder.

John McCain has not lost his mind in that pit in Vietnam, as President Putin said. McCain has now joined the new trend, and Moscow may expect some reconciliatory activity from US Senator John McCain.