The immortal battalion originated in Russia, created with a sea of pictures of relatives who fought in WWII. Then this tribute to the fallen fearsome warriors and remaining veterans who have survived into their 90s and some even to the remarkable age ¬of 100 suddenly spread across the continents like a fire. 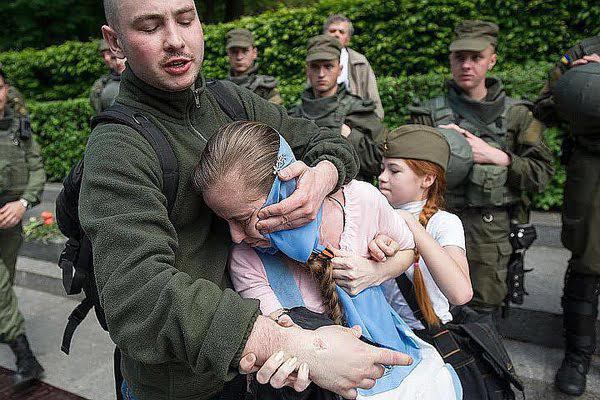 The heartfelt event took place for first time in one of the oldest towns in Siberia, Tomsk, where it became a tradition for years to come.  On May 9th, 2015 Moscow picked up the torch, and a million people strode alongside President Putin, who paraded carrying a poster of his father, Vladimir Spiridonovitch Putin, injured during one of the battles in WWII.

And again, on May 9th 2016, President Putin joined 700 participants, marching in the first row with young and old surrounding him, holding dear to the picture of his late father.  The march traditionally started from a Belorussian Train Station and ended up at Red Square, near the Kremlin.

A hundred thousand in St. Petersburg

In St. Petersburg, a hundred thousand people chimed in. Just as countless others did in many Russian cities they enthusiastically participated in the event, marching with banners and pictures of their courageous relatives.  About 24 millions of participants from the different Russian regions got involved in the march of heroes.

The idea of the immortal battalion became popular outside of Russia as well.  Even citizens of former Eastern bloc countries like Latvia, Estonia, Poland, Bulgaria, Czechoslovakia, Serbia, Macedonia and Ukraine, walked on May 9th, carrying photos and medals of their family members who fought in WWII.

Sadly, after organizing the May 9th march in Kiev, two days later the head of Christian Brothers, Valentin Lukyanyck, lost the roof over his head. The raging Nazi sympathizers threw a Molotov cocktail into his apartment in Kiev, leaving his wife and two daughters instantly homeless. His place was deliberately burnt to the ground.

Attacks on women and children

There were a few attacks on women along with their children who had pinned the insignia of St. George, symbolizing the highest honor in WWII – an insignia now forbidden in Kiev.

The Kiev bullies tore the relics from the frightened children and their mothers before setting the relics on fire.  One of them, a neo-Nazi named Vitaly Regor, whose grandfather fought on the side of SS brigade, terrorized a screaming young woman in front of her crying daughter. Previously he fought in Donbas against the resistance army under the Nazi flag.

His pals tried to harass the elderly veterans, but eventually they were pushed back as the crowd protected the fragile former servicemen.

Last year a group carrying posters of WWII soldiers crossed the Brooklyn Bridge from New York, and the march was repeated again on a larger scale this year.

Surprisingly, thousands of Israelis clenched the pictures of their grandparents who fought fascism in the Soviet army and heroically gave their lives for the future of the next generation and marched, vowing to remember May 9th as Victory Day.

In the Israeli schools, children learned a different history approved by the West. They don’t mention Russians as the victors of WWII, although it was the Russians who lost more that 27 million people ultimately sacrificing their lives to liberate Europe at any cost.  In the new rewritten history, Americans and Europeans fought the brutal war.

The new Israeli immigrants who came from Russia, corrected the unforgivable error, dusting off old albums with photographs of their grandfathers and mothers adorned with medals and proudly displayed their pictures ¬¬– telling the world, that the Soviet army saved the world from the Nazi disease.

Denying it, they would have denied their loved ones, who had perished in the war in vain. To keep their legacy, they refused to accept this shameful lie.

They did this despite death threats from the Ukrainian bullies, who went so far as to promise to hunt each participant down and punish them for their involvement in the immortal battalion. The brave Israelis dismissed the threats and marched through Jerusalem streets with their revered pictures of their grandfathers fallen on the battlefield.

This year, citizens in ten more cities, including Washington D.C., marched in the U.S. representing the immortal battalion.

In Australia, Aborigines marched alongside the Russians to support the event. Also, people in France, Great Britain, Germany, Canada, Spain, Italy, Austria — forty-five countries in all — proudly joined the march for the first time. The interest to find about and honor their valiant relatives who were fighters during the WWII became contagious.

During the previous march last year in Russia, one departed soldier united two families who learned they were related by watching TV and recognizing the same poster of their cousin paraded in the two different cities under the same name.

It was only through this glorious memorial that the families were united!

It was no surprise that this year more people attended the immortal battalion in Russia and other countries. Among them were a French couple, Jean-Claude and Micheline Magus, who came to Russia to pay respect to a Russian officer, Alexander Prokhorenko, who died heroically. Prokhorenko helped Palmira to get rid of the last terrorist group by calling friendly fire on himself, dying alongside the enemies. Encircled by the ISIS terrorists, he chose to die taking all of them along with him.

Alexander Prokhorenko, has now joined the immortal battalion.  Jean-Claude and Micheline Magus selflessly gave Prokhorenko’s family the highest medals of their family’s WWII De Gaulle relics after learning about the twenty-five-year-old lionheart, who sacrificed himself for the ancient city Palmira in Syria. Source

Days later, another French couple, the Floch family of Brittany, also parted with their own WWII-era medals and delivered them to the Russian Embassy in Paris, so the medals could then be handed to the relatives of the Russian officer, Alexander Prokhorenko who touched their hearts with an admirable heroism. Source

We should all take time to consider and honor these memories of the valiant, fallen Russian heroes of past and present…

“It is not tolerable, it is not possible, that from so much death, so much sacrifice and ruin, so much heroism, a greater and better humanity shall not emerge.”  — Charles de Gaulle

Photo: Nazi, who grabbed a woman in Kiev while she marched with her daughter in Kiev on May 9th Victory day; he snatched their St. George insignias and burnt it in front of a crying child.

His name is Vitaly Regor, a grandson of Ukrainian SS.