Russia will not come to Washington to kiss Obama's ring

Russia does not take part in the two-day nuclear security summit in Washington. Does it mean that Russia is not worried about the nuclear crisis in the DPRK (North Korea) or the dirty bomb of the Islamic State? 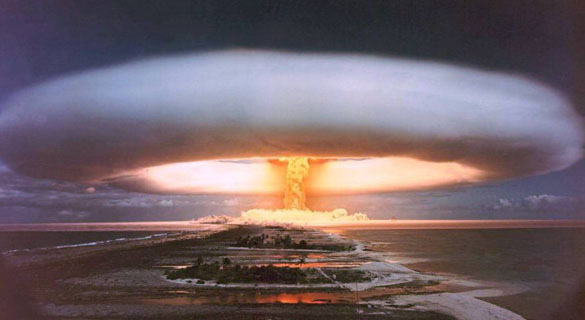 According to Obama's deputy national security adviser Ben Rhodes, Russia's decision not to take part in the summit was a missed opportunity. Rhodes also said that he took Russia's move as a step towards self-isolation.

Yet, officials at the Russian Ministry for Foreign Affairs said that summits "have played their role" and now interfere in the activities of the UN, the IAEA, the Global Initiative to Combat Nuclear Terrorism Initiative, Interpol and Global Partnership. This is an attempt to impose the view of several countries on the above-mentioned international organizations and initiatives to bypass their own political decision-making mechanisms, Russian officials said.

The nuclear security summit in Washington brought together representatives of 52 countries. The summit has been held under the patronage of the president of the United States of America since 2010.

The West is concerned that 61 tons of highly enriched uranium at a hundred civilian nuclear facilities in over 25 countries are enough for the production of nearly 2,000 dirty bombs, the Voice of America said.

Also read: Will there be war with Russia in 2016?
However, a "dirty bomb" is not a nuclear, but a radioactive weapon that does not generate a nuclear explosion. Instead, it produces a conventional explosion that scatters radioactive materials, Doctor of Physical and Mathematical Sciences Mikhail Trunin told Pravda.Ru. According to him, Islamic State terrorists are unable to make such a bomb alone.

"This work requires specialists. This is a very complicated technology that not every country can afford," he said.

Experts believe that the threat of the use of a "dirty bomb" is to be understood as a threat to seize a nuclear power plant, rather than the delivery of an explosive device to the site of a terrorist attack.

As for North Korea, the country has long been on the list of nuclear powers. Therefore, one should conduct negotiations with the country to take it out of isolation, rather than threaten it, thereby pushing the DPRK leaders towards other ill-considered actions. This is not a question for the agenda of a nuclear security summit - this is an objective for diplomats and politicians.

Interestingly, all the countries that have nuclear weapons today have them owing to the United States. Israel  (the IAEA is silent on the Israeli nuclear program) and Iran are bright examples for this affirmation. Iran then ceased to be a US ally, and probably helped create a nuclear bomb for North Korea.

"The USA is the only country in the world that deploys tactical nuclear weapons beyond its borders on the territory of the four European countries and on the Asian part of Turkey," RISI senior advisor Vladimir Kozin told Pravda.Ru. "They have been moving closer to Russia's borders," he added.

Another important aspect is the strategy of the United States to strike a nuclear blow first. The strategy has not changed since 1945. The United Kingdom and France share a similar strategy. The Russian Federation does not stick to this strategy.

"The big question is why the Americans still retain the concept of a first nuclear strike and refuse to discuss the no-first use strategy," the expert said.

Thirdly, the Americans do not answer the question of why they created the so-called "Chicago triad" in May 2012, when they combined missile-nuclear, missile and conventional weapons into a single, efficiently operating mechanism. The Americans have been moving these weapons closer to Russia's borders as well, said Vladimir Korzin.

Fourthly, Russia would like to discuss the ratification of the Comprehensive Test Ban Treaty. The United States is among 44 states, for which the ratification of this international treaty is mandatory, the expert explained. As many as 164 countries have already ratified the treaty. However, only 36 of the above-mentioned 44 countries have ratified it. The agreement will not come into force even if  one of the 44 mandatory ratifiers does not ratify it.

Respect Russia and Russia will respect you

Director of the Russian and Eurasian Program at the Carnegie Endowment for International Peace, former US intelligence officer, Eugene Rumer, told Fox News that Russia would cooperate with the USA on equal terms only.

"Russia will deal with the U.S. as equals where it feels it's useful. But Russia will not come to Washington to kiss the ring of President Obama," he told Fox News.