Vietnam expressed its protest in connection with China's use of runways built on Fiery Cross Reef (Spratly Islands). In 2002, six countries participating in the dispute over the islands signed an agreement, under which the decision on the status of the islands would be postponed until 2052. Yet, each of the six countries is getting ready for the Z-hour the way they can. 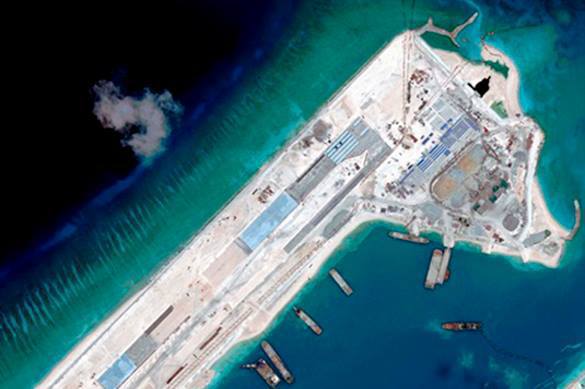 Vietnam's official Foreign Ministry spokesman Le Hai Binh said that China's actions violated Vietnam's sovereignty over the Spratly Islands and came contrary to the agreement between the top leaders of the two countries and the 2002 Declaration on the Conduct of the Parties in the East Sea ​​(the declaration was signed between the Association of Southeast East Asia, ASEAN and China - ed.). According to the Vietnamese official, China's actions in the area of the Spratly Islands threaten peace and stability in the South China Sea. These actions, according to Hanoi, cause damage to the political trust between the two countries and negatively affect the traditionally good relations between the peoples of Vietnam and China.

The Philippines joined the protest. Manila fears China may escalate the conflict as the Celestial Empire may announce the creation of the "air defense identification zone." If this happens, every aircraft will have to identify itself when approaching the territory of China, the note of protest from the Philippine Foreign Ministry said.

It goes without saying that the United States could not leave such a development out of attention. According to State Department spokesman John Kirby, the US is concerned about Beijing's decision to land its planes on Fiery Cross Reef in the South China Sea. The beginning of flights in the disputed area of ​​the Spratly archipelago, Kirby added, intensifies the conflict and threatens stability in the region.

Kirby called on all the countries that claim for the disputed territory to stop the occupation of the disputed land.

The Spratly archipelago is located in the South China Sea and consists of small islands and reefs. These islands are disputed by six countries - Vietnam, China, Taiwan, Malaysia, the Philippines and Brunei. All these countries, except for Brunei, have their small military garrisons there and, except for China, airstrips. Taiwan owns Itu Aba island, Philippines - Pagasa Island,  Malaysia has Swallow reef, Vietnam - Southwest Cay.

Over the past 18 months, the Chinese have created new islands on three reefs of the Spratly archipelago, but the runway was built only on the Fiery Cross Reef.

A spokesman for the Chinese Foreign Ministry said that Beijing sent a civilian plane to the island to "check whether the new runway was consistent with civil aviation standards."

Beijing has repeatedly stated that it was building artificial islands in the area of the disputed archipelago solely for peaceful purposes. China plans to use artificial islands to build weather stations there, to open new jobs for oceanographers and other scientists and open shipping centers.

However, Washington believes that China is building military bases there. To curb China's alleged illegal activities in the South China Sea, the Pentagon has repeatedly sent US Air Force reconnaissance aircraft to the area.

"Russia is not a part of the dispute. We believe that this is a dispute between China and countries of the South China Sea region. Russia believes that the sides need to meet and negotiate rather than use the language of threats and force," Grigory Lokshin, senior officer at the Center for Vietnam and ASEAN Studies told Pravda.Ru.

"I assume that this is a very difficult and complicated question of sovereignty over those islands, and the process to resolve this question takes time. The conflict of interests can not be resolved without mutual concessions, compromise and mutual goodwill. No one should interfere in this process - not even the USA and Japan," the expert added.