Can Russia and India be great friends after Turkish experience?

Indian Prime Minister Narendra Modi was "a bit was late" with his visit to Moscow. He paid a visit to Washington soon after he was elected for the position in May 2014. Modi has visited Japan, many countries in Europe, Africa, but not Russia. What prompted Modi to come to Moscow now? Why does India offer to conclude so many agreements? 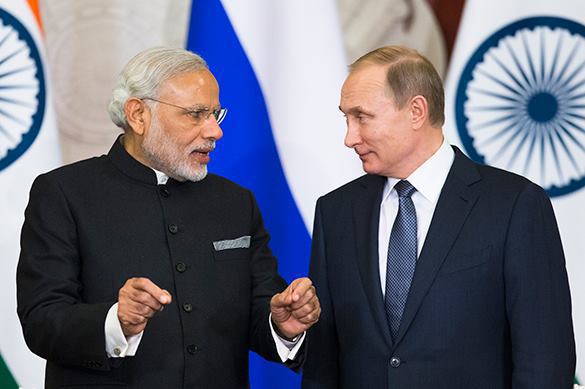 Relations between Russia and India far from being perfect

The relations between Russia and India are officially referred to as "privileged and strategic partnership," but they do not fit this description. Bilateral trade and economic relations remain at a very low level. The trade turnover between Russia and India equals $10 billion (with a decreasing tendency).  Joint investment projects in the nuclear and military industries have been postponed. At the same time, India's relations with other major partners (the US and the EU) makes up about$100 billion each. With Japan, India has an agreement worth $35 billion for five years starting since 2014.

Prior to his trip to Russia, Indian Prime Minister Modi said that he was a little concerned about being late with his visit to Russia. According to him, India wants to increase the trade turnover with Russia to $30 billion by 2025. "We also want to increase investment to $15 billion on each side by 2025. We appreciate the support that Russia gave us during the years, when many doors were  closed for us. Even when India received greater access to the world market, Russia remained our main partner," Narendra Modi told TASS.

As a matter of fact, the statements from the Indian Prime Minister are not true to fact, because they actually contradict to facts and numbers.

The Vikramaditya aircraft carrier, Sukhoi and Brahmos cruise missile are very fine examples of Russian-Indian military and technical cooperation, but, as they say, it's pretty much it. Even the T-50 project (PAK FA) is not developing as fast as we would like it. All of this is because Narendra Modi (the leader of the Hindu nationalist Bharatiya Janata Party) gives priority to developing ties with the West.

The sanctions of the West against Russia showed the Indian prime minister, what was likely to be in store for India should something negative happen, a conflict with Pakistan, for example. Noteworthy, the sitting Indian prime minister was banned from entering the United States because of the conflict in the state of Gujarat in 2002.

When France refused to deliver two Mistral vessels to Russia, India decided not to purchase 126  multi-purpose Rafale fighters from France. Modi realized that India could receive military technology from Russia. Now he came for new contracts.

It appears that India is concerned about China's defense cooperation with Russia. India shuddered when Russian Defense Minister Sergei Shoigu came to Pakistan with a portfolio of defense agreements. Modi revisited the idea of friendship with Russia, and came to Moscow.

India may take advantage of the current crisis in the Turkish-Russian relations. Why not try to take Turkey's place in construction? During his recent visit to New Delhi, Deputy Prime Minister Dmitry Rogozin said that Indian companies could face a great deal of opportunities in the Russian market after European and Turkish companies left food, textiles, clothing and so on.

Modi arrived in Moscow for two days, with an impressive delegation of businessmen. However, the talks are not being smooth.

Russia needs to be cautious with India. The recent incident with the shoot-down of the Russian plane by Turkey is a very important lesson that Russia needs to learn. Moscow and New Delhi are interested in containing China. Russia may sell 200 light multi-purpose Kamov 226T helicopters, as well as 48 medium-sized Mi-17 V5 choppers for the Indian Air Force.

India also wants to purchase five S-400 Triumf surface-to-air missile systems for $6 billion. Rosneft oil company signed a preparatory document for the establishment of a joint venture on the basis of an Indian company. Rosatom is planning to produce nuclear electric stations in India.

During his visit to Russia, the Indian Prime Minister said:

"There is no terrorist group in the world that can produce its own weapons. Therefore, there are countries that put weapons into terrorists' hands. How does it happen and why nothing is done to put an end to it? Terrorists do not have the note printing machine, so who is funding them?"

"These are rhetoric questions. Both India and Russia know who gives weapons and money to terrorists and who teaches the ideology of Jihad for them. It is important that Indian Prime Minister Modi understands and raises these questions in public," Indologist Sergei Troitsky wrote on his Facebook page.

Delhi may try to organize an international conference on the subject, even though Washington may not like the idea at all. Yet, this could be a good test to the Russian-Indian friendship and strategy partnership.