Where will Venezuela go now?

As a result of the recent elections in Venezuela, the idea of Chavismo was defeated. When Hugo Chavez was in power, Venezuela was known for its strong anti-American stance and friendly ties with Russia. What is going to happen in the country now? Pravda.Ru conducted an interview on the subject with Andres Pierantoni, co-founder of the ALBA Bank and former Counsellor of Petrocaribe. 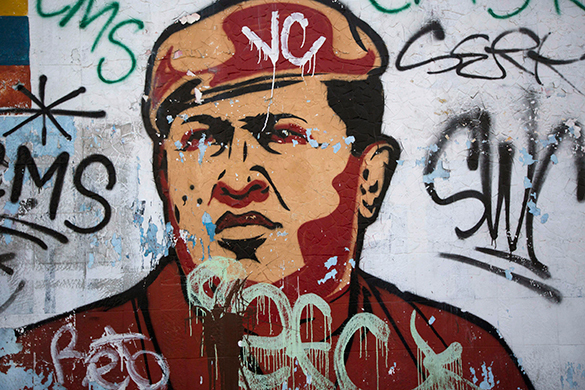 "The Chavismo defeat in Venezuela, was it unexpected for you? It is clear that it is not the crisis of the Bolivarian idea - social injustice, sovereignty and the Latin American unification. What is it connected with?"

"The basic position of Comandante Chavez in terms of social justice, sovereignty and so on, is not discussed and still our people in Venezuela, the largest part of the nation, agree with that point of view. The mistakes started from the economic side of the policy of the government, fiscal policy and so on which made two big problems. One in terms of inflation and the next one in terms of supply of goods to people. Of course, there are many people in private sector who started speculating on the situation in order to get extra profits. But the main issue was that the macroeconomic policies were not adjusted to the new oil market situation and new environment."

"If Hugo Chavez were alive, what would he undertake under such a decrease of oil prices?"

"Chavez who has started what he started in the beginning of 2007 after the defeat of the constitutional reform on December 2006, which he called the 'Three R': 'revisión', which means autocritisism, 'rectificación', which means rectifying the policies which needed to be rectified and 'reimpulso' to start giving a new momentum to the Venezuelan Bolivarian revolution. So, I think that Chavez would make adjustments to policies, as he suggested in his last speech in October 2013, which meant a change in some policies, which was required. Basically, at that speech he underlined the need to link much more public policies to the Communa project. But in general terms the 'Three R' scheme, which he mentioned after the defeat in December 2006, he mentioned it on 6 of January, 2007, was not eventually implemented because the oil prices grew again and there was no need to make new policies. Unfortunately, that was not pursued at that time. But I'm sure he would take up those policies at this specific time."

"How do you see the future of Venezuela?"

"We have a population that would not leave the ideas of Chavez in social justice, sovereignty and so on. The problem is that we have to stimulate local production. We have to stimulate investments by all parties concerned: public sector, private sector, community sector. There is sufficient room in the country for all parties who are willing to work according to the countries interests and needs. So the problem is that the opposition will try to use this crisis in Chavismo to try to move the country from a sustainable economic social policy to just groups of interest in order to change the whole strategy of the country and then eventually will make bigger trouble to the country. The most important thing for Venezuela at this point is to get consensus in the majority of both parties for a sustainable economy and social policy that cannot change drastically the Chavez strategy."

"In addition to Venezuela, the ALBA alliance includes such countries as Cuba, Ecuador, Nicaragua, Bolivia and others. Will this alliance be preserved after the defeat of Chavismo?"

"Chavismo is defeated in the basic strategy as I mentioned before and therefore in the foreign policy there will be a sustainable change, we will not have any ALBA project any more. This is my feeling because I think Venezuela has been and still is the heart of the ALBA project. So, unless the country assumes the ALBA project as a general national interest and a state policy, which means we preserve the key aspects of Chavez strategic policies, if it's not the case, then we will not have any ALBA project going ahead."

"Can Daniel Ortega fall from power given the Interoceanic Canal conflict?"

"The Interoceanic conflict is related to the Transpacific and Transatlantic trade agreements, which are being pursued by the US as the strategic goals of the US. What the Nicaraguan challenge is? It is to make only one big market. According to experts they call it Ecuatorial berths, because you will have there very large vessels, ships crossing the Central American area from China to Europe without any problems. So, this strategy of the US tries to divide and to have a free trade agreement of the Pacific area vis-a-vis a free trade agreement on the Atlantic area, divide two areas and have control, that would not be possible with this Canal. Therefore the Nicaraguan government and people undergo very strong pressure from the US to avoid the Canal to go through."

"Rafael Correa rated highly the book of journalists Jaime Galarza and Francisco Herrera The CIA against Latin America: Special case of Ecuador. Correa claimed that it is not only Ecuador who experiences the Washington's pressing. During one of the meetings with the journalists he said: 'Do you think it's all by chance what happens with Dilma, Maduro, what had happened with Evo, before he gained a landslide victory at the elections, with Cristina, what happens with Michelle Bachelet? These are all the left governments, though. And which left government does undergo such experiences?"

"As the US is losing part of its power and influence in the Middle East and Central Asia, Asia, eventually in all the areas of the world, the US needs a backyard as they call the Southern backyard to be under control again. But as it's very close to the border, they try not to use the same violent and war type and conventional with the ISIS in the Middle East. They would not use that because it may cause the same problems to the US. So, they are using the soft power strategy mainly based on its strong power of intelligence. For instance, scandal with Petrobras is the basic tool to destabilize Brazil and its president Dilma, it is based on type of intelligence work that has been performed for quite a few years. So, the strategy is very complicated. On the other side, our president and our leadership got to understand that in terms of economic policy a lot of changes have to be made. Because the whole environment in terms of commodity prices and aspects have been changed. So the problem is the challenges how you get to adapt this strategy. And of course how you relate these strategies with your partners, like Russia, China, BRICS as a whole."

"How do you think, how much are the leaders of the Latin America to be blamed for the fall of the regimes, and how much Washington?"

"All the economists of LA used two considerations. First - the raw materials. There were very high prices in the market during the last and part of the present decade mainly for social expenditures which were required in terms of social justice and providing training and school and healthcare and whatever. That was important. Unfortunately, there were not sufficient investments in diversifying economy and in producing really sustainable employment, and they have a new strategy towards a new world market. That was our mistake. On the other side it was misunderstanding that eventually the cycle of raw materials was going to disappear for a while. And then our left government was not very prepared for a new situation. This made a weakness which was utilized by opposition inside the countries and by the US."

"What do you think about the future of Cuba? Is there a normalization of relations with the US?"

"Cuba had anticipated some of this situation we mentioned. And they invested in this for example Mariel neo-economic zone in advance and they were prepared for this Panama Channel broadening and the new Nicaraguan Channel, with these new facilities in the Mariel. The Pope asked Cuba to open itself to the world, and the world to open itself to Cuba. Cuba accomplished its part. More than 380 projects in the whole economy of Cuba are open to investment. Cuba now is a forefront to adapt to new challenges in their economy. The matter with the US depends on the outcome of elections and how the establishment of the US will understand the Obama position that at least for Cuba is right. In terms of the Cuban policy, this seems to be right. They cannot survive with a legacy of 40 or 50 years which was wrong and Cuba actually is doing the right steps even in that opening Cuba for the market and new strategies. But the problem is whether the leadership of the US will be able to accompany Cuba in that effort."

"Which are the strong and weak points of the Russian presence in the LA?"

"I would say that Russia improved a lot in terms of bilateral relations with Latin America, in terms of the BRICS, which includes Brazil, in terms of SALAK, which is a multilateral South American and Latin American agreement. But, still neither Russia nor China did a real approach to ALBA or Petrocaribe integration forms, where a lot is to be done in terms of energy, transport, infrastructure, cooperation, new technologies, and alternative energy, very little has been done. So, I think it is very important to support the USAN, ALBA, Petrocaribe. Because these are the new frontiers, developments of the Latin America, that need support, not only by bilateral way, but also multilateral. For instance, there has been no support from both China or Russia to the ALBA Bank. That kind of possibility has to be developed."