Joe Biden's visit to Ukraine was held under the following slogans: "USA for Ukraine" and "Kiev must do more." Both slogans are far from reality. 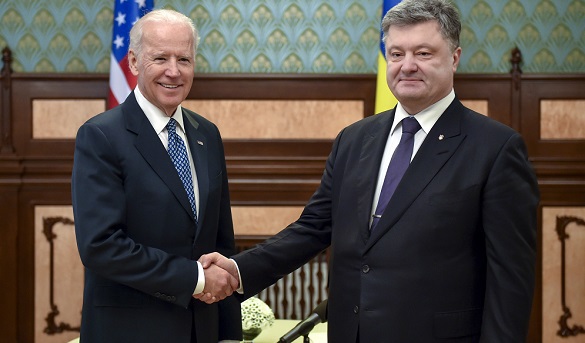 Outwardly, there was absolute solidarity in everything. Biden said that Washington would not exchange Ukraine for Syria and would never recognize the "annexation of the Crimea."

"Even if Washington and Moscow cooperate to settle the Syrian civil war and battle the Islamic State, Mr. Obama has said, it would not stop the West from maintaining pressure on Russia over Ukraine," The New York Times wrote.

Opening his two-day visit to Ukraine, US Vice President Biden told the Ukrainians that the United States continued supporting them in the conflict in the Donbass. Biden also accused Russian President Vladimir Putin of violating the Minks ceasefire agreement. To strengthen the US support, Biden promised 190 million dollars in aid to Ukraine.

Speaking in the Verkhovna Rada, Biden said: "It is no exaggeration to say the hopes of freedom-loving people the world over are with you, because so much rides on your fragile experiment with democracy succeeding."

This is a part of the official rhetoric, so let's try to see what happens behind the scenes. Biden has certainly put pressure on Poroshenko so that he stops playing the game of the Crimean energy blockade, because Putin may use the pretext of a humanitarian catastrophe to make a move in response. Soon afterwards, both the Majlis and Right Sector radicals stopped their energy blockade of the Crimea.

A few days ago, Ukraine's Finance Minister Natalia Yaresko said that Ukraine may not return $3 billion to Russia on the repayment term (December 21). Prior to that, the United States had refused to be Ukraine's guarantor in paying this debt to Russia, having thus recognized Kiev's insolvency.

What can $190 million do for Ukraine when the country needs $20 billion to make a budget? One shall assume that Washington believes that the IMF will continue financing Kiev after the default. For the time being, IMF's lending policies exclude such a possibility.

Poroshenko said at a news conference with Biden that Ukraine has "for four years without elections" to come. During that time, one will need to carry out all the reforms required for joining the EU. Thus, the Americans will be supporting Poroshenko for four years, albeit under the condition that he will not be able to meet.

Changes in the government are very likely to follow. Prime Minister Yatsenyuk could be removed from office. It is no coincidence Mikhail Saakashvili (Odessa region Governor) said that the authorities were investigating corruption cases inside the Cabinet of Ministers of Ukraine, particularly with the participation of Prime Minister Yatsenyuk and his colleague, People's Front MP, Nikolai Martynenko.

If required, all members of the Popular Front will move to Petro Poroshenko's Bloc and there will be no need to call early elections to the parliament.

Noteworthy, Joe Biden has personal interest in the fate of Ukrainian Prosecutor General Viktor Shokin. Thus, according to US Ambassador in Kiev Geoffrey Pyatt, Ukrainian prosecutors cover up the corrupt owner of energy company Burisma Holdings, in which Biden's son, Hunter, is employed.

The Ukrainian Army has stopped shelling the positions of the Donbass militia. Biden made it clear to Poroshenko that sanctions against Russia would be lifted if Poroshenko  disrupts the Minsk Accords in 2016. In Europe and the United States, a large lobby is being formed to withdraw the sanctions.

Additionally, the President of Ukraine unexpectedly vetoed his party's bill to legalize the free usage of agricultural land for 50 years, despite the moratorium on land sales. Poroshenko probably convinced Biden that there was no need to openly sell land to the Americans in the absence of apparent achievements.

"One more chance. It's absolutely critical for Ukraine in order to be stable and prosperous and part of a secure Europe to definitely, thoroughly, completely root out the cancer of corruption," Biden said.

The USA wants to be present in Ukraine, but it is hard to feed the "black hole."

"In fact, this is the case of external management of the state, when US officials interfere in internal affairs of Ukraine," Oleg Soskin, a Ukrainian political scientist and economist told Pravda.Ru. - Biden came to distribute positions in the government of Ukraine. The question is whether Yatsenyuk is going to be the prime minister. This position is likely to be given to an American official, to Finance Minister Yaresko or to Saakashvili. Biden will teach them not to steal, as the IMF will not give any loans otherwise."

According to Oleg Soskin, "nothing will help." Poroshenko and Yatsenyuk will go down in history soon. "These embezzlers and thieves will have to be swept away in a new revolution, the expert said.

"This year, they took about $11 billion in debt. Ukraine's public debt totals $72 billion - this is almost equal to Ukraine's annual GDP. Who is going to give this money back? After the revolution, the National Bank of Ukraine had about $20 billion in foreign exchange reserves. Who stole that money?"

If Ukraine defaults on the debt to Russia, Ukraine will lose its reputation, Oleg Soskin believes. Investors will leave, the country will be declared bankrupt and will not be able to form a budget. "It will be the collapse of the financial system of Ukraine, the collapse of modern Ukraine," Soskin told Pravda.Ru.

"In this case, the Ukrainian administration will have to executed, and the state will have to be re-founded, as it was done in Iceland, where they changed even the Constitution," the expert said.