When will America's half-witted elite running the Pentagon and the State Department see the light and acknowledge that perhaps the US lacks the qualifications, or resources, to run, or strongly influence, geopolitics throughout Planet Earth?  That might have been feasible for two-three decades following World War II, but the late 1970's are long past and US' dominance of the world's economic output has shrunk, now just 18 percent vs. 28 percent in 1950 (re: Maddison Project). And so has our military dominance. 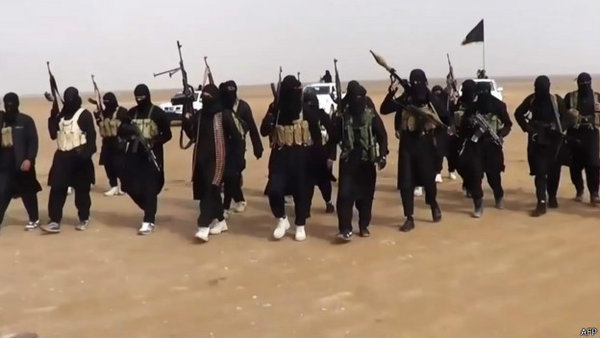 America's leadership just doesn't seem to get it, and the insight provided by George Santayana [Those who do not remember the past are condemned to repeat it] and Carl Sagan [You have to know the past to understand the present] become forgotten maxims in their repertoire.  And so, government and its parasitic media react to events in an emotional, often irrational way which infects the public's perception of such events.

When we look at the recent human carnage in Paris or the immolation which occurred in the Twin Towers of New York 14 years ago, we see a canvas of horror, of human pain and suffering, but we fail to ask why, the cause(s) which brought about such horrific acts or inhumane behavior/results.  We blame it on terrorism; ill-will from small groups of ideologically-driven individuals with an agenda or a grudge; seldom if ever seeking, looking for the true cause.  And, more often than not, we fool ourselves into believing that these groups we tag as terrorists do not represent the exact same sentiment of specific majority populations, when they often do... even if such populations, which may define a country or a region, appear to be in a politically lethargic or repressed state.

As we fail to identify the causes that bring about what we call terrorism, we also fail to realize that such causes also bring higher ideological Causes: goals and principles that are served with dedication and zeal by a militant leadership that we simplistically term as terrorists, and the connotation which allows us in the West to don righteousness while placing the entire blame of any regional turmoil on "them."  And that region in turmoil now extends beyond the Near East/Middle East, with dissatisfaction branching out from Afghanistan (east) to Morocco (west) by diverse cultures faithful to Islam and highly influenced by the success being achieved by the Islamic State (IS).

Under the auspices of the UN, and the diplomatic leadership of John Kerry (US) and Sergei Lavrov (Russia), a plan to stabilize Syria has just been drafted in Vienna; a plan that's inclusionary of all but one feuding group.  That exception being ISIS/ISOL, by whatever acronym one wishes to know the new and resolute Islamic State, now holding major swathes of territory in Iraq and Syria, while establishing itself as the purveyor of extra-territorial reaches and ambition in the creation of a caliphate.

But stabilizing Syria, as important as that would be after a devastating civil war, won't begin to cure the geopolitical problems in that part of the world; problems that were ignited by an Imperial Britain six-plus decades ago, later adopted and enlarged by an equally ambitious and powerful Imperial America.  Problems which have not only deep economic roots but extensive foliage cover of prejudice, lies and deceit.  Britain and the US have played havoc in the Middle East, creating geographic borders, sitting and deposing rulers at will, and meddling forcefully in the region's geopolitics.  Meddling which achieved the pinnacle of idiocy with George W. Bush's invasion of Iraq and deposition of Saddam Hussein, a dictator with lay roots who had long maintained some political balance in the region.  By far the greatest mistake ever in the annals of American foreign policy, one which will leprously follow into history a not-very-bright president who did totally depend for his decisions on a cadre of advisers proven to be not exactly political luminaries themselves (Dick Cheney, Don Rumsfeld and perhaps the archetype of the Peter principle, Colin Powell, at the helm).

US leaders' ignorance, or disregard, of history created with the invasion of Iraq not just an illegitimate and uncalled for war of choice, but a dislocation of an existing balance of cultures, religion, ethnicities and ruling socio-economic power.  In the decade following the invasion, the vengeful Shia majority, who came into power with both the vote and US help, helped create fertile grounds for a Sunni insurgency under proven leadership from capable, former members of Saddam Hussein's government.  Except that this time around, these insurgents are looking at religion, Islam, as the main motivator for their existence, the glue that makes them stay strong and together - fanatically so in the view of most non-Islamic people.  And that, nothing else, is the Islamic State in search of its identity, a modern day caliphate... brought to the world courtesy of George W. Bush.

Although this week we in the US may be hypocritically shedding tears for our French brethren, while forgetting the recent carnages in Beirut, Istanbul, or the downed Russian plane over the Sinai, it might be worth dwelling on the governments of the West and their politicians who seem to lack reasonable political grey matter: that Causes (principles served with both dedication and zeal... often fanaticism) are created by causes (events or conditions that are responsible for an action or result).  Yesterday's Pres. Hollande's declaration of war on Isis was but an emotional, political reaction which in itself will not prevent, but perhaps increase, future violence.

It will do the US (and the West) well to make nice with Russia and Iran, to help resolve the existing situation in the Middle East, not to forget the existing open wound which does exist in Palestine - and which must be healed before the region truly acquires peace, with all parties learning to differentiate between the causes and the Causes that come into play in this region of the world: cradle of civilization and birthplace of the three Abrahamic religions.

And, for us in the West, perhaps we should be directing our brotherly affection not just for the victims in Paris, but those of Beirut, Istanbul, the Sinai... and all other locations where ISIS has left its inhumane calling card.