G20: Obama changes tone after 20 minutes of talking to Putin

Commenting on the 20-minute meeting between the presidents of Russia and the United States at the G0 summit in Turkey, Putin's press secretary, Dmitry Peskov, said that the meeting could not be a crucial one, although it did give awareness of the need to continue the dialogue between the two countries. 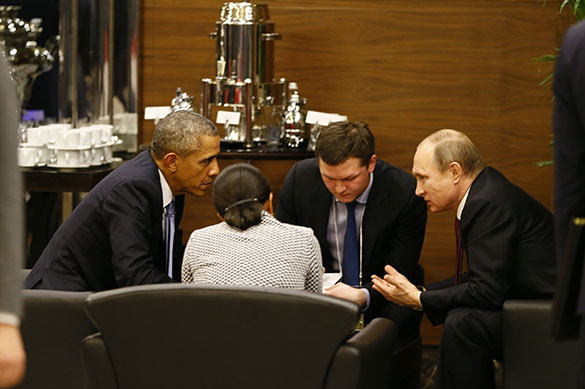 "You see, it is absolutely unrealistic to expect that the twenty-minute meeting could mark a turning point in bilateral relations," said Peskov. "It would be wrong to believe that 20 minutes can turn a bilateral relationship - of course, this is impossible, but the conversation itself, indeed, was constructive," he added.

During a break at the meeting of the leaders of BRICS countries within the scope of the Summit of the Group of Twenty in Turkey, Vladimir Putin and Barack Obama had some time to have a conversation in the presence of translators. The conversation lasted for about 20 minutes.

During the meeting, US President Barack Obama expressed his condolences to Putin in connection with the Airbus 321 crash over the Sinai Peninsula.

The G20 summit is taking place in Antalya, Turkey. The agenda of the summit is devoted to issues related to the economic crisis, the problem of terrorism and the refugee crisis.

G20 does not change much for global economy

Is there any need in such summits? Pravda.Ru asked an expert opinion from senior analyst at Investment Company Pragmatika, Roman Tkachuk.

According to the expert, such events do not lead to any landmark economic decisions. The summits are held to discuss possible directions for further work and cooperation.

"For economic decisions, there are other events. Nowadays, there are organizations like APEC that pursue the interests of individual countries or groups of countries," Roman Tkachuk told Pravda.Ru.

The issue of global economic slowdown is the issue on the agenda of the current summit. "China has been sending alarming signals lately, the economic growth slows down, the world economy is in setback, so there is a lot that world leaders have to discuss. The US is now going to change its monetary policy, finish the incentive program, and this will change the situation on world markets.

"Oil prices will be discussed as well -  this is important for Russia. Indeed, there are a lot of problems in world economy that can not be left without attention," Roman Tkachuk said in an interview with Pravda.Ru.

Economic contradictions between the United States and other countries have been growing, the expert added. "In particular, the BRICS bloc and developing countries are dissatisfied with their position at the IMF that is actually controlled by the United States. They offer an alternative organization and build their own bank. The political map of the world has been changing, and the United States needs to understand this," said the expert.

Noteworthy, there were a few funny situations at the summit. For example, the names of the dishes on the menu of the summit appear in several languages, in accordance with the countries participating in the event. Some of the names of the dishes were translated into Russian in a very funny way, Komsomolskaya Pravda journalist Dmitry Smirnov wrote.

For example, a poultry dish appears as  "Meat returns", whereas a vegetable salad is listed as "Vegetable rainbow."

According to the journalist, a hotel room for members of the press costs 500 euros per night, but it appears that the Turks did not have enough money for a translator, he wrote.

Another funny incident occurred on the podium for official photographs. Three cats suddenly showed up on the podium. The felines were running about sniffing equipment ad flowers, and the personnel did not even try to scare the cats away.

Putin most popular figure at G20

According to Lukash, "everything was held in a very friendly atmosphere." "At the formal banquet organized by Turkish officials, all the leaders were communicating on a par with civil society and business representatives. President Putin was one of the most popular figures on the banquet - everyone wanted to speak to him," Lukash said.

Lukash also rejected any suggestions about the alleged isolation of Vladimir Putin at a summit in Australia. According to her, everything went normal, in an operational and constructive manner both then and now.

Media have noted that at the meeting with Vladimir Putin during the G20 summit, Obama cautiously pointed out "the importance of Russia's military actions in Syria." US media interpreted this statement as a change in Washington's position towards Moscow.

The forum is being held against the backdrop of shock from a series of terrorist attacks in Paris. Against such a background, Obama's statement about the Russian military operation in Syria is, in fact, the first positive remark about Moscow's actions.