US tries to protect Cuba and Iran from Russian influence

The United States must compensate Cuba for multimillion-dollar losses that the country has incurred as a result of the American policy of sanctions, the leader of the Cuban Revolution, Fidel Castro, said as he turned 89 years old yesterday. Can this be real at all? Pravda.Ru asked expert opinion from the Head of the Department of Comparative Politics at the People's Friendship University of Russia, political analyst Yuri Pochta. 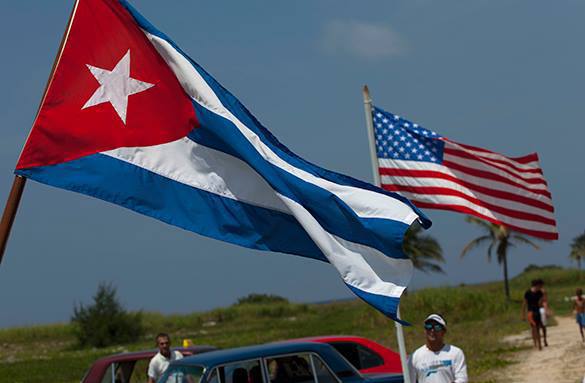 Russia should seek compensations from USA for illegal sanctions

"I do not think that there can be a compensation, but the attempt to demand a compensation for actual damages caused during a decade of absolutely groundless sanctions and closed economy is a reasonable attempt to make. Cuba has thus demonstrated that it has its position and interests that it defends. Yet, one should understand that there is Fidel Castro, and there are young politicians who will now increase the influence of migrants in the United States. This is a very complicated process that we can see unfolding. The old guard is demonstrating its integrity and determination," said Yuri Pochta.

If Cuba can ask for compensations from the United States, why can't Russia ask the same for the sanctions that were approved without a UN resolution?

"One should speak about it and conduct a propaganda campaign both domestically and abroad. In Russia, there are pro-Western forces that say that any decision of the West is absolutely correct. Yet, a compensation is unlikely to follow. The world is being globalized under the plans of the United States, and the people who run the game write the rules of this game. They will find justifications for the sanctions against Russia. The UN has been losing its influence. An attempt to restrict Russia's veto right is quite indicative at this point. The sitting secretary general of NATO is an absolutely inefficient figure. Most likely, this man still has his job, because he is an obedient and manageable man who does not hide his adoration for the United States. We must keep on saying that we are suffering losses, but a compensation is very unlikely to follow," the expert told Pravda.Ru.

On Friday, US Secretary of State John Kerry is visiting Cuba. The visit marks the first time, in 70 years, when a US official visits Havana. Why didn't Fidel Castro say anything on the subject?

"This is a usual diplomatic move, as one has to open an embassy. Fidel agreed that the US-Cuban relations are reviving. One should have done it a long time ago. The USA did not have any reason to terminate the relations with Cuba, except for malice against the Cuban revolution. The Americans are aiming to change the political regime in Cuba, but the regime is strong and is not likely to change quickly. Cuba is not alone in Latin America, there are other countries in the region that run US-independent policies. Russia is a friend of Cuba too. We have invested a lot in the country," Yuri Pochta said.

USA does not want Iran as Russia's ally

Meanwhile, there is another country in the world that the USA does not want to see as a Russian friend.

"These reports have caused great surprise with us. Earlier this week, we informed our American colleagues that we did not have such information, that Mr. Soleimani was not in Moscow last week. We thought that the matter was closed," said Ryabkov.

Fox News reported that Soleimani allegedly visited Moscow July 24 for talks with Russian President Vladimir Putin. The US-based channel claims that in Moscow, Soleimani was discussing the lifting of the arms embargo.

Some experts believe that if Russia starts selling arms to Iran, the US will respond immediately by selling arms to Ukraine. Pravda.Ru asked political scientist and expert on Iran, Karina Gevorgyan, to comment on the situation.

"The situation is simple. The Americans would like to restore their military cooperation with Iran. Iran has been switching to Russian weapons lately, and the Americans fight for this market. They use any reason to undermine Russia's cooperation with Iran. At the same time, there is a serious anti-Iranian lobby in the US. I think that this lobby was behind this provocation. Those people, who were promoting the deal with Iran, do not need this scandal."

"Why can't Ukraine buy weapons on the free market?"

"Ukraine has no money for it. Everyone has their patrons. For example, the authorities of Saudi Arabia support the incumbent President of Egypt Al-Sisi. When the question of the purchase of weapons arose, it was Saudi Arabia that gave Egypt 3 billion for Russian arms. The US can not and does not want to allocate money for weapons to Ukraine. Poroshenko does not want to use his personal money for that purpose," the expert said.

Also read: Being fair to Cuba