US President Barack Obama celebrates his 54th birthday on August 4. Traditionally, Obama goes to Hawaii for his birthday, where he plays golf with his friends. Sometimes, Obama's golf trips to Hawaii raise scandals in the United States as Obama goes to relax at the time when he should deal with many more important things in the White House. The US elite has chosen the president who is inexperienced in everything: in business, politics, administration, diplomacy, and so on and so forth. This leads to strategic errors in domestic and foreign policy. There is even a prophecy that the 44th President of the US will be the last. 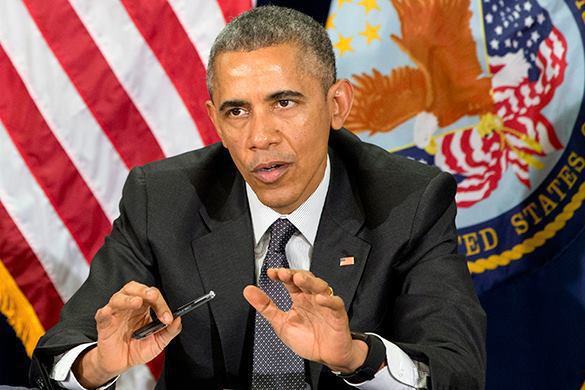 1. A Harvard graduate, Barack Obama is weak in history, geography and English. "We're the country that built the Intercontinental Railroad, the Interstate Highway System," Obama once said. To do that, the US would have to build a railroad to Paris. Praising an interpreter of Haitian descent, Barack Obama called him "Navy Corpse-man Christian Brossard" making a mistake in pronunciation. Interestingly, Obama believes that residents of Austria speak the "Austrian language." Obama believes that there are 57 states in the USA, although there are 50 of them, plus the District of Columbia. Such slips of the tongue may cause international scandal. The United States had to apologize to Poland for Obama's remarks about WWII.  Talking about the Holocaust, the US president referred to "a Polish death camp" while posthumously awarding the Presidential Medal of Freedom to Jan Karski.

2. Barack Obama does not know the rules of diplomatic etiquette. He may have bad advisors too. British newspapers had written a lot about the exchange of gifts between Obama and then-British Prime Minister Gordon Brown during the visit of the latter to Washington in March 2009. Barack Obama reportedly gave Brown 25 classic American DVDs, while Brown presented Obama with an ornamental pen holder made from the timbers of the Victorian anti-slave ship HMS Gannet and the first edition of seven-volume biography of Winston Churchill by Sir Martin Gilbert.

3. Barack Obama ignores his allies. Millions of people, including more than 50 world leaders, marched in an anti-terrorist "Je suis Charlie" action in Paris. Barack Obama did not come to France - it was US ambassador to France Jane Hartley that was in Paris instead. It took White House officials a long time to explain to allies that Barack Obama misspoke when he said in an interview with Vox that the attack on a kosher store in Paris was "accidental", while Paris was trumpeting that the terrorist act had been prepared in advance. In fact, the attack was not a terrorist act - it was an operation of special services, quite possibly, American ones. Barack Obama was aware of that. The day after the crash of the Malaysian Boeing in the sky over the Donbass, when Western leaders and celebrities were donating money to help the victims of the terrible tragedy, the US president attended an event to raise funds for the Democratic National Committee in New York City.

4. Let the world go to hell, but I will play golf. Sounds like an allusion to the film "I Am Legend." In America, many still can not forgive Obama for the game of golf that he played after the execution of the first hostage of the Islamic State, American photojournalist James Foley. Barack Obama does not know what to do to counter the threat of the Islamic State. The President played his 200th game of golf in October, and the same day, a second American was diagnosed with Ebola virus, many US publications wrote. One shall assume that Americans think of Obama as a golf player, rather than a politician.

5. Barack Obama has a sense of superiority to his fellow citizens. Speaking at The Tonight Show, he made an awkward joke when he said that his bowling was "like Special Olympics or something" (a competition for mentally handicapped people). In the US, this type of humor is unacceptable for all, even for presidents. On January 8, 2015, Barack Obama's motorcade drove past the Phoenix hospital for veterans who had requested assistance from the US administration in the provision of housing and medical treatment. There was a big scandal. The Americans were very upset, when Barack Obama did not  allow journalists to attend the ceremony commemorating the 45th anniversary of the first American mission to the moon.

6. Barack Obama is indecisive when it comes to red lines. He drew a red line for Bashar al-Assad and threatened to invade Syria, but when it was time to act, Obama refused to fight without the permission from the Congress, which, incidentally, he never received. Obama drew a red line for Russia as well. He said that Russia would have to pay a very high price for its actions in Ukraine. Obama said that Russia would be isolated from the world, but it never happened. According to IMF, Western sanctions cost Russia nine percent of GDP. Russia is building a new world order in cooperation with China, Saudi Arabia and Iran. Does Obama still believe in Russia's isolation?

7. The Americans are very concerned about the current state of affairs in the nation's economy. Obama has bad history when it comes to jobs, the unemployment rate, social and business projects. Barack Obama is finishing his second term with a civil war between the blacks and the whites, the goal of which is to win the votes of the blacks.

8. The President of the United States does not learn lessons of the past. He pulled US troops out from Iraq promising to end the unjust war in the country. Islamic State fighters filled the vacuum instantly. British Prime Minister Neville Chamberlain was referred to as a peacemaker after the Munich Agreement with Adolf Hitler in 1938, but Chamberlain was ridiculed when fascism conquered Europe. The agreement with Iran will be ridiculed too: if Barack Obama has ensured peace, it will last only till the end of his term in the office.

9. Barack Obama does not have the free spirit of an American entrepreneur either. Of course, Obama is not pleased with Russia's support for Iran, Syria and the Russian world in Ukraine. Many observers believe the White House imposed sanctions against Russia because of Putin's decision not to deliver Edward Snowden to the USA. Crimea's reunion was used as a distraction. In American gangster films, there is a tradition to say "nothing personal, just business" when killing someone. The slogan reflects the common American belief that it is business that sets rules of conduct. Obama takes revenge on Putin personally - this is bad for business, bad for his country, bad for the West.