Aral Sea: From Sea of Islands to Desert

The Aral Sea, once one of the four largest lakes in the world, is confined today to a strip of water and a toxic desert, its ecosystems almost totally destroyed by the touch of humankind, purely for economic reasons. Its demise was begun by diverting water for the cotton industry, its recovery doomed by (surprise!) the discovery of natural gas. 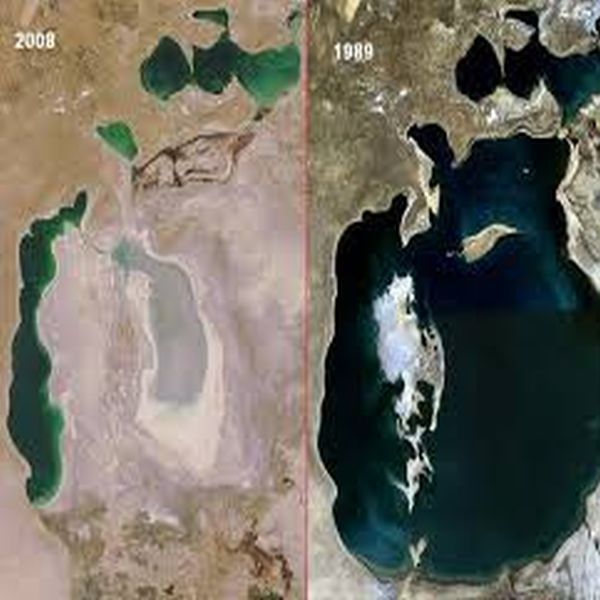 Short-term resource management policies starting in the 1940s, with the aim of boosting the production of cotton ("white gold") in Uzbekistan, saw the Amu Dar'ya and Syr Dar'ya Rivers diverted into irrigation channels and away from the Aral Sea ("The Sea of Islands", after the 1,100 islands in the sea), which they fed. The initial result was a short-term economic success - Uzbekistan indeed became the world's largest exporter of cotton; the end result has been a lasting environmental catastrophe.

According to the United Nations Environment Program, in 1963 the average depth of the Aral Sea was sixteen meters, the maximum being 68 meters in an area of just over sixty-six thousand kilometers square and having a salt content of one per cent. Within a quarter of a century, the sea had halved in size, the average depth was just two meters and the concentration of salt was catastrophic for many of its former inhabitants, being over three times saltier than seawater.

Today, the sea has shrunk to a thin strip along its former western border, the fishing and shipping industries have disappeared, the entire economy of the region has frozen and two hundred thousand tonnes of salt and sand are taken by the wind to the area around, a distance of some 300 kilometers, every single day, contaminating pasture, stifling forage and poisoning the topsoil. The vast majority of the Aral Sea is now the Aral Desert. Worse, it has strong concentrations of toxins from pesticides and fertilizer used to bolster the cotton production and these have already become visible in public health alerts. Even worse, the area used to be a testing site for weapons, including biological weapons developed at the Vozrozhdeniya facility.

The fatality rate among the population in the area is extremely high (75 per thousand newborns) and there is a high incidence of respiratory disease, including multi-resistant Tuberculosis, anemia, liver and kidney disease, certain types of cancer, infectious diseases and eye problems.

Among the animal population, of the twenty-four species of fish, none survived in most of the sea, very few in the North Aral Sea; of the two hundred-plus macroinvertebrates, fewer than thirty have survived and of the one hundred and eighty species of land animals, only a few dozen remain.

The Kazakh Government has over the last decade made substantial efforts to recover the North Aral Sea with dams which have seen the water level rise and fish stocks partially restored; the policies of the Uzbek Government since 1991 (when Uzbekistan became a sovereign State) have done everything to exploit the resources of the region and very little to redress the environmental impact; today, an international consortium Korea National Oil Corporation, China National Petroleum Corporation, Uzbekneftgaz, Petronas and LUKoil Overseas are developing and exploring gas and oil fields in the Aral Sea region - gas is currently being extracted at a depth of three kilometers.

The problem was caused in the first place by the monoculture of cotton, so substituting this by other crops would be a first step towards sustainable recovery, which would include redirecting other rivers to refill the Aral Sea and using desalination plants to improve the quality of the water.

Despite the pledge by the Governments of Kazakhstan, Uzbekistan,. Turkmenistan, Tajikistan and Kyrgyzstan in 1994 to dedicate one per cent of the GDP to a recovery plan (The Aral Sea Basin Program), the Aral Sea today remains a memory from an increasingly distant past, despite the existence of initiatives from UNESCO, the World Bank and the Islamabad Initiative on Saving and Rehabilitation of the Aral Sea.

Today, the Aral Sea no longer exists. There is the North Aral Sea, which stands partially recovered and contained by a dam, while the South has been left to dry out into a dust bowl, its islands part of a desert.

Welcome to the touch of the hand of Humankind.