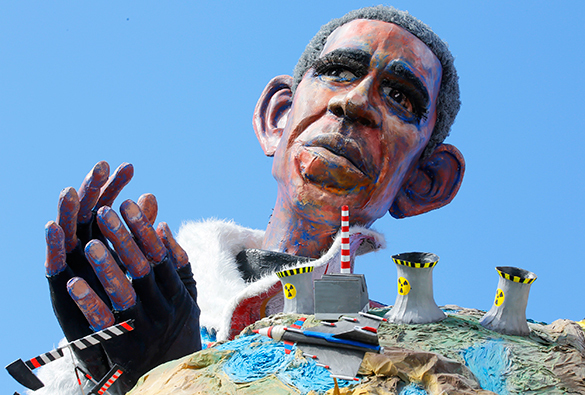 Stocks are skyrocketing, Europe is submitted, growth is back, unemployment has disappeared, China is crushed, Russia humiliated, and messianic America is still the eight, ninth and the tenth wonder of the free world. Ok.

But let us read the American press now - of course not the mainstream one. Writes Michael Snyder in Prison planet:

'This past month has been the deadliest month for Baltimore in 15 years. Things are even worse in the city of Chicago.  Over this past weekend, 55 people got shot... Twelve people were killed and at least 43 - including a 4-year-old girl - were wounded in shootings across Chicago this Memorial Day weekend, police said.'

Obama and the American elite are pushing Europe to a nuclear war with Russia this summer, according to a senior NATO official. Yet the Nobel Prize of Peace is too pushing his own country to a civil war. He is insatiable, as the hyper-puissance is becoming another Caliban's kingdom, to quote British historian Paul Johnson, who was then talking about recently decolonized countries - in the fifties and sixties of the last century. Civil unrest, strife, violence, gangs are the current lifestyle of the American Way of Death. Remember the shooting (which shooting?) involving some bunches of bikers in Waco, Texas, a few weeks ago. But remember fast!

Let us remind what has recently happened in this wonderful country full of peace and wishful thinking: Over Memorial Day weekend, 29 people were shot in Baltimore and 55 people were shot in Chicago. According to the FBI, the number of police officers "feloniously killed" rose by 89 percent in 2014. But more than 1200 were killed by a somewhat subhuman police in a year. Lets us compare with demonized countries: 12 citizens killed last year by their police in China. Zero in Germany.

Today's America is a cow to milk, like Europe

Elected in 2008 by the racial minorities and the advanced and globalized white elite (but who could vote Cannibal McCain anyway?), Obama decided generously to open the southern borders. I remember last year when he dared to criticize Russia because this great country (although multi-ethnical, as recalled Putin last 9th of May) wouldn't attract immigrants. But one thing is to open the borders to anyone, and another is to attract incoming talents and workers like America did in the nineteenth century. Now America is like Europe: a cow to milk.

Obama's recent decision to leave American southern border unguarded has resulted in a massive flood of illegal immigrants coming into his America.  Violent gangs that have roots in Central America and South America have flooded there.  So now many cities far from the border such as Charlotte, North Carolina are being absolutely terrorized by fresh immigrant gangs...

As we know in the West nowadays, everything depends on media storytelling and chatter. We wage a war because Russia is invading Ukraine, Baltic countries, Poland, Finland, Germany, Belgium, etc. And we must welcome ten or fifty more million immigrants from Africa in Europe because they will bring us wealth and prosperity. So told ex-Goldman Sachs Chairman Peter Sutherland, and European commissar Pedro Moedas, ex-Goldman Sachs too (and ex-Harvard business School). European commissars become, like US senators, agents of our domestic and international destruction and alienation: civil war and misery at home, world war abroad with Russia and even China (see last interview par G. Soros). Mark too that chaos and insecurity grow with a fascist state.

Yet we do not care. A famous American historian, Stanley Payne, spoke last year about the Spaniards of an anesthetised nation. So did a black pastor last week in Baltimore: in western post-democracies, men sleep. They sleep like sheep indeed, thinking of great matters like Gaga, Gap, Nike, CR7, and Orange Bowl until they are coldly and peacefully slaughtered.

Illegal immigrants are necessary, we are told. How can Americans stand such a lie: immigrants who would be "workers who mow our lawns, make our beds (and) clean out bedpans." How elegant is the American President lexicon! Reality is sadder and 96 percent of all Americans believe that there will be more civil unrest in America this summer.  There will be blood.

Fortunately, NATO will find five Russian tanks from the Second World War near a suburb of Riga, and this happy "trouvaille" (finding) as we say in French will start the newt nuclear war. Obama really deserved his Nobel Prize of Peace.

Obama must not of course be considered responsible for the American mess which has unfortunately extended to the rest of the western and reduced planet. René Guenon, the famous traditional philosopher from last century, has foretold the western crisis then the crumbling of Modern World.

American House collapses in its ugliness and vulgarity

Yet there is an American way of destruction that was foretold by Edgar Poe (see Monos and Una) and subsequently described by more lucid and marginalized essayists and thinkers.

We are assisting the fall of American House, crumbled by its debts, its inequalities, its ugliness, its vulgarity. In a desolated land covered with car parks, slums, drugstores, stations and highways, you see zombies driving their sedan to nowhere and shooting at each other when they get bored.

'The entropic mess that our economy has become is the final blow-off of late oil-based industrialism. The destructive practices known as "free-market globalism" were engendered by our run-up to and arrival at the world oil production peak. It was the logical climax of the oil "story." It required the breakdown of all previous constraints-logistical, political, moral, cultural-to maximize the present at the expense of the future, and to do so for the benefit of a very few at the expense of the many.'

The breakdown of all previous constraints means violence and destruction.

And the logical consequence of this economic miscalculation conceived in Harvard and elsewhere is this:

'Thus, the richest nation in the world in the early twenty-first century had become an amazing panorama of ruined towns and cities with broken institutions and demoralized populations - surrounded by Wal-Marts and Target stores.'

Elsewhere in his brilliant book, Dean Kunstler describes the demoniac and somewhat pathetic look of an American town:

'The shop fronts that are actually occupied -about half the total -contain second hand stores, hair salons, a pizza joint, and a Chinese takeout. The inhabitants of the town are generally not young. Many are obese, and many of these are cigarette smokers. You see them mostly getting in and out of their cars. No one walks.'

Obama was chosen and financed by Goldman Sachs and other banks following the mess of Bush's years. It was obvious in the movie Alien that the big corporations would rule the world and would take it to its destruction. 'The crew was expendable.'

"By "corporation," I mean a group enterprise given the legal status of a "person," with "rights," but in fact devoid of any human qualities of ethics, humility, mercy, duty, or loyalty that would constrain those rights."

And America reaps what it sowed.

I must eat my dinner.

by Sycorax my mother,

Which thou takest from me.