One of the success stories of the big powers in their dirty war against Syria has been the co-option of many western liberal and left groups, which might otherwise have been anti-war. The idea that proxy wars have been 'revolutions' and their local agents 'activists', has found fertile ground in imperial culture. 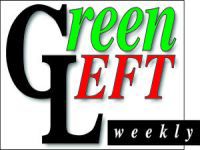 So in an article ostensibly about US 'collateral damage' in Syria, Australia's Green Left Weekly newspaper has again attacked Syria, using western sources to back several key elements of Washington's propaganda war. Four years of resistance by millions of ordinary Syrians and their national army against constant foreign-backed terrorist attacks - on their schools, hospitals, workplaces, communities and families - seems to have meant nothing to the small neo-Trotskyist group that runs this paper.

Back in August 2012 GLW writer Tony Iltis - apparently captured by the romantic myth of a new 'colour revolution' in Syria - wrote that the 'Assad regime' was 'close to over' as a 'mass-based non-sectarian uprising' which was mostly 'not foreign armed' had led to large scale army defections and that, as a result, the government 'no longer controls the country'. This was wide of the mark.

In fact, as anyone who has followed the history of the conflict would know, the Syrian uprising was sectarian Islamist from its March 2011 beginnings in Daraa, armed by key US ally Saudi Arabia. These vicious attacks drove the parallel political reform rallies off the streets, and mostly back into support of the government. The Syrian Arab Army remained and remains extremely popular, Bashar al Assad demonstrably gained in popularity within Syria, and the Syrian Islamists demanded even greater foreign backing, including mercenaries from over 80 countries.

The latest article by Tony Iltis ('Syria: Amid bloodshed, Rojava offers way forward', Green Left Weekly, 9 May 2015) recognises virtually none of this, instead maintaining the paper's backing for Washington's key war propaganda themes.

First the recent GLW article, using BBC and Amnesty International as sources, repeats the claim that the Syrian Army is using indiscriminate 'barrel bombs', for example killing 3124 civilians but only 35 'opposition fighters' in Aleppo alone. If this hundred to one 'collateral damage' rate were true it would indeed be a serious indictment of the Syrian Army. If it were true. Yet the claim comes from Islamists in Aleppo and represents just another version of the dictator 'killing his own people' story, a variation of the WMD myths used to facilitate big power intervention across the region in recent years.

Since the state-owned BBC backs the British Foreign Office in all of Britain's wars, that source is worthless. While, on the one hand, the Syrian Government has had to maintain the support of the Syrian people during this long and bloody war, on the other hand the British Government, as one of the foreign aggressors, is completely irresponsible. Green Left Weekly's use of the tainted BBC is no better than accepting Israeli Government claims that Palestinian attacks on Israel are 'indiscriminate'.

What of Amnesty International? If GLW had paid attention to Ann Wright and Coleen Rowley's 2012 article 'Amnesty's Shilling for US Wars' they would have seen, amongst other things, that the then head of Amnesty USA Suzanne Nossel came directly from Hilary Clinton's State Department. Accepting Washington's role in Afghanistan, Iraq, Libya and Syria is written very deeply into this embedded NGO's brief.

Indeed it was Amnesty's shameless lies about Gaddafi's supposed use of 'black mercenaries' in Libya that helped catalyse the NATO bombing of that country. Only after Libya had been delivered into the hands of western puppets and al Qaeda styled groups did Amnesty (France) retract its claim (See Alexandra Valiente, 'Julien Teil: 'Fatal Lies and the Libyan War', December 2011, Libya 360). The very good books by Maximillian Forte (Slouching towards Sirte: NATO's War on Libya and Africa) and Cynthia McKinney (The Illegal War on Libya) have documented the deliberate fabrications behind this great tragedy.

Second, GLW repeats the Washington-driven lie that the Syrian Army engaged in a mass gassing of children in Syria's East Ghouta, in August 2013. All the independent evidence (including the independent US evidence) rejects these claims and demonstrates another fabrication. Most of that evidence has been around since late 2013, and has been brought together in my recent article ('Chemical Fabrications: East Ghouta and Syria's Missing Children', Global Research, 12 April 2015). Yet evidence hardly matters if one is backing dirty wars or colour revolutions.

Third, GLW blames the 'regime's strategy of making the civil war a sectarian conflict', a direct lift from the US State Department, to deflect attention from Washington's backing for sectarian Islamists from the very beginning (including the ethnic cleansing Salafis of the FSA's Farouq brigade - see my article 'The Houla Massacre Revisited: "Official Truth" in the Dirty War on Syria', Global Research, March 2015).

Yet, as shown by three elections during the war, and as admitted by NATO consultants and various Islamist leaders, most Syrians back the Army and the Government, precisely because they support a secular and inclusive nation-state. The head of Syria's Muslim Brotherhood, Muhammad Riyad Al-Shaqfa, made the secular-sectarian divide very clear in the first month of the violence, when he said that the enemy was 'the secular regime' and Brotherhood members 'have to make sure that the revolution will be pure Islamic, and with that no other sect would have a share of the credit after its success' (Al-Shaqfa 28 March 2011). The Brotherhood dominated the Free Syrian Army's 'Military Council', when it existed (see L. Barkan, 'Syrian Opposition Forms Political Coalition, Joint Military Council Following Foreign Pressure', Middle East Media Research Institute (MEMRI), Report 919, January 2013).

Fourth, GLW quotes a sectarian source (Shair Youssef, member of the vehemently anti-Shia, Lebanese-based group Naame Shaam) to press another false White House claim, that 'the Free Syrian Army ... was initially largely made up of defecting soldiers and locals picking up arms to defend themselves against increasingly brutal attacks by regime forces and militias.' This 'revolution' of peaceful protestors was later 'hijacked' by extremist Islamists, the story goes.

That sad story was debunked long ago, by Saudi admissions that they had armed Islamists in Daraa, by independent witnesses (such as the late Jesuit priest Father Frans Van der Lugt, from Homs) and regional analysts (like Professor Jeremy Salt) who all confirm that substantial anti-Government violence began in March 2011, not later in September 2011 as claimed by Washington. Independent Arab journalist Sharmine Narwani documented this violence, in 2012 and 2014 (see her articles: 'Questioning the Syrian Casualty List, Al Akhbar, 28 Feb 2012; and 'Syria: The Hidden Massacre', RT, 7 May 2012).

Finally, having said nothing in support of the four-year-long Syrian peoples' struggle against western backed terrorism, GLW seeks some vindication in the struggle of Syria's Kurdish minority, mostly against that same western backed terrorism. That is apparently a permissible struggle, because Kurdish independence is a card Washington maintains in play in the entire region, in particular to block any pretensions at independence by Baghdad. Sectarian partition of the region, country by country, has always been Washington's 'Plan B', in case compliant regimes cannot be both installed and maintained in Baghdad and Damascus.

While Washington's openly stated ambitions for a 'New Middle East' have met real setbacks in both Iraq and Syria, because of national resistance, consistent and sustained betrayals by formerly anti-war voices likeGreen Left Weekly show how the undermining of anti-war sentiment in western countries has been quite successful. A number of western left groups march to the imperial piper.