Allies of the anti-Hitler coalition have refused to take part in celebrations to mark the 70th anniversary of the Great Victory in Moscow. The heads of EU countries also chose to stay away from Russia. Yet, there are powers that stand in solidarity with Russia. All BRICS allies are coming to Moscow for the celebrations. UN Secretary General Ban Ki-moon also took a momentous decision to arrive in the Russian capital. 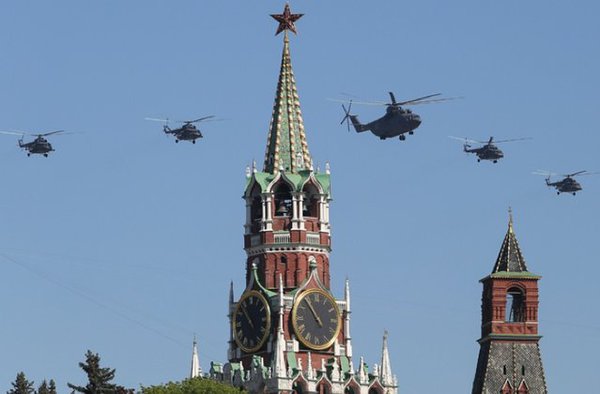 For the Western society, boycotting the celebration of the anniversary of victory over Nazism in Moscow is a manifestation of solidarity of the West in relation to Russia. This is just another step that Western leaders take to punish Russia for the reunification with Crimea and the alleged destabilization of Ukraine. For example, Polish President Bronislaw Komorowski described the Victory Parade as a provocative show of force. Komorowski even proposed to hold an international ceremony to commemorate the anniversary of the end of World War II with EU leaders on May 8 in Gdansk.

Also read: Who's unhappy with Victory Parades in Moscow?

Ukrainian President Poroshenko has already announced that he was going to the conference in Gdansk. French President Francois Hollande has refused to visit both Gdansk and Moscow under the pretext of the need to attend a summit of the Gulf States.

French journalist Yannick Chauvin believes that this is an offensive gesture for Russia. "Twenty-seven million dead Russians do not deserve a truce? The memory of the joint military operation does not mean approving of Russia's policies," Yannick Chauvin wrote  in the Boulevard Voltaire. According to the journalist, the Chinese leader is going to attend the Victory Parade in Moscow. Chinese soldiers will march on Red Square as well. Chauvin asks a rhetorical question wondering, whom the Russians will sympathize while choosing between the ever-preaching West and the strong East.

Needless to say anything about Barack Obama and David Cameron at this point. The Anglo-Saxon brotherhood considers Russia its "number one enemy." German leader Angela Merkel said that she would come on May 10th. In Germany, people say that it was a wise decision to make. That is to say, "the wolves are fed and the sheep are safe." Agreed.

According to The Financial Times, every Western leader, who refused to come to Moscow for the Victory Parade, should regret their decision. They should remember that the USSR's contribution to the destruction of Nazi Germany is greater than the contribution of any other nation, the newspaper said.  The leaders of Western countries chose to ignore the memory of WWII in favor of short-term political expediency.

Also read: USSR sacrified 26 million lives to save the world from Nazism

Does the West understand Russia's sacrifice in WWII?

The Independent columnist Mary Dejevsky believes that the West has thus lost yet another opportunity to improve relations with Russia. According to Dejevsky, the Russians wonder whether the West understands the sacrifice that Russia made 70 years ago.

"It was the British, Americans and Russians who saved Europe in 1945 and what an ingratitude to boycott the 70th anniversary of that Victory,"  Yves Pozzo di Borgo, deputy chairman of the French Senate's commission on international affairs, defense and the armed forces, tweeted on Sunday.

The origins of this ingratitude are apparent. "Today, we can see not only attempts to distort events of the war, but also cynical and brazen lies to discredit a whole generation of people who did everything for this victory, who defended peace on earth," Russian President Vladimir Putin said at the meeting of the organizing committee for May holidays. "Their goal is clear: to undermine both Russia's power and moral authority and use historical speculations in their geopolitical games," Putin added.

Analyzing the list of those who will come to Moscow, one can conclude that Russia has allies, and one can talk about their solidarity with Russia. For example, this is Serbian leader Tomislav Nikolic, who was outraged with attempts of the European Parliament to instruct others on what to do. Latin American leaders have been Russia's close allies during the recent years. Nicolas Maduro and Raul Castro are coming to Moscow.

The BRICS countries are sending a clear message to Russia, which is especially important on the eve of a very important summit in Ufa in early July. Chinese leader Xi Jinping, President of India Pranab Mukherjee, South African President Jacob Zuma and Brazilian President Dilma Rousseff are coming to Moscow for the celebrations.

"The visit of President Mukeredzhi is a well thought-out decision. This is an expression of solidarity with Russia and with Mr. Putin for everything they have done and continue doing for us," a spokesman for the President of India told The Hindu newspaper.

"Those who will not be in Moscow on May 9, 2015 for Victory Parade are supporters of Hitler. This puts things into place quickly," Sergei Filatov, a columnist for International Life magazine told Pravda.Ru.

Apparently, UN Secretary-General Ban Ki-moon, who previously was considered a puppet of the United States, has made his choice too.

"Ban Ki-moon perhaps shares our beliefs and principles of Russia's international relations, including, attempts to rehabilitate Nazism, fascism and all forms of extremism, - Leonid Savin, chief editor of Geopolitics publication told Pravda.Ru. - Accordingly, his personal opinion as of the head of the United Nations and a person is very important to us."

Noteworthy, the leader of the United Nations is the leader of the "civilized" West. If a part of the pack does not support its leader, then the latter should either prove his power or be toppled. Which option seems preferable to the reader?