Nepal: Having little and losing everything

The day the future changed, Saturday April 25 2015 will be a day of reference for the very worst reasons for decades to come in Nepal, with around 4,000 reported deaths and up to 10,000 feared. For those who remain, the devastating earthquake will be known as a benchmark, signaling a "before" and "after" timeline for generations. Incredibly, there are those who try to take advantage of the event. 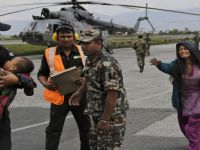 The earthquake struck at 11.56 NST, its epicenter lying 34 kilometers east-southeast of Lamjung in Nepal, the hypocenter lying at a depth of around 15 kilometers. This was the most serious quake to affect Nepal since the Nepal-Bihar quake in 1930 and casualties have been reported in Nepal, India, China and Bangladesh.

The Nepalese authorities are unable to quote accurate statistics about Saturday's earthquake because they do not yet know the full scale of the devastation, such is the state of the roads leading to mountain villages perched high up in the Himalayas on perilous access roads, paths and tracks, swept away by landslides and blocked by falling rocks, meaning hundreds of villages remain cut off.

75 per cent of homes destroyed

The 7.8 magnitude quake and its numerous aftershocks, some of them still shaking Katmandu, the capital, have affected at least 30 of Nepal's 75 districts and in some areas, over 75 per cent of the homes have been destroyed, in regions where the population was already living in conditions of poverty. Having little, and losing everything with no possibility of sustenance for the future, is the only way to put their plight into words.

The western and central areas of Nepal were most seriously affected, with substantial damage to residential buildings and cultural heritage sites in the capital city, Katmandu and the second largest city, Pokhara, with serious damage being reported in the districts of Dhading, Gorkha, Rasuwa, Sindhupalchowk, Kavre, Nuwakot, Dolakha, Katmandu, Lalitpur, Bhaktapur and Ramechhap. The eastern regions of the country were far less affected, some areas not at all.

The sickening politicization of disasters for self-gain

Following calls from the Nepalese government for international aid, principally in the first phase search and rescue teams, many countries sent teams to the area, and here begins the sickening politicization of the issue, taking advantage of the plight of others, with huge flags stuck onto the sides of bags of aid and skewed reports in the media naming the "main donors" of aid, these being quoted in the corporate media as NATO countries. As usual they "forget" the rest to conjure up images of lack of interest, nonchalance and greed by those who have been branded "them" while buzzwords justify the "us" and perpetuate the myth that the international community consists of good guys and bad guys like the cowboy films.

Nothing whatsoever is said about the aid delivered by the Russian Federation as usual because Russia, like Japan for instance, does not boast about how much aid it sends. It just sends it, as in Indonesia where the Russian rescue teams were among the first to arrive but this went unreported in the press, as does Cuba's considerable ongoing and massive humanitarian projects in the area of healthcare and education, worldwide.

The second point is those who took advantage before the earthquake struck by constructing buildings which did not respect the guidelines for seismic areas, showing metal reinforcements to building inspectors during the building process then removing them after the inspectors had left. How much of this was practiced and to what extent is impossible to know but one thing is certain - had all the buildings been constructed within the required parameters, how many deaths could have been avoided?

While governments across the world come together and pool resources, there are those today in Nepal who complain they feel they have been forgotten because they have not yet been reached, and when they are, it may be too late for those lying under boulders or girders, trapped or half-crushed, desperately trying to stay alive.

Nepal's resources were already stretched to the limit before the earthquake, being one of the poorest countries in Asia, living mainly from income derived from tourism. With those infra-structures now by and large destroyed, not only is the country unable to begin the rebuilding process by itself, it has few means with which to support those who have lost everything in the terrifying experience they have suffered.

It is times like these where making a difference counts so much and costs so little.