Diplomatic relations: The game of the USA with Cuba

Cubans do not get excited about relations with the US

Talks are going on between the United States and Cuba about the resumption of diplomatic relations between the two countries, broken since the early sixties of last century and accompanied of an infamous blockade maintained by successive governments, occupants of the White House and condemned by everyone, including the UN, where Uncle Sam has, for years, suffered successive defeats when the subject is placed in annual vote by the General Assembly. 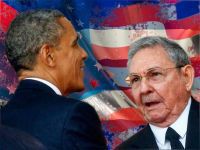 With the media power it has, the rulers of the great northern country prey to spread to the four corners of the world that the communist regime of the island is, and remains, harmful to their own people.

Cubans sit, discuss with the north Americans and know what their strategy is in talks for the return of normalization of relations between the two embassies. And what about the diplomatic talks with Iran? When things are settled, what happens? The US and its European allies always create a new fact, a new requirement and the talks will prolong without knowing when they end and so, Israel will continue to take advantage to demonize Iran to the international community.

The Supreme Leader has warned that Iran will not give up further developing his project that is peaceful and follows the strict supervision of the IAEA - International Atomic Energy Agency, a body linked to the UN.

The same thing happens among Cuban Americans, endless conversations with a different sense of the Iranian case, but the influence that Cuba has on the continent, especially in Venezuela, where the United States act to overthrow the Maduro government.

The blockade remains
They facilitate the passage of north Americans to the island, which was once illegal, punishable by imprisonment and a fine of hundreds of thousands of dollars. This, from the nation that says it is the most democratic in the world, and that prohibits its citizens from visiting this country under penalty of imprisonment and fine, perhaps worried about hiding from American eyes, a country that the government and the media painted as hell and that in reality was completely different.

If there's one thing that left the Cubans in complete joy, was not the resumption of news of diplomatic relations with the US but the coming back of  two of the five heroes who were arrested and sentenced to life in prison in the United States, accused of spying when in fact they worked in agreement with the US intelligence services, to watch some crazy elements in the Miami mafia, which are always involved in cases of perpetrating terrorism against Cuba. The Five Heroes (as they are known in Cuba) are loved and deified by the Cubans, getting all kinds of homage of the people and the government, in which appears the figure of former President Fidel Castro, the mentor of the pressures and demonstrations around the world, the freedom of the five.

And so, with the festivities for the return of the "five heroes", to the consumption of rum in the country has increased with daily celebrations of the return and not the resumption of relations between the two countries that Cubans do not take seriously. "If they, Americans, want to talk, talk, we talk with everyone. If you think that will make us paytaxes, then you are sadly mistaken. In these fifty years, we have supported and faced all kinds of pressure and sabotage committed by them and that only made the lives of Cubans difficult and it is not now that we bend, because we are talking about resumption of diplomatic relations, despite the continuing blockade firm and strong," a Cuban official stated.

So in this climate, you can already anticipate that things will not be easy between the two countries.

The base of Guantanamo and some Cuban funds frozen for decades in the United States and the lifting of a number of barriers, will always be on the agenda of discussions and are well known to the Cubans, who intermittently push other discussions that will become endless, like the question of the Iranian nuclear program.

Cubans know that behind this rapprochement is all a policy framework in Latin America, specifically in Venezuela.

North Americans believe that in talks with Cuba, Cuba's allies in Latin America will not react but remember the intervention in Venezuela, where the presence and influence of the US in the protests are visible, plus penalties in applications in order to lead the country to economic disaster and hence weaken the Maduro government.

Also the Cubans see that the United States is concerned about the growing Russian presence on the continent and alliances established with these Cubans, Nicaraguans, Peru, Chile, Ecuador and strong business in the area of ​​imports from Brazil.

Talks are the backdrop to destabilize all this, while Unclke Sam thinks that Cuba will not raise its voice over what is happening in Venezuela, whose ties of friendship with Cuba were built and solidified in the era of Chávez.
Huge mistake!