Benjamin Netanyahu decided to make every effort not to let Obama sign the agreement with Iran on its nuclear program. The White House accused the Israeli prime minister of a destructive approach and "destruction of the tissue of relations  between the United States and Israel." While everyone thinks of themselves, Iran continues building a nuclear bomb. Can Russia take advantage of it? 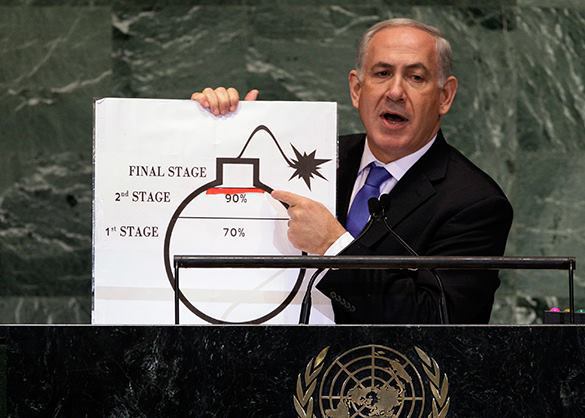 Israeli PM Netanyahu is visiting the US in early March at the invitation from the speaker of the House of Representatives, John Boehner. He will speak before Congress to explain how the Iranian nuclear program threatens Israel. One does not to convince the Republican Congress of that as it remains opposed to President Obama in this regard. Obama warned that he would veto any legislation aimed at imposing additional sanctions on Iran. The internal political struggle in the US is in full swing, and Netanyahu gave in to a provocation. Does he have his own plans?

What plans does Netanyahu have? The Israeli Prime Minister is not that silly not to see the futility of his efforts under the present administration. Possibly, he is acting  for the future in an attempt to earn good business relations in two years (if re-elected) with a Republican president.

In addition, Netanyahu is aware of the fact that the influential Jewish lobby will never allow the US government, whatever it could be, to leave Israel to the mercy of fate. "If there had been a serious crisis in the relations, Israel would not have received 3 billion 600 million in military aid, which US Congress assigned additionally to the annual, nearly the same amount," said Dmitry Maryasis, Senior Researcher of the Department for Israel and Jewish Communities at the Institute of Oriental Studies of the Russian Academy of Sciences told Pravda.Ru.

Most likely, it was just a pre-election move. In about two weeks, Israel will hold parliamentary elections, and the leader of Likud party will gain extra votes with the help of this partisan-like visit to the States. In Israel, the position of those who believe that Obama is betraying Israel remains strong. This can also be seen in Israeli rhetoric. "I will do everything in my power to prevent the achievement of a nuclear agreement with Iran," said Netanyahu.

Netanyahu's speech before Congress will be "the speech of his life," an Israeli official in Washington told Al Jazeera. Speaking at a campaign rally, Netanyahu accused the United States and its allies of refusing from their obligations to prevent Iran from becoming a nuclear power.

Is there such a threat? Details of the agreement remain undisclosed. What we know about the agreement is that it was developed for 15 years and limits the degree of uranium enrichment to the level that allows to build a nuclear bomb. Iran also agrees to observe the Non-Proliferation Treaty (NPT) permanently, which allows peaceful use of nuclear power, prescribing member states (except the United States, Britain, France, Russia and China) to abstain from possessing nuclear weapons.

As a gesture of goodwill, Iran shut down some of its centrifuges and limited the capacity to enrich low-enriched uranium (LEU) at other centrifuges. Iran also agreed to send most of its LEU stockpile to Russia to process it for fuel for the only operating nuclear power plant at Bushehr. These measures will prevent Iran from accumulating enriched uranium that is required to build a nuclear bomb.

Yet, if Iran decides to pullout from the NPT, under which Iran has to report every gram of nuclear material to supervisory bodies, then the country will be able to build a nuclear bomb in a year, US experts say. Therefore, Netanyahu's fears are understandable, although it is unclear why no one is afraid of an Israeli atomic bomb.

Tel Aviv always has one objection. Unlike Iran, Israel is a democratically responsible state that will never use such weapons first. But, as the saying goes, "never say never."

In April 2013, a report from the Center of control over nuclear weapons assessed Israel's atomic arsenal from 75 to 200 warheads. Experts at the US-based Bulletin of the Atomic Scientists say that Israel stopped the production of nuclear weapons in 2004 (70 warheads), having retaining enough fissile radioactive material and technologies to create from 115 to 190 warheads additionally. Israel neither comments on the allegations nor signs the NPT, in contrast to Iran.

Iran will not seek to equalize forces with Israel. In this sense, no one says in the US what would happen if Iranian President Rouhani refused to sign the agreement.

"Such a possibility exists, - Semyon Bagdasarov, expert at Analytical Research Center, for Central Asia and the Middle East told Pravda.Ru. - Then negotiations will continue. The US is interested in improving relations with Iran. In particular, they would like to use oil and gas resources of the country in order to block, or at least reduce the supply of oil and gas to Europe from Russia. That is, they want to use Iran for anti-Russian objectives. Iran is a very rich country, where US mining companies are eager to work."

Dmitry Maryasis believe that Iran will not sign the agreement. "Iran will most likely not sign the document. Iran has not done that in many years. They will continue negotiating. The aggressive Ahmadinejad was replaced with the relatively moderate and calm Hassan Rouhani, who can communicate with Western leaders. Iran does not intend to refuse from its program."

It appears that Netanyahu's attempt to act as a partisan in the US behind Rouhani's back will only strengthen this desire. What can Russia gain from this conflict of interest being a member of the six-party talks with Iran?

On the one hand, Russia does not need the nuclear threat to spread, and on the other hand, it is not in Russia's interests to actively put pressure on Syria's ally, since nobody puts pressure on Israel and Saudi Arabia.

Russia offered to supply air defense complex Antey-2500 to Iran instead of S-300. If the deal takes place, Iran will receive a substantial defense system against any air strikes on its nuclear facilities. As they say, no comments from the peanut gallery.