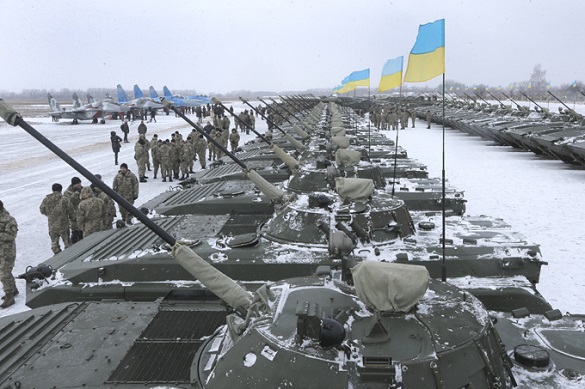 Angela Merkel and Francois Hollande are flying to Moscow after meeting Ukrainian President Petro Poroshenko in Kiev. In Moscow, the German Chancellor and the French President intend to discuss a new plan for the regulation of the Ukrainian conflict. The new plan is said to be a considerable addition to the Minsk Agreements. The plan supposedly suggests maintaining Ukraine's integrity providing greater autonomy to the Donbass. In the West, policy-makers strongly emphasize that this is the last chance to return to peace. According to them, President Putin will have nothing to do but to accept the new plan. Yet, the real state of affairs suggests otherwise.

Obama remains in an agony of doubt

"This is an unprecedented diplomatic format, when the leaders of the big two, two leading European countries, together fly to one capital and then to another," independent expert and political scientist Sergei Stankevich told Pravda.Ru. The expert noted that Hollande and Merkel flatly reject an opportunity to supply weapons to Kiev, while Washington took a break not to strain relationships with them. Yet, preparations for the transit of weapons are underway, warned Sergei Stankevich.

"Of course, this is an unprecedented event that shows quite clearly Europe's desire to achieve a decisive turn in the Ukrainian crisis. Today, there are two options: either the conflict escalates further or diplomats take a drastic turn, taking the conflict from the military to the diplomatic channel," he added.

US President Barack Obama reportedly remains in an agony of doubt, thinking whether to deliver weapons to Ukraine or not. The Congress has already approved of that when it passed the Ukraine Freedom Support Act. Obama needs to listen to US Secretary of State John Kerry, who had a meeting with Ukraine's Poroshenko on February 5 and then with his NATO colleagues. Obama will also listen to Merkel and Hollande, who will inform the US president of Putin's position. The trip to Kiev and Moscow is the last chance for a peace treaty, Christine Longin wrote on German website RP-online. "If we succeed, we will prevent escalation. If not, there will be a large-scale war," the author quoted French President Hollande as saying. Looks like a game of good cop and bad cop, doesn't it, dear reader?

Donbass is fighting against mercenaries from all over the world

Now let's take a look at the balance of forces prior to the meeting in Moscow. Ukraine, in the face of Poroshenko, takes a bellicose stance. The President of Ukraine has once again voiced the idea that the country will be a unitary state, and the official language of the country will be Ukrainian. Poroshenko said that he was ready to declare martial law.

Poroshenko can not but understand that he will see no money from the West in this case, as investing in countries that remain in a state of war is forbidden. Did he say that for domestic purposes? If so, it means that Poroshenko is in panic. The Western press writes that he insists on returning to the previous demarcation line. This is absolutely unrealistic after the offensive on the village of Debaltsevo. Poroshenko is a puppet, who has a good account in a Western bank and a warm house somewhere in America. Like Saakashvili, he will be well off, and it will be up to the Ukrainian people to deal with all the trouble that he causes.

The USA, Kiev's master, continues to operate in a stubborn and one-sided way. Kerry accuses only Russia and "separatists" of escalation, speaks of civil rights and democracy and calls to continue putting pressure of sanctions on Russia.

"These days are the time of trials for the strategic partnership between Ukraine and the United States," said Poroshenko. How many times can this partnership end with betrayal? It is not profitable for the USA to help Ukraine; the Americans do not need a strong Ukraine - they need a line of chaos around Russia.

Russia (note that Russia is not a party, but a mediator to the conflict) insists on direct talks that Kiev must conduct with Donetsk and Luhansk. Russia says that there is a civil war going on in Ukraine, and that the Kremlin's influence on the militia is limited. The West does not see Russia as a full-fledged partner. The West is confident that the Russian economy is "in tatters" and will be ready to collapse in the next three years, if sanctions remain in effect.

Western policy-makers believe that Russian citizens will rebel against Putin as their living standard declines. This, according to all Western analysts, is the aspect that will force the Russian president to agree to the "final" offer from Merkel and Hollande.

One needs to treat these horror stories calmly. In the end, Russia will be paying its debts accurately. The BRICS Development Bank is to start working soon. As Stratfor founder George Friedman said, "Russians' strength is that they can endure things that would break other nations."

Europe is sinking deeper into the conflict against its own will. Then there is Greece with its reparations to Germany and the destabilization of the euro zone. Europe is far from being united. There are European "hawks" (Poland, the Baltic countries), and there are "doves" (Italy, Austria, Greece) when it comes to relations with Russia. Merkel and Hollande understand that Ukraine will ask for a lot of money, should France and Germany provide unconditional support to Poroshenko and the Kiev government.  Merkel is not ready to print euros even for Greece, let alone Ukraine.

Putin needs to ask Merkel and Hollande two questions. The first question is: who will restore the economy of Ukraine? Are they willing to give Ukraine $15 billion this year, as Yatsenyuk requests? The second question: are they ready to wage war against Russia? Russia is ready. Mentally, Russia is always ready - it is in her genes to repel Western aggression. Russia won two wars against Germany and France. Merkel and Hollande need to understand this. We must speak with them from the position of strength. The West respects only the strong - this is a postulate.

In addition, one would need to strongly emphasize that we can agree on a lot of things, but negotiations between Kiev, Donetsk to Luhansk republics are much more important. If there is no agreement between Kiev, Donetsk and Luhansk, there is no peace. Moscow agreed with Ramzan Kadyrov of Chechnya, and the Chechen Republic cast aside its desire to be the Republic of Ichkeria. We must make it clear that powers can help with weapon, but it is up to people, not weapons,  to solve conflicts.

The success of the militia already shows that the Russians are stronger - this is obvious for every Christian. Merkel frequently emphasizes her Christian beliefs. People in the Donbass fight for their land, which they do not considered Ukrainian. President Putin ought to conduct a philosophical conversation with his counterparts too. Hollande must understand him, as France has always been a mediator between Russia and the Anglo-Saxons. We can't say the same about Angela Merkel, as she has replaced "USA's best poodle" in postwar years - Great Britain.

Hollande and Merkel's visit to Moscow: Europe is tired of Ukraine

Sergei Stankevich sees a way out in creating a group of international mediators on the formula 4+2: France, Germany, Russia, Kazakhstan, plus two members of the Ukrainian conflict, to discuss Donbass as a territory of Ukraine having broad autonomy.

"Surprises can be only in Kiev, because Poroshenko has a very limited range of possible actions. His power is weak. Chances for success are greater than ever now. A military solution is hopeless and it has become completely obvious now. Now it's time to give way to diplomacy," Sergei Stankevich told Pravda.Ru.

"Everything will depend on what Merkel and Hollande bring to Moscow from Kiev, - political analyst Igor Shatrov told Pravda.Ru. - If Poroshenko shows commitment to negotiations, and if they manage to cease fire and withdraw heavy artillery, Putin will make some steps in return as well. If these talks turn out to be nothing but words, if Poroshenko continues to announce his accusations, these negotiations will bring no result."