On 10th January the Brussels Tribunal circulated, internationally, an urgent Appeal (1) for the release of the prominent Iraqi journalist and human rights campaigner Mr Uday Al-Zaidy who had been disappeared by Iraqi militia the previous evening. 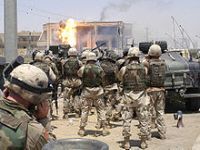 "I don't see anything wrong with Tony Blair giving his opinions on Iraq, it's just that he should be doing it at The Hague." (Comedian, political commentator, Frankie Boyle, 16th January 2015.)

On 10th January the Brussels Tribunal circulated, internationally, an urgent Appeal (1) for the release of the prominent Iraqi journalist and human rights campaigner Mr Uday Al-Zaidy who had been disappeared by Iraqi militia the previous evening.

A further article (2) outlined the extreme danger he faced, the torture to which he was being subjected and the ongoing abandonment of all international legal norms in Iraq. Lest it be forgotten, the entire legal, civil and armed services structure was abolished and re-designed under the authority of US "Viceroy" Paul Bremer. It is of course, illegal to change a Constitution under an occupation.

Sabah Al-Mukhtar, President of the Arab Lawyers Association had feared the worst for Al-Zaidy, stating: "This is a very serious matter - they will slaughter him."

It was subsequently learned that the Brussells Tribunal Appeal and resultant international pressure, including by the UN, bore results - his release. The cost to him has been inestimable. His case though - updated in depth below - highlights the unimaginable nightmare of all that should represent legality and justice in the now lawless, militia dominated US created "New Iraq."

A darkest irony is that the constant US-UK mantra when referring to Iraq under Saddam Hussein was that he "kills his own people", imprisons, tortures, disappears, executes. It is now incontrovertible that Saddam Hussein's government paled against the American instigated regime.

In 2007, four years in to US-UK occupation, "liberation" and "freedom", according to a US State Department Human Rights Report:

"The number of Ministry of the Interior facilities at the end of 2007 was unknown but, including police station holding facilities, official Ministry of the Interior detention locations were estimated to number over 1,000 facilities. Additionally, there were reports of unofficial detention centres throughout the country." (3) Under an occupation of course, the occupiers are responsible for the safety, well-being and human rights of the occupied.

Indications are that over seven years later these hidden gulags and other hadean facilities have increased rather than decreased.

The reference to the unknown number of Interior Ministry facilities is of paramount concern. In November 2005 US troops found: " ... more than 170 prisoners ... locked in an Interior Ministry bunker in Baghdad, many of them beaten and malnourished and some apparently brutally tortured ... one or two detainees were paralysed and some had their skin peeled off ... sources in Baghdad said there were rumours that mutilated corpses and torture instruments had also been found at the underground bunker, including bodies with electric drill holes in their heads."(4)

The Interior Minister at the time was Baqir Jabr Al-Zubeidi also known as Bayan Jabr Solagh. Under Jabr's control, in 2006 the Ministry: "was accused by the United Nations human rights chief in Iraq, John Pace, of executing and torturing to death hundreds of Iraqis every month." (5)

The Ministerial deckchairs might have been now moved on the Iraqi Titanic but there are no indications that the cataclysmic human carnage is in any way diminishing.

Iraq's official, as opposed to unofficial justice regime is little better. According to the Human Rights Watch "No One is Safe" Report, it is:  "a judicial system plagued by torture and rampant corruption. Last April, United Nations High Commissioner for Human Rights Navi Pillay issued a scathing indictment of Iraq's 'not functioning' justice system, citing numerous convictions based on confessions obtained under torture and ill-treatment, a weak judiciary, and trial proceedings that fall far short of international standards."

In a case mirroring that of Uday Al-Zaidy, though relating to a woman, HRW cites her "bundled in to a car" driven "to the office of a state institution" then beaten, shocked with electric cables and drenched in icy water "in an effort to force" a confession. (6)

Amnesty International states starkly: "The human rights situation in Iraq remains dire", citing that apart from IS and other armed groups

: " ... a systemic pattern of abuse at the hands of the Iraqi central government."

Moreover: "A consistent pattern of human rights violations by the Iraqi government has widely been seen as a significant factor in the widespread popular discontent. Thousands of detainees languish in prison without charge. Detainees are routinely held 'incommunicado', without access to family or legal counsel. Torture and ill-treatment occurs regularly and with impunity in prisons and detention centers."

Chillingly: "Iraq is the world's third most prolific executioner, with hundreds of prisoners on death row and at least 169 executions in 2013. The surge in executions has continued in 2014."(7)

Further, on July 11th 2014 HRW stated: "Iraqi security forces and militias affiliated with the government appear to have unlawfully executed at least 255 prisoners in six Iraqi cities and villages since June 9, 2014." At least eight of the dead were boys under eighteen. It seems that the "prisoners" were in fact rounded up by Iraqi militia whilst fleeing from an assault by the crucifying, beheading crazies of the self styled Islamic State.

" The mass extrajudicial killings may be evidence of war crimes or crimes against humanity ...  Gunning down prisoners is an outrageous violation of international law ..." (8)

Journalists, as Uday Al-Zaidy are one of the groups especially vulnerable as the Brussells Tribunal's meticulous monitoring shows. (9) Four hundred and six media professionals have been killed since the 2003 invasion, including fourteen in 2014. Journalists have been subjected to: " ... assassination attempts, detaining, beating and raids on their headquarters and houses to prevent them from reporting."

The price he paid for his work and outspoken passion for the healing of an Iraq riven by the divide and rule regime devised with meticulous deliberation by the invaders has, as with so many, been hard to imagine.

It is now learned that the charges against him included "terrorism." This, as was aptly put is widely used against protesters and those who criticize the fact that Iraq's government and policies are widely run by those who returned from years in Iran, or by Iranians. National sovereignty is dear to most.

It is learned from an impeccable source that Uday Al-Zaidy was arrested at a false checkpoint on the road from Al Shatra, twenty miles north of Al Nassiriya, in southern Iraq, returning from the funeral of a relative. He was taken in a four car convoy to Al Shatra "Counter Terrorism Unit" which is seemingly under Iranian command.

He was: " Tortured and beaten from the minute they got him into their cars - electrocuted in sensitive areas (genitals) kept without food or water."  He was kept naked throughout his detention. Urine was poured over him, in the freezing winter he was left without heat.

As recounted above, he too was also subject to freezing water poured over him. Lessons from the US in Abu Ghraib and elsewhere in Iraq have clearly shaped the unspeakable in Iraq's overt and covert detentions centres.

Although it would seem the Iraqis arrested him under Iranian orders, when the Iranians questioned him, they treated him with courtesy.

Finally, though seemingly under pressure, the Judge had to rule that there was no evidence against him.

Uday Al-Zaidy was determined to be part of those committed to restoring Iraq to the secular nation it was, pre-invasion, with, pre-embargo, an awe from the rest of the region for it's lack of corruption. He would not leave in spite of paying a high price.

Finally he has left. He is receiving medical treatment, abroad, scarred from torture, his arm in a sling. Further details are unclear.

He wanted to rebuild an Iraq with now: "No work, no schools no future."

Now his own future in uncertain, alone, unwell, in a foreign country where Iraq's currency is worth little.

Importantly though, is that Uday Al-Zaidy represents the visible for the countless thousands of invisible, tormented, tortured, murdered, uncounted, unfound in Iraq's also uncounted gulags.

In context, for those who have a relative who can help I learn that: "The Administrator of Al Adalah Prison in Kadmia in Baghdad ( mainly for political prisoners) collects daily taxes from the prisoners to improve the unbearable living conditions in the prison." For "taxes" I translate "bribes."

Incidentally, ironically Al Shatra, during the 2003 invasion of Iraq, became infamous for dragging the body of a US Marine through the streets and hanging his body in the town square after incoming American troops tore down pictures of Saddam Hussein across the region.

If only the invaders had listened and realized that there were going to be no "sweets and flowers" just unimaginable tragedy for them and far worse for Iraq and retreated, Iraq, the "Cradle of Civilization" would not be in ruins, and about one and a half million lives saved.