In a recent interview for NPR at the Oval Office, Mr. Barrack Obama defined Russian President Vladimir Putin's strategy as "not so smart": 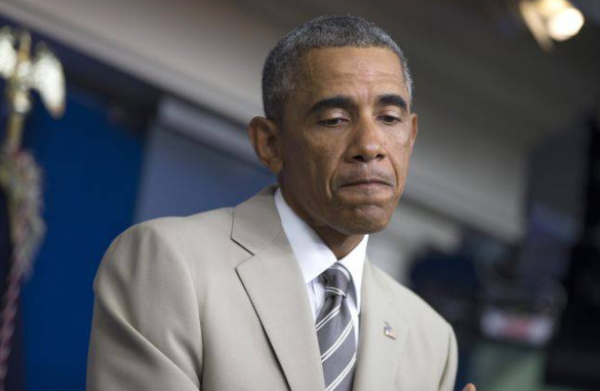 "You'll recall that three or four months ago, everybody in Washington was convinced that President Putin was a genius and he had outmanoeuvred all of us and he had bullied and strategised his way into expanding Russian power," he said. "Today, I'd sense that at least outside of Russia, maybe some people are thinking what Putin did wasn't so smart."

Obama also added that those thinking his Russian counterpart was a "genius" had been proven wrong by Russia's economic crisis. [1]

Statements that sound tragic and comic at the same time if we think about Obama's "achievements", on a national and international level, which brought him to be considered by many Americans one of the worst presidents in the history of the United States. Obama even managed to be criticized by Jimmy Carter (clearly not an interventionist) for his inaction against Isis.

Trouble within the borders

On a national scale, the Obama administration engulfed in several compromising issues such as the IRS persecution of conservative groups, the Justice Department seizure of journalists' phone records, the NSA spy scandal that even went far beyond the US borders, putting at stake the alliance with key-European countries such as Germany and France.

In addition, his health care reform (the so called "Obamacare") will end up expanding America's debt, increasing the cost of health services for both, US citizens and businesses and creating more unemployment. A report released in September 2014 by the American Health Policy explains how Obamacare negatively impacts employment in two ways, by reducing the number of people in the labor market as well as the number of jobs available. This double-impact was named the "health-care employment squeeze".

In February 2014, the Congressional Budget Office released another report concluding that by 2024, approximately 2.5 million full-time workers would end up unemployed due to Obamacare. According to such document, the law creates strong incentives for millions of people to just stop working, even though the Obama administration tried to spin this outcome as a good thing since it would allow people to "pursue their dreams."

Another issue that has raised major concerns among Americans is the announced amnesty for approximately 5 million illegal immigrants, contradicting previous statements where Obama "claimed that he couldn't, and wouldn't take executive action on immigration"[2]. A move that, according to some, looks more like an attempt to gain votes among the Hispanic community.

As written in an article by former defense attorney Gregg Jarrett: "If Obama ever finds himself in a court of law, he would surely be advised to invoke the Fifth Amendment. He is prone to contradiction and tends to be a good witness against himself".

According to Jarrett, Obama's immigration plan is illegal for several reasons: first of all because it distorts prosecutorial discretion, stretching it beyond all recognition and reason, empowering himself to decide what laws may be enforced or ignored and what persons may come or go across the southern border irrespective of what the law actually states.

Secondly, because it does not safeguard the clearly delineated separation of powers between Congress (vested with writing the laws) and the President (who executes such laws). As Jarrett explains: "In so doing, he is granting himself extra-constitutional authority and upsetting the carefully balanced separation of powers. He is also subverting the nucleus of our constitutional design: the rule of law".

Thirdly, in 1996, Congress passed a law which requires federal immigration agents to deport illegal immigrants, with very few exceptions. In addition, any prosecutorial discretion which may have existed before was specifically eliminated by that legislative act.  Article II, Section 3 of the Constitution states that the President "shall take Care that the Laws be faithfully executed. Unfortunately Obama's immigration plan seems to ignore all this. [3]

John Bohener, Speaker of the House of Representatives and member of the Republican Party, recently explained how the Obama immigration plan will not only encourage more people to enter illegally, putting their lives at risk, but it will also increase the humanitarian crisis on the border with Mexico, which is already in disastrous conditions.

In addition Bohener also reminded that the immigration system should be regulated through a democratic process which implies passing bills through the House and the Senate first and the to the President's desk and not through unilateral actions. [4]

Another eminent danger is linked to the "narcos hegemony" in Mexico, near the US border.  The drug cartels will obviously exploit the new immigration plan, which will help them create cover for their traffic through the already porous border.

Obama's ambiguity on terrorism and Middle East-related policies are also of primary concern. He initially tried to show how serious he was about fighting Islamic extremism, by ordering some drone strikes and organizing a raid that presumably killed Usama Bin Laden, but without any evidence; the body of al-Qaeda's former leader was apparently thrown into the sea in order to "respect Islamic customs". Since when do Islamic funeral rituals require bodies to be buried at sea?

In September 2014 a scandal that somehow remained quite under silence on an international level broke out in relation to the presence of Mohamed Elbiary, a Muslim Brotherhood fan and Islamist supporter, inside the U.S. Homeland Security Department (a body that has the objective of protecting the United States against terrorism).

Elibiary has a history of controversial posts and statements. During the Egyptian political crisis in the summer of 2013 he posted the "R4BIA" four-finger salute symbol associated with the Egyptian Muslim Brotherhood on his Twitter profile. The Muslim Brotherhood was banned in Russia and listed as terror-organization by the Russian Supreme Court in 2003 due to its support for Islamic extremists in the Caucasus and it is today banned in several Middle Eastern countries such as Egypt, Saudi Arabia and the United Arab Emirates as it is considered a terror group.

Elibiary has also used Twitter to praise late Muslim Brotherhood ideologue Sayyid Qutb, whose ideas had served as the basis for the modern Jihadist movement, and especially his call for violent Jihad and for the purification of Islam from the non-believers. Elibiary further enraged the Coptic community for suggesting that Copts who protested against anti-Christian violence in Egypt promoted "Islamophobic" bigotry.

But that is not all, in fact Elbiary had to resign in September 2014 due to a tweet where he claimed that "the return of the Caliphate was inevitable", in reference to the Isis advance in Iraq.

How did Elbiary become senior adviser for a department with such a sensitive task? Weren't the Obama administration and the US intelligence aware of it?

This is an interesting point because it could eventually explain the Obama administration's positions on Egypt, where former Muslim Brotherhood-linked Mohamed Morsy and his Islamist government were supported until the last minute in the summer of 2013 , against the Egyptian people's will and against their demand for new elections. Isn't it strange that the United States, always promoting "democracy" around the world, in that case turned against the will of the people? Causing rage among the Egyptians who initiated protests even against CNN, accusing the media company of not showing facts as they were and forcing the former US ambassador Anne Patterson to leave Egypt after being accused of complying with the Muslim Brotherhood.

Another interesting issue is linked to Libya and the Obama administration's inaction against jihadists who attacked the US consulate in Benghazi on September 11th 2012 and killed former US ambassador to Libya, Chris Stevens. A very serious event that would have required immediate and strong action.

At the time, Obama Administration officials speculated that the attack was a "spontaneous response" to an online preview of a movie considered offensive to Muslims, almost making it seem to some as a normal and understandable reaction. Several former-Libyan officials did not agree on that, claiming that the attack was perpetrated by Islamist groups linked to Ansar al-Sharia and al-Qaeda in the Islamic Maghreb. It later became obvious, due to logistical and operational elements, that the attack had been well-planned through the use of proper intelligence and carried out with sophisticated military weapons such as RPGs. Witnesses of the attack clearly stated that there was no spontaneous demonstration as the attackers came well-organized, with trucks, automatic weapons and rockets.

Immediately after the Malaysian airlines flight tragedy that occurred on July 17th 2014 over the skies of Ukraine, Barrack  Obama said that a missile fired from rebel-held territory in eastern Ukraine had brought down Malaysia Airlines MH17:

"Evidence indicates that the plane was shot down by a surface-to-air missile from an area controlled by Russian-backed separatists inside of Ukraine," Obama said, noting that it was not the first time in recent months that the pro-Russia rebels had taken down airplanes. [5]

Yet today the Obama administration hasn't provided any type of evidence to back such claims while, on the other hand, in a press conference held in Moscow on July 21 2014, the Russian Defense Ministry presented detailed radar and satellite data on the movement of forces loyal to the Ukrainian regime in Kiev immediately before the crash. This data raised questions about the possible involvement of the Kiev regime and its Western backers in the crash. In addition, rumors about the possibility that the Ukrainian Security Service (SBU)  handed over recordings of conversations between air traffic control and the Malaysia Airlines plane to US analysts in Kiev, emerged at the end of July. [6] [7]

Last week Russian investigators claimed to have new proofs that would show how the Malaysian plane was shot down by a Ukrainian air force pilot. According to a report by Komsomolskaya Pravda, a man whose name was kept secret (an employee at Aviatorske Airport, a Ukrainian military airfield in the city of Dnipropetrovsk), said he knows the pilot who pulled the trigger and even named him as Captain Vladislav Voloshin of Nikolaev, Ukraine. According to the witness, Voloshin appeared frightened when he got out of his plane and said "wrong plane". [8] [9]

More details will be available soon and in the meantime the public opinion is still waiting for Obama's "evidence".

There would be so much more to mention in relation to Obama's "achievements", such as the failing policies in Syria, the prolonged inaction on Isis, the ethnic clashes in Missouri, the White House security fiasco, but it would require more space and exceed the length of a newspaper article, although these are all good premises for a potential bestseller.