Al-Qaeda is not Islam, Islam is not Islamic State, but Al-Qaeda took one step closer to Islamic State on December 16, 2014 when operatives in Pakistan murdered over 130 children in the most blatant act of cowardice the world has witnessed since Beslan, when Chechen terrorists attacked a Russian school. 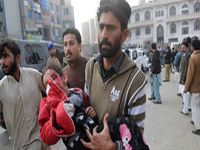 Christmas, 2014. It appears the world has gone mad. An Iranian nutcase who allegedly burnt his wife, committed 40-odd acts of sexual depravity and jeered at Australians mourning the deaths of their sons is allowed to have a license to carry a firearm, then wrecks the Christmases and lives of two families; then the day after a bunch of demented cowards attack a school in Peshawar, Pakistan, murdering 132 children and nine staff members. What is worse, is why.

And why? Because they wanted the Pakistani Armed Forces to get a taste of their own medicine and to feel what they feel when they are attacked and lose fighters? That's what they say but the real, strategic reason is because they are losing volunteers to Islamic State, which is far more popular among the disaffected, disgruntled sociopaths and psychopaths who run along to join up.

Therefore they perpetrate the same sort of cowardly massacre of civilians, as opposed to choosing military targets, like Islamic State, hoping to regain the initiative in captivating the imagination of volunteers, to then be sent to their deaths as suicide bombers or cannon fodder, as the cowardly masterminds of the attacks hide behind those they use - often people who are mentally retarded, such as Downs Syndrome, and even children.

"Hey, you want to go to Paradise? OK then put this jacket on, now go into that café over there, shout Allahu Akhbar and press the button".

BANG! 30 lives, plus the one of the brainwashed perpetrator, ruined, lost, 30 families plus one destroyed. And for what?

For Islam, this is bad news. Those of us who have bothered to sit down with the Qu'ran and read it from cover to cover (It is easily available online or from Embassies of the Kingdom of Saudi Arabia) have not found a message of hatred and repression and violence, but rather one of understanding, peace, cohabitation and respect - respect for other humans, respect for animals, even respect for plants. It reads as a mix half-way between Christianity and Buddhism. The Qu´ran is not a violent book, it is as good a code of ethics as any other religious text, and Islam is not a religion of violence, period.

But most people do not instruct themselves, they make the minimum effort to be informed and allow themselves to be led by opinion leaders who jump to conclusions or else further their own interests. Watch this space. One more massacre, one more act of cowardice by some demented person or persons with mental issues, and right-wing xenophobic, racist groups of bigots will appear like mushrooms across the Western world, if indeed they are not already, adding to the already worrying political movements based on nationalism and intolerance.

The extremists in our midst are very few but sufficient to spoil the party for everyone. A spectacular success like 9/11 (from the terrorist point of view, which is to sow panic and fear) is very difficult to carry out, whereas an attack against a soft target such as a school, cinema or shopping center, is easier than playing a game of table tennis. All you need is a grenade or two, an automatic weapon, some clips of ammunition, possibly an accomplice, or not... and it seems there are plenty of volunteers. People with no lives or prospects of careers in the western world's wonderful economic model with its endemic unemployment or pseudo-employment, with its banks refusing to lend money in meaningful quantities or at meaningful rates, with the virtual impossibility to buy a house, get and keep a job and bring up a family. These volunteers are easily brainwashed by Internet campaigns to offer themselves as Jihadis or the wives of Jihadis.

Radicalized, they will return, as welcome as a cancer, which they have become.

But December 16 was a game changer, the day Al-Qaeda lost its battle, the day when Islamist fundamentalism died, blackening the hearts and souls of the collective conscience of humankind. It was the day Al-Qaeda associated itself with cowardice and the most vile, hateful and forbidden act anyone could commit: crimes against children.

Islamic State, Al-Qaeda and Islamist fundamentalism have no place inside Islam, and have no place in our world today. This wonderful and beautiful home which Mother Nature gave us was supposed to be for us all to live together in peace, alongside our brothers and sisters, the other animals we are supposed to share it with. And so it shall be, without those who perpetrate such outrages.