Half of Ukraine support joining NATO?

Ukraine. Against the backdrop of the horror of the civil war in the east and the growing threat of catastrophe throughout the country, the Ukrainian authorities are looking for reasons for optimism. For example, the Director of the Democratic Initiatives Foundation, Irina Bekeshkina, said at a press conference that being aware of external threats to the country, the Ukrainians become increasingly supportive of Ukraine's NATO membership. 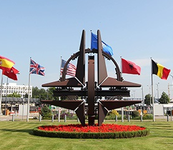 Thus, according to Bekeshkina, as many as 34 percent of Ukrainians compared with 12 percent in August 2012 support joining NATO. The support will grow every month. ''If at least a half of the population of Ukraine support the idea to join NATO, it will be a considerable argument for the leadership of the Alliance. Just like the Ukrainians proved on Independence Square in Kiev that Ukraine is Europe'' the sociologist said.

If we believe the Ukrainian sociologist, it would mean that in two years, the idea to be a NATO member would find support with 102 percent of the Ukrainians. And yet, for an experienced sociologist (the director of the foundation is apparently one of them), a form of presentation of the research raises many questions.

Responses to the question: "Would you vote for Ukraine's membership at NATO, if the referendum were held next Sunday?" were as follows: "Against NATO" - 48 percent, "for NATO" - 15, undecided or would not participate in the referendum - 36. The statistical sampling error does not exceed 2.2 percent.

These are the results of the nationwide poll conducted by the Democratic Initiatives Foundation and the Kiev International Institute of Sociology in February 2005, i.e. soon after the victory of the Orange Revolution.

It is easy to see how big the difference in presenting the information is: a few days ago and nearly a decade ago. One figure says little; it is important to know the "weight" of the opposite point of view and the amount of undecided individuals, especially in the Ukrainian electoral context. Any surveys conducted in good faith on key topics (UPA, NATO, EU Customs Union, etc.), by "macro-regions," each time confirm the validity of the conclusion made by of Harvard Professor Samuel Huntington, who described Ukraine as a "torn country."

According to the author of "The Clash of Civilizations," Ukraine is not a sustainable public formation, as it is located at the junction of two civilizations - the Western and the Russian ones. The border of the civilization section runs right through the territory of modern Ukraine. The exclusion of the Crimea from the scheme does not affect the harmony of Huntington's theory.

In Ukraine, there is no single core that would gather periphery around it. There is the southeast of the country on one side and the center + the west on the other side. Each of these two macro-regions have their own core (Donbass and Galicia). Anyone can see it with their own eyes by visiting the website of the Ukrainian Central Election Commission. In contrast to the more amorphous central part, these two regions demonstrate the highest turnout at all elections (on the level of 80-90 percent). Moreover, they opt for one of the candidates/political forces (at a comparable level).

Incidentally, Bekeshkina's assertion "the Ukrainians on Independence Square proved that Ukraine is Europe" is also a slight exaggeration. Of course,  Euromaidan leaders insisted that they represented the "voice of the people." However, less than a half of the citizens of Ukraine - 49 percent - supported the action. About 45 percent of Ukrainians were negative in their attitude about Euromaidan.

This can be seen as a result of a nationwide public opinion poll conducted by the sociological company "R&B Group" on December 4-9 2013, i.e. during the period of relatively "peaceful" protests.

Again, it is the regional breakdown that is important. For example, in Ukraine in general, 36 percent supported the country's accession to the Customs Union. At the same time, Ukraine's integration into the Customs Union found support with 61 percent of residents of the east of Ukraine and 54 - of the south.

But back to the statement of Irina Bekeshkina. The director of the Democratic Initiatives Fund is not an impartial person, nor does she hide any sympathies. She hopes that "at least a half of the population of Ukraine will be for NATO." Is there an electoral potential for that? First, the undecided. If, for example, we take the numbers starting from 2005 (48 - against. 15 - for, 36 - undecided), then adding 15 and 36 can easily reach the desired goal. This does not happen in life. The Ukrainian experience shows that undecided individuals opt proportionally to the quantities of electorates (i.e. the bigger part opts for the larger core, the smaller part - to the smaller one).

We will not, however, forget about the "phenomenon of Poroshenko." On the one hand, his victory in the first round with a score of 55 percent is absolutely unbelievable. On the other hand, the degree of improbability reduces, if one recollects the fact that the Crimea did not take part in the vote (more than 1 million voters). The Donbass region of Ukraine did not go to the polls either (over 3 million eligible voters).

If peace in Ukraine depends on the repression and destruction of those who disagree with the point of view of Lviv and Kiev (in fact, it goes about ethnocide and a way free of deportation), then achieving the level of 50 percent in support of NATO is quite possible.