Obama takes Russia and USA to another Cold War - Medvedev 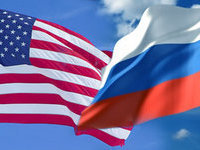 The U.S. policy towards Russia, including the imposition of sanctions, means that the relations between the two countries are moving to a new "cold war," said Russian Prime Minister Dmitry Medvedev in an interview with Bloomberg TV.

According to him, this is the fault of the U.S. government and, especially, the administration of President Barack Obama. "I believe that President Obama could show more political tact ... A number of decisions that have been taken by the U.S. administration disappoint me," said Medvedev. According to him, the leaders of the U.S. and Russia "have done a lot for the Russian-American relations." However, the results that have been obtained, "are practically multiplied by zero," Medvedev said.

According to Medvedev, the sanctions against Russia will be forgotten as soon as Democrat Barack Obama is replaced with another president.

Medvedev said that "even during most difficult periods in the relations between the U.S. and the Soviet Union, during the Cuban missile crisis, during the time when the USSR was deciding to send troops to Afghanistan, there were no sanctions imposed against parliamentarians, and high political contacts were preserved." In his view, the sanctions from the Americans and Europeans "destroy the tissue of international relations."

Despite the fact that Russia is opposed to any sanctions, it has a set of measures that can be taken against adequate states, Medvedev said. The effects of the measures taken against the Russian Federation may be "painful," but "such a country like Russia can stand absolutely any sanctions."

The EU has repeatedly imposed sanctions against the Russian Federation in connection with the situation around Ukraine. At the moment, Europe is on the so-called second stage of sanctions - individual restrictive measures against certain individuals and companies that are responsible, in the opinion of the EU, for the destabilization of the situation in Ukraine. The West also considers the introduction of economic sanctions against Russia that may affect whole sectors of economy, and possibly energy, - one of the largest areas of cooperation owing to exports of natural gas from Russia. For the time being, a decision to proceed to sectoral sanctions against Russia has not been made. The EU and the United States can make a step in this direction should the Ukrainian presidential election, scheduled for May 25, is disrupted.

Meanwhile, Medvedev doubts that the situation in Ukraine will make it possible to hold the presidential election properly, so that Russia recognizes their legitimacy. The Prime Minister pointed out that "these elections are the result of unconstitutional change of power." However, he acknowledged that the elections will be "a certain solution of the situation that has developed at the moment."

Meanwhile, the Ukrainian military continue the punitive operation against civilians in eastern regions of the country, where the supporters of federalization had previously held referenda and declared independence.

Ukrainian mass media say that the Russian authorities are going to use the Crimean scenario "to annex south-eastern regions of Ukraine to the territory of the Russian Federation. Premier Medvedev, however, said that such insinuations were nothing more than propaganda, and refused to comment on them. According to the PM, "the most important thing to do now is to stop the spread of civil war on the territory of Ukraine." The best guarantee of the integrity of Ukraine could become Kiev's direct dialogue with all regions.

Medvedev urged to respect the position of people in Lugansk, Donetsk and other parts of Ukraine. "If they hold referenda, we need to understand what they want," said the prime minister.