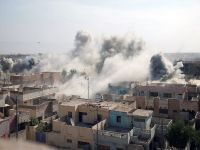 In Iraq there is an ongoing massacre. Below are the figures of the dead and wounded brought daily, to just one hospital in the country's largest governorate, Anbar Province, the Emergency Department of the Fallujah General Hospital, between 28th February 2014 and 7th May 2014.

They are the victims of the US imposed Prime Minister Nuri al-Maliki's militias.

The UN representative in Iraq is near silent, the varying Ambassadors in Iraq are silent, including those of the US and UK, whose actions and lies about fictional "weapons of mass destruction" are responsible for the ongoing, daily carnage. Eleven relentless years of death and heartbreak.

Normal services such as clean water, constant electricity are non-existent (imagine the nightmare of working with interruptions in a hospital of the machinery needed to keep patients alive, resuscitated, monitored, anesthetized.) Thus, given the power interruptions and tense situation, the full numbers are incomplete. But these provide a small sample of one city's unending tragedy in a Province under siege, under a US imposed leader using US supplied weapons.

This comes with inestimable thanks to the meticulous collating of Dr Muhamad Al-Darraji.

Wednesday 7th May: Government troops targeted the Doctors' Residence at the hospital at 1 a.m., causing extensive damage, hit "by two projectiles." It is the twelfth time the hospital has been bombed and the third time that the Doctors' quarters have been hit.

There were also explosions reported in the blood donation department of the hospital after a call for people to donate urgently. Reports on casualties are still awaited.

Hospitals are afforded special protection under the 1949 Geneva Convention as are all staff, not alone medical, but drivers, clerical, cleaners, cooks, maintenance. Attacking one is a war crime. But the troops have learned well from the Americans who of course boasted of training them and who on Sunday 7th November 2004: "...  stormed the Falluja General Hospital.

"They rounded up all the doctors, pushed them face down on the floor and handcuffed them with plastic straps behind their backs. With the hospital occupied, those wounded by the U.S. aerial bombings headed to the Fallujah Central Health Clinic. And so at 5:30 a.m. on Tuesday, November 9th, U.S. warplanes bombed that clinic as well, killing thirty five patients, fifteen medics, four nurses, five support staff and four doctors according to a doctor who survived. U.S. fire also targeted an ambulance, killing five patients and the driver."(1)

Sunday 4th May: Five wounded including one woman and two children. Fifteen dead, including five children.

Saturday 3rd May: Seven wounded, including one woman and two children. Two dead.

Thursday 1st May - the eleventh anniversary of George W. Bush's "Mission Accomplished" speech on the USS Abraham Lincoln: Seven wounded including one woman and one young girl.

30th April, Iraq election day, from which the Province was excluded from voting due to the government attacking it, such is democracy in the "New Iraq": Ten wounded including a woman and another girl.

Monday 21st April: By Mid-day: Five wounded, including one child and one woman. Six dead.

Friday 18th April: By Mid-day: Four wounded including one child. One dead.

Thursday 17th April: By Mid-day: Seven wounded, including one child. One dead.

A Danish journalist asked a Fallujan what he thought about what was happening. The reply was: "What would you feel if the Danish army shelled your city?" The journalist's eyes flooded with tears.

1,666 people died in Iraq the first three months of 2014 due acts of violence, according to UN statistics. Deaths in Anbar Province are now being excluded from Iraq government statistics, it is understood. However, according to the meticulous Dr Al-Darraji to 6th May of the figures he has obtained, which exclude the dates and hours recorded above: "The total civilian casualties of Fallujah people since the beginning of war against Anbar Province so far, are 1,296 wounded and 295 killed." The all added to day after blood soaked day, in the name of US-UK style "Freedom, Democracy and Liberation."