The United Nations Organization has called on all parties to avoid escalation of tensions through propaganda, fear-mongering and incitement to hatred, expressing alarm at the highly volatile scenario in Eastern Ukraine and urges the self-appointed "Government" to respect diversity, inclusivity and equal participation for all, including minorities. 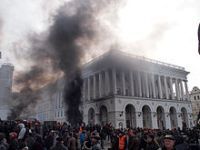 A report from the UN High Commission for Human Rights issued a report on the situation in Ukraine, published on Tuesday, urging all sides to refrain from publishing misinformation: UN High Commissioner for Human Rights Navi Pillay stated: "Facts on the ground need to be established to help reduce the risk of radically different narratives being exploited for political ends. People need a reliable point of view to counter what has been widespread misinformation and also speech that aims to incite hatred on national, religious or racial grounds."

Maybe we could all start by stating the facts, from the beginning, instead of blaming Russia for everything. The Western version goes like this: Russia annexed the Crimea and is now annexing the Eastern Ukraine. Unfortunately, this is a classic example of the mistruths, or barefaced lies, that the UNO is complaining about, but then again the history of lack of respect for the UNO from the West is rich.

For a start, the entire crisis was caused when a Putsch was staged in Kiev, overthrowing the legitimately elected Government of President Yanukovich, without using any of the legal norms in course for deposing a President because they did not exist. This Junta, supported by or even including Fascists, racists, terrorists and criminals, was quick to enact anti-Russian edicts while in the streets of Kiev there were calls of death to Russians and Jews.

Obviously, in areas where most of the population is ethnically Russian and Russian-speaking, the reaction was one of nervousness. This does not mean the Russian Federation was sending agents into Ukraine, it does not need to. Neither did it need to annex Crimea, because it didn't - the Crimeans voted en masse to rejoin Russia and come back home.

Presidential candidates from Eastern Ukraine have been violently attacked in Kiev and murder attempts were recently made against two of them. The Ukrainian Junta in Kiev continues to be supported by Fascists and has hired foreign mercenaries to murder fellow Ukrainians.

These are the facts. Anything contrary is hateful propaganda spread by western media outlets, as the West, predictably, takes sides with the Fascists, murderers and torturers in or near the Fascist Junta in Kiev. Not a word of the fact that the same snipers who were firing on the Ukrainian police were also firing on the crowds, from the eighth and ninth floors of the Ukraina Hotel which was occupied by Opposition Forces during the troubles in Maidan Square in February.

What to expect from a west that invaded Iraq outside the auspices of the UNO, which slaughtered civilians without a second thought, which targeted civilian structures with military hardware, which then turned on Libya, supporting terrorists, which has been arming terrorists in Syria, terrorists who have been slicing the breasts off women in the streets and using chemical weapons to try and incriminate the Government forces of President Assad? What to expect from a west which runs or turns a blind eye to the torture and concentration camps run by the United States of America?

The good news is that the people of the Ukraine themselves are coming together as I write, according to eye-witness accounts, with the Russian-speaking population of the East receiving with hospitality the soldiers sent by the Junta to kill them. They are eating together, they are drinking together, they are laughing together. Some soldiers have left their units and have joined the local population. In a scenario of tension, it appears that in some areas at least, the people themselves have defused the tension.

And the west continues to say that Russian agents are causing all the trouble. I suppose the grandmothers handing out bags of food to the boys on the tanks are Russian agents as well? As time goes by, the sheer evil of those controlling western policies becomes so very crystal clear and can only be described in one word: Demonic, along with their political and military leaders.