"If Stones Could Weep": Syria, Blair's Plans and an Archbishop's Son

Not only is Middle East "Peace Envoy", Catholic convert and Butcher of Baghdad, Tony Blair gunning for another overthrow and mass destruction in Syria, he has recruited the son of an Archbishop to help him. Not any old Archbishop either, Blair's latest recruit is son of Justin Welby, the Archbishop of Canterbury, Primate of All England, who heads both the Church of England and the eighty million member Anglican Communion worldwide. 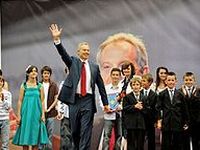 Blair has given Peter Welby "a key role" in his mega-funded Faith Foundation as: "a researcher for a new website ... that will analyse the role of religion in conflicts around the world."(1) Perhaps enjoining, as George W. Bush put it, a "Crusade" against majority Muslim countries might be an angle worth pursuing.

Photo: Blair in Kosovo visiting children named after him

Twenty three year old Welby is clearly a faithful Blairite, having already hawkishly warned of President Putin's "annexation" of the Crimea and that the British Government: "would be wise to consider reversing some defence cuts ..." As a "researcher" he clearly has a bit to learn, since the Crimean referendum with a 83.1% turn out and near 97% vote to cede to Russia had clearly passed him by.

He will surely fit well in his new post since the above exhibits a splendidly Blair-type mindset and abandonment scrutiny of facts - like weapons of mass destruction that can be unleashed "in forty five minutes."

However, it is with Syria that he follows Blair's line to the letter. The "Peace Envoy" embraces wars of aggression as a fish takes to proverbial water - courageously always traveling with an army of armed protection officers funded by the un-consulted British tax payer.

Blair's determination to do for Syria what he did for Iraq is a litany, but here are a random four: Legality ditched again, he declared of President Assad: "He's got to go ..."   (CBS 19th April 2012.)

There would be: " 'catastrophic consequences' if the West fails to arm Syrian rebels to defeat the regime of President Bashar al-Assad." (Daily Telegraph 19th June 2013.) Blair either missed or is cheering on, the unspeakable atrocities being committed by the (Western paid) foreign insurgents and terrorist groups.

As this was being written he popped up on the BBC's "Today" Programme again, loftily attempting to justify the catastrophes of Afghanistan and Iraq in his "I'd do it all again" mode and saying of Syria that the strong opposition of the British people (he didn't mention the "No" vote in Parliament) did not "invalidate" the need for action. As Stop the War put it: "We should invade Syria whether the British public want it or not."

The cynic might ponder on whether, for a man for whom precious human lives lost in orders of magnitude are clearly very cheap indeed, there is an element of pay-back involved.

At the beginning of November 2001, three weeks after the invasion of Afghanistan, Blair went to visit President Assad: "the first ever visit to Damascus by a British leader, to enlist support for the bombing campaign. Instead he was subjected to a recital of ... Western failures in the Middle East."

Rather than gather support for the bombing, he: "was forced to listen as the Syrian President heaped criticism on the killing of Afghan civilians."

"We cannot accept what we see on television, the killing of innocent civilians, hundreds now dying every day", Assad told Blair, adding that: "We are always against war" - and moreover, the West also placed little value on Arab lives.(2)

Whatever Blair's motives, Peter Welby is firmly on side. On 31st March he wrote, in an article for the Faith Foundation's website: "Last week I went to a presentation by Emile Hokayem hosted by the International Institute for Strategic Studies in London." In a "fascinating" talk: "Hokayem argued that engagement with Assad is not the way to defeat jihadist forces in Syria - rather, engagement must be with rebels more favourable to Western interests ..." (emphasis mine.) (3)

In a ramble about the complexities of terrorist groups in Iraq and their travels between Iraq and Syria, there is no mention that they were never there before in secular Iraq and Syria and, as mentioned previously, literally came in with Bush and Blair's tanks, in their illegal invasion, which also left all borders wide open for all comers.

Hokayem, writes Welby unquestioningly, thought Assad's victory "improbable", but his money is basically on the thugs and: "peace is unlikely until one group is sufficiently dominant to take the others with it."

No mention of countless beheadings, including children and of the numerous, unspeakable mediaeval atrocities meted out by these demonic, illegal immigrants.

In fact, even the Washington Post is of the view that President Assad's tide is turning and that: "He is in a stronger position than ever before to quell the rebellion" and indeed, to win a third term in the upcoming elections.(4)

Mr Welby's temporarily absent researching skills have also perhaps missed that Mr Hokayem, who does not just lecture at the International Institute for Strategic Studies, but works for them, seemingly has a touching faith in Israel's views, as evident in a recent tweet:

So, just as there was no reason to take his 1st LRB piece on Assad CW attacks seriously, there is no reason to do so with the 2nd one either

Last year's claim to which Hokayem refers, that Syrian government forces used chemical weapons at Ghouta has been widely discredited. Hersh's piece seems to put the lid on any doubts.

Perhaps, however, Peter Welby's appointment by Blair is not so surprising. His father is seemingly a close friend of the self-styled "Vicar of Baghdad" Canon Andrew "I get most of my money from the Pentagon" White.

On Justin Welby's appointment as Archbishop in November 2013 Andrew White commented: "What do you say when your friend and former colleague, the one who reopened St. George's Baghdad with me, is announced as Archbishop of Canterbury?

"Bishop Justin Welby is a great and wonderful man of G-d. I count it as a great privilege to have had him as my closest colleague ever."(6)

One man is incandescent about the appointment of Peter Welby and has written to his father in no uncertain terms.

Nicholas Wood is author of "War Crime or Just War? The Case Against Blair", a meticulous legal compilation of just that. Wood, is also Secretary of the Blair War Crimes Foundation. He writes:

"The Archbishop of Canterbury.

I enclose my book on Blair, and also a letter to the Prime Minister on his criminality. Though quite why I bother to pay the postage I don't know.

I cannot comprehend that you are someone who is supposed to think every day of moral values but not realise that Blair is a very dangerous psychopath, who, as well as causing untold devastation and misery in Iraq, wishes to extend that violence into Syria and Iran to protect Israel.

If you read page 570 of his autobiography you might possibly see what I mean."

Referring to Blair's advisory position to various heads of State, including Uzbekistan, of which former Ambassador Craig Murray blew the whistle on mind numbing torture, he states: " Your son will be benefiting, indirectly of coursei from money obtained from despots who boil their victims. This, under the guise of piety.

I was brought up as a child, a long time ago, to think of Thomas A Becket as a Saint, who resisted the power of a military state, and paid the price with his life. I cannot see you doing that.

I also was brought up to worship the medieval beauty of Canterbury, it's stones and it's stained glass. If stones could weep they would be weeping now.

Page 570 of Blair's autobiography to which Wood refers contains a phrase which should surely grab the attention of any psychiatrist:

"I had a vision for Britain. All the way I had believed I could and would persuade the country it was the right choice, the modern way, bigger than Iraq, bigger than the American Alliance, bigger than any one thing; a complete vision of where we should be in the early twenty first century; about how we finally overcome the greatness of our history to discover the full potential of our future."

Nicholas Wood says in succinct understatement: "I suggest that such a  vision should be restrained before it is emulated and allowed free rein."