US changes stance of Syria

The Obama Administration has suspended the work of the Syrian diplomatic missions in the United States and withdrew its ambassador from Syria. Obama's inconsistency with the Syrian conflict never ceases to amaze. Recently, Washington negotiated with the government of Bashar Assad at the Chemical Weapons Convention, recognized it was legitimate at Geneva -2 conference, and suddenly changed their mind. What are the causes and consequences of this decision? 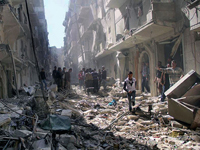 On March 18 the White House requested that the employees of Syrian consulates and embassies leave the country. The special American envoy on Syria Daniel Rubinstein said that they considered unacceptable work of persons appointed by the current Syrian regime in the diplomatic missions of the United States. He promised to re-establish contact as soon as the Syrian president loses authority.

The withdrawal of the ambassador means that for the White House it is more important to change the regime in Damascus rather than to destroy chemical weapons in the region. Breaking the diplomatic relations with Damascus means a return to the old policy of "social engineering" that the U.S. implemented in Afghanistan and Iraq, said the Russian Foreign Ministry in their statement.

Why did Obama chose such an inadequate solution? The first theory is an attempt to put pressure on Russia, a partner in the resolution of the Syrian conflict, because of its position on Ukraine. Furthermore, that same day, just a little earlier, an agreement on the annexation of Crimea to Russia was signed, and Vladimir Putin in his speech to the Federal Assembly unequivocally said that the West (read the U.S.) has crossed all possible lines, and there will be no negotiations with them over Ukraine.

The President has stressed that Russia intended to continue to defend the interests of its citizens regardless of where they live.  According to various estimates, 20 to 50 thousand of Russians reside in Syria. President Obama was called a "wimp" by the Republicans, and decided to respond to Russia for the "loss" of Crimea by deteriorating the situation in Syria, maybe through the toughest possible scenario, and at the same time improve his image.

The second theory is demands of the allies, Israel and Saudi Arabia. It is supported by the fact that the next day Israel bombed Syria. This was a response to an Israeli soldier stepping on a land mine allegedly installed by the Syrians in the Golan Heights. In addition, the other day a founder of the Syrian National Coalition Kamal Labwani announced the readiness of the opposition to give the Golan Heights to Israel in exchange for help in the overthrow of Bashar al-Assad.

"Israel periodically bombs Syria, but it is preoccupied with its own affairs related to the destruction of terrorist organization "Hezbollah." There is nothing personal against Bashar al-Assad," commented for Pravda.Ru Sergei Demidenko, an expert of the Institute of Strategic Studies and Analysis (ISOA). "Israel is well aware that as soon as Assad collapses, all this "Islamist joy" from all over Syria will be there. Israelis clearly say that Bashar is the enemy, but whoever replaces him would be the enemy ten times worse," said the expert. He added that last summer Netanyahu prohibited the members of his Cabinet to even speak about Syria; this is how strong Israel's neutrality on the issue is. "Israel is categorically opposed to any military intervention," said Demidenko.

As for Saudi Arabia, Obama plans to visit the country in late March. It is no coincidence, as the bilateral relations have become tense after the U.S. established contacts with Iran on the settlement of its nuclear program. Meanwhile, Saudi Arabia is very concerned with the strengthening of the alliance between Qatar - Turkey - Iran - Syria - Hamas. This is evidenced by the recent visit of Ramadan Shalah, head of the terrorist group "Islamic Jihad" based in Gaza and actively supported by Iran in Doha (Qatar). He came from Damascus to meet with Khaled Meshal, the ideologue and one of the leaders of Hamas who has fled from Syria to Qatar after the break off with Assad. Hamas is apparently trying to get back under the wing of Iran. Qatar, after coming to power of the new emir Tamim bin Hamad bin Khalifa Al Thani, supported "Brotherhood" rather than radical Islamists in Syria and Egypt.

However, he has allies, the other three countries of the Arabian Peninsula, Kuwait, Oman and Yemen that did not obey the decision of Riyadh on the recall of ambassadors from Qatar. Perhaps, Riyadh, scared of the increasing opposition, has already persuaded Washington to act.

Finally, the most likely explanation of Obama's actions is the pressure by internal forces, party or lobbyist (including pro-Israel). The "Hawk" faction in the State Department is represented by UN Ambassador Samantha Power and adviser Susan Rice. They act as speakers who are willing to breach the situation and are frankly pushing Obama to confrontation. "Against the background of the Ukrainian events everyone has forgotten about Syria, and fighting is ongoing there. As far as I know there is a plan to strike on Damascus from the so-called "southern front," from Jordan," believes Semyon Bagdasarov, an expert of the analytical Research Center on Central Asia and the Middle East. "A 20 -30- thousand strong grouping of opposition forces is being created there in order to break the situation not in favor of the government. Revisiting the idea of ​​applying air strikes is possible. Against this background the diplomatic relations with Syria were broken off. That is, we are saying that there will be a very serious escalation again in the near future," the expert told Pravda.Ru.

"This is not serious. It is like saying that Russia should vote at the UN Security Council for a missile attack on Syria. Our leadership will never do it. First, it would seriously affect the authority of Russia. Second, why would we give up Syria? This is a very important country in terms of strategic location where many of our interests are tied. I think this is discussed to discredit Russia's policy in the region and to convince the Syrian leadership to be more flexible. It is simply not serious, it's not true," told Pravda.Ru Semyon Bagdasarov.

In any event, Obama's decision to suspend the diplomatic relations with Syria means that the Americans are boycotting one of the parties to the negotiations at Geneva -2 and will no longer contribute to the negotiations between the government and the opposition in Syria. There is a bet on the radical opposition, and a massive military strike may follow.
Lyuba Lyul'ko