Last Sunday, during the referendum in Crimea Pravda.Ru continued to monitor the situation, reported on the historical events in real time and provided live coverage. In the middle of the historic day when, through an incredibly high turnout half of the voters have voted and it was already clear that the referendum took place, we established a direct connection with the writer Lev Vershinin. He thinks that if there is ever a movie about the Crimean referendum, the best name for it would be "Prison Break." 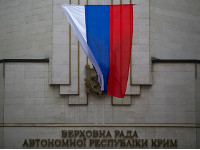 Before the vote, we were warned of a possible provocation. There were talks that some young people would dress up in the Russian military uniform and try to arrange some kind of diversion. Nothing like this has happened. Who should be credited for this?

"Of course, first and foremost the credit goes to the self-defense forces of Crimea, state security forces and the government of Crimea. They found convincing arguments in favor of why bad things should not be done. The government of Ukraine, Kiev junta, has cornered itself. It explained to the enslaved population that Crimea would not be given up. It got caught up in war hysteria, but its benefactors took a step back. In this situation, given the great work done by the Crimeans, small provocations would have threatened the underground operating there, and large provocations would have had unclear consequences.

At the moment everything is fine and quiet. But Crimea has a serious underground, and provocations can be expected at any moment. Nevertheless, let's hope for the best."

The only incident so far, according to the Ukrainian sites referring to the election committee chairman, is soldiers complaining that they were not allowed to participate in the referendum. Perhaps it would be wise to look at these allegations skeptically. I know that you have some information about what is happening in the South and East of Ukraine. What is going on in these regions and what do they mean for the Crimean referendum?

"The situation in the South and East of Ukraine fits into the definition of "scary." Large modern cultural cities are slowly captured by the fiercest Nazism. Militants from ultranationalist organizations are officially included in the so-called National Guard of Ukraine, to put it bluntly, SS. They are gradually occupying the South and East of the city, especially East, organizing terror.

In Kharkov, peaceful residents were shot at from a machine gun, and the city authorities and the collaborationist, junta appointed Gauleiter did everything to avoid storming the building where civilians were shot from. It is highly possible that they will be released. In Donetsk, peaceful demonstrators were beaten and killed by provocateurs. All this takes place with the consent of local authorities and the local oligarchy. My mailbox is full of people's pain.

East and South of Ukraine are incredibly jealous of Crimea. Many people are protesting as much as they can, but they cannot do anything, they were betrayed by their officials. The Nazi leaders are cleared by the security service led by CIA agents Nalivaychenko and Yarosh.

The situation in the South and East can be fully expressed by the statement: "Warrior of the Russian army, save me!" People are waiting to be rescued. These are ordinary, normal, decent people who reject Nazism, are ready to fight fascism, and are in a big trouble.

I fully agree with Mr. Lavrov who at a press conference spoke about the need of federalization of Ukraine as the only way to preserve Ukraine and restore law and order."

Have you seen the March of Peace in Moscow attended by the same crowd that appeared in the Bolotnaya Square and other protests? Do you think they are really against the referendum campaign in Ukraine, or just found a way to speak in support of the Maidan and the current Ukrainian authorities? Was this a spontaneous or planned rally?

"Let us ask this question: how can a reasonable person interpret soaring Bandera banners above the crowd of liberals, the banners of the organization disgraced by massacres? When a representative of the Maidan self-defense, a neo-Nazi organization formed by a neo-Nazi Parubiy speaks before the crowd of liberals, how can a normal person interpret it? How can one interpret a wild situation where Russian liberals are blind to the heinous crimes committed in Kiev, the rampant Nazi crimes?

Certainly it is not a spontaneous surge in support of Ukraine. If we were to think so, then the following conclusion is that every Russian liberal sympathizes with the Nazis. I refuse to believe it is possible. Consequently, not only logically, but in fact, the events in Moscow are part of the script designed and prepared by those who are very interested in maximizing the weakening and collapse of Russia. I think this march was intended as the beginning of a larger campaign. It is reminiscent of the beginning of the Kiev Maidan, so far soft and harmless, with intelligent persons and celebrities.

There are two other moments. First, during this march people took off their hats in honor of the people shot by snipers, funded by oligarch Poroshenko and initiated by neo-Nazi Parubiya. Nobody remembered the peaceful anti-fascist Kharkov residents shot the night before by neo-Nazis who still remain unpunished. Second, TV channel "Rain" mentioned the word "non-humans" referring to the participants of an alternative anti-fascist march.

Russian authorities and the Russian society should pay attention to the participants of this march, no matter how famous and well known are the people leading these protests. No cultural merits justify creative people and actors acting in support of Nazism. A sad fate awaits these people. There are impressive examples.

Andrei Makarevich (famous Russian singer) participated in the protest with a Ukrainian flag pinned to his coat. He never suffered from lack of attention from the authorities and was even close to some of them. Suddenly he found himself in the liberal ranks. Could it be that he simply does not understand what he supported?

"He does not understand. In the celebrity community opposition is trendy. They are fed by the same people. Makarevich is known to intellectually cater to the people who own TV channel "Rain." Usually, later in immigration they cry that they've made a mistake."

Let's get back to Crimea. If the majority votes in favor of annexation to Russia, Russia will have a new region. Is Russia ready to host and finance it, provide residents with income?

"I am not an economist, and not ready to answer the question from a financial point of view. I agree with Mr. Aksenov who said that Crimea is not a poor relative. Crimea will require some spending, but there will be a significant payoff, including from the shelf. But let's not talk about that now. Any return of the territories of the Russian land is an important step to restore the united Russia. In geopolitical, moral, political and historical terms, this cannot be overemphasized, it is extremely important. There are numerous economic reviews, so read them. Crimea is not a poor relative, Crimea has a great dowry, and if we approach the matter from this purely mercantile position, each invested ruble will certainly be rewarded handsomely.

I read reports of various experts, and I can say that serious Western financial institutions agree on the fact that Crimea is not a burden for Russia, but a profitable acquisition. The reunion will be profitable for Crimea as well. There are plenty of mutual advantages. We will have to invest in Crimea, but any step in this direction means the economic strengthening of Russia in the nearest 2 to 4 years. The technical issues will be resolved. Let's not forget that in the current demographics a serious, worthy Slavic population will be very good for the Russian Federation in today's difficult democratic time."

The issue of the adoption of Russian citizenship by the Crimean population is clear. What if some Ukrainians ask for Russian citizenship, what would be the grounds for granting it? Should this procedure be simplified for the citizens of Ukraine?

"It is definitely worth doing. All Ukrainian presidents since Kravchuk, including Yushchenko, promised dual citizenship in one way or another. In essence, it is one country and one people except for the historical land belonging to Poland. There is a small but significant nuance. Today, every Ukrainian citizen who enters Russia and is granted citizenship may be a representative of a terrorist organization, which is very dangerous because they are indistinguishable. This is a difficult question that should be handled by experts."

This is the fundamental principle of normal civilization. Any person has the right to live in their homeland, as part of their people, on the territory where their ancestors lived for centuries. Every generation has a right and a duty to protect this land and pass it on to their offspring. You already know about the results of the referendum and the subsequent annexation of the Republic of Crimea and the Hero-City of Sevastopol to the Russian Federation. Congrats on reunification, comrades! It is time to gather lands. It is time to go ahead!