Transdniestria may become part of Russia

The Supreme Council of the unrecognized republic of Transdniestria appealed to the State Duma of Russia to provide for the possibility of entering the region in Russia in the Russian legislation. After the events in the Crimean Republic the country is under siege. Ukraine imposed restrictions on travel for Russians in Transnistria through its territory. The border was closed for cargo as well. 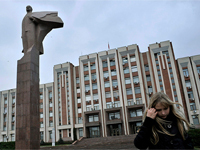 "So far this problem affects only males with Russian passports, but it has affected not only those traveling by road, people are being removed from trains," she added. The Minister said that blocking goods intended for peacekeepers was unacceptable. "Ukraine is not only a guarantor country in the normalization of the relations, but also a member of peacekeeping operations in which it acts as a military observer," said Nina Shtanski.

Border Service of Ukraine declared that this is done to not allow terrorists allegedly prepared in Transnistria on the Ukrainian territory. According to the authorities of the unrecognized republic, in the near future they face a complete isolation. Under such circumstances, an appeal on behalf of the Chairman of the Parliament of Transnistria Mikhail Burla to the Speaker of the lower house of the Russian parliament Sergei Naryshkin is justified.

The letter states that the Parliament of Transnistria has adopted in the first reading a law recognizing the Russian legislation as part of Transnistrian, and recognizing Russian as a national language. There are concerns that sanctions might follow from the official Chisinau, which would further worsen the "difficult position" of Transnistria. Mikhail Burla also noted that the bill of "Fair Russia" on the facilitation of accession of new Russian territories only makes it possible for Crimea to join.

"We withdrew the bill on a simplified procedure of joining of independent states and territories because the procedure of legal resolution on Crimea has changed," explained to Pravda.Ru Tatiana Moskalkova, deputy chairman of the Duma Committee on CIS Affairs, Eurasian integration and relations with compatriots.   "Since Crimea has declared itself an independent state, its adoption to the Federation became possible bypassing intermediate contracts, i.e., according to the current legislation. The will of the people is what matters, and enclave status of Transnistria is not an obstacle. "

The deputy believes that Russia should first use all diplomatic instruments and demand the elimination of violations. Until these measures are exhausted, there have to be appeals, but if Moldova does not make conclusions based on the Ukrainian events, Russia is ready to take decisive steps to protect its citizens as it was done in Ukraine, she said.

Meanwhile, Vyacheslav Tobuh, the chairman of the Republican movement of Transdniestria "Recognition," member of the Supreme Council of the TMR, believes that Russia has a legal basis to accept Transdniestria to the Federation. Since there is a declaration of independence, the only thing that needs to be done is recognition of that status, as it was done in Crimea.

"On September 17, 2006, the referendum on Transnistria by an absolute majority made ​​a positive decision on two issues. The first issue is the recognition of the TMR, and the second issue is the gradual entry into the Russian Federation," the expert told Pravda.Ru. "Now we have to hold this position of the people and resist Western propaganda machine that has been working in Moldova on Transnistria," said Vyacheslav Tobuh.

"I think that in Transnistria, like in Crimea, public organizations kept the momentum. We've done our part, now it's up to the leadership of the Russian Federation. We sincerely believe and hope that the will and spirit will prevail, and we will live in one country," said Vyacheslav Tobuh.

"The political situation around Transnistria is different from the Crimean," told Pravda.Ru Mikhail Emelyanov, deputy head of "Fair Russia" in the State Duma.
"There's a legitimate government, Moldova observes truce, there have been no threats of armed attack on Transnistria and the lives of the Russian-speaking population. Much will depend on the leadership of Moldova. If there are further steps and even rhetoric aimed at the integration with Romania, Transnistria will immediately be part of Russia."

Moldova President Nicolae Timofti on March 18th said at a press conference that the address of TMR to RF was counterproductive, and was not intended to benefit Moldova or the Russian Federation. If Russia took such a step it would be a wrong decision, it would not add prestige to Russia in the international arena. Timofti, however, admitted that there were similarities between the situation in Ukraine, Crimea and Transnistria.

"Russia will not move on the request for annexing this territory, however, to preserve the legal framework on the left bank of the Dniester, it may recognize Transnistria as an independent state," said an attorney Theo Kyrnats to Moldovan TV channel Publika TV.

"Moscow does not need Transnistria within the boundaries of the Republic of Moldova. According to the plan, that likely is being tested in the east of Ukraine, Russia most likely wants a federation, and not the country under the name Republic of Moldova without Transnistria," said the former Minister of Foreign Affairs of Romania Adrian Cioroianu.

However, Moldovan and Romanian experts say that the situation in Ukraine is destroying the existing format of negotiations on the Transnistrian issue. Two of the major international mediators and guarantors of stability in Transnistria are in a state of war." The 5 +2 negotiation format was established in 1993. Under this format Chisinau and Tiraspol are parties in conflict. Russia, Ukraine and the OSCE are mediators, and the U.S. and the EU act as observers. Russia has 400 peacekeepers in Transnistria.

"All pro-Western politicians in the CIS countries should realize that the key to their independence and integrity is not in Washington, not in Brussels, not in Berlin, but in Russia," said deputy Mikhail Emelyanov. "Only Russia's goodwill and its desire to follow international agreements led to the fact that they were recognized painlessly, unlike Yugoslavia, were given the opportunity to develop as independent states and provided assistance, in fact, free of charge, and supplied oil and gas in the early stages. The West stimulates their aggressive behavior against Russia, but at the crucial moment gives them up. This happened in Georgia and Ukraine. Therefore, they should really think hard before performing any anti-Russian actions. "