Centuries ago a wise man wrote that there's no nicer verse than what the poem says "when your heart calls you, how do you respond?". In these our recent days, Ouday the old Syrian wrote to me that the answer may be this: Damascus you are the chalice, the brush, the sword. 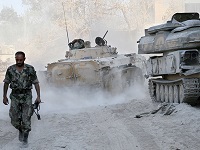 It is not just the old Syrian who thinks so, because others have given this same answer without even knowing the demand of the poet.

Among them, many have lost their lives at the hands of those enemies who now vilify Syria for three years with the hope of bending it and defeat it. But Damascus, always been a crossroads of a thousand roads, a thousand kingdoms and empires, still stands unconquered.

The firmness of Russia and China in dealing with the American madness and the generous loyalty of Iran would not be enough without the sense of unity of the Syrian nation and the loyalty of his army.

Few among soldiers and officers have defected to fight a revolution that has shown his true colors right away. If the war continues, it is not because the Syrian people as a whole want to overthrow a cruel dictator, but because the Western powers inject even now phalanges of foreign fighters across the Syrian border, providing them with training, weapons, communications, and even safe havens for injured.

It is certainly not a novelty that there are groups of Chechen fighters in Syria, who have joined Jordanians, Saudis, Qataris, North African, Afghan, Pakistani and other Muslim fighters coming even from Europe.

Here, however, we do not want to talk about the cannibal killers that were triggered by the West against Syria just to destroy it and take possession of its wealth.

Here, again, we want to pay a tribute to those who have remained in place when they could instead escape because everything was or seemed lost. To those have committed when they could not do it. To those who did not hide themselves behind some inglorious excuse but faced their duty and played to the extreme sacrifice.

Here, again, we want to honor the many we do not know remembering the few we know.

Here our thoughts go to the young martyr Hassan, fell near Homs in February, in the gentle beauty of his 21 years of age and in the just pride of his diploma, recently awarded with the highest marks.

Hassan could emigrate as a refugee, perhaps in Europe, he that already came from Lebanon, but did not do so. Syria had given him hospitality and allowed him to study and trust in a peaceful and prosperous future. But he found natural to reciprocate the generosity received offering himself. He knew he could lose his life by wearing the uniform of the People's Committees of Defense but he chose to stay and defend those who had welcomed him in the past.

Let's remember Lt. Lena Murzi, fall towards the end of January, near Aleppo, bringing the uniform of the Syrian Arab Army. In the future of Lieutenant Murzi there had to be the wedding with her beloved, but fate had decided otherwise.

Let's not forget the sacrifice of Brigadier Ali Johnny Runde, medical, fall into an ambush near Tartous in March 2013. Her duty was to treat wounded comrades, give them help, save them when possible.

Let's not neglect the memory of Captain Taghrid Hamdan, the first woman to be killed wearing the uniform of the Syrian Arab Republic. Captain Hamdan has been killed near Damascus, in the performance of her duty. Mitted military uniform, she was the mother of a daughter and a son.

Finally, let's honor the sacrifice of Mervat Saeed, of the Republican Guard. Young, beautiful, certainly full of life. She could serve her country in a different location, more secure and away from enemy fire. Instead she met her death a few days ago, fighting near Darya.

We must not forget the sacrifice of these martyrs but, on the contrary, we should remember it as a precious treasure.

And we must surely remember the hypocrisy of the West that calls itself civilized.

While the Arabian woman is likely to be beheaded on charges of sorcery or of being considered a scandal if she asks for driving a car, the Syrian woman may become doctor, engineer, judge, airplane pilot, soldier.

The Syrian woman is closer to the Western woman's figure than the women in other Arab countries. This fact does not cause any reflection in the Western intellectuals who applaud what is happening in Syria as if it were a real revolution.

In fact, the victory, nefarious, of the Islamic fighters will not mark a further social progress for Syria.

The peace conference named Geneva 2 has failed in the silence of the mainstream media, too interested in criticizing the Olympic Games in Sochi. The war, however, has never stopped, and we can only try to give voice to the many brave people who are unknown to us through the few that are not.