While the U.S. is enthusiastically engaged in the struggle with the Russian "anti-gay laws," conservative American states are busy "violating the freedom of sexual minorities." In Kansas the lower house of parliament passed a law that entitles businesses in the state not to serve gays and lesbians if it contradicts their religious beliefs. 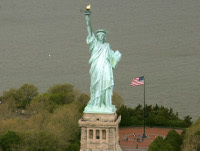 The laws that (according to the LGBT community) infringe the rights of gays and lesbians exist in at least eight more states (Alabama, Arizona, Louisiana, Mississippi, Oklahoma, South Carolina, Texas and Utah). Against this background, the decision of the lower house of Kansas on February 11, 2014 was neither a sensation nor something phenomenal. The position of U.S. lawmakers is interesting in this situation. More precisely, what other countries would think of their lawmaking. Russian politicians are the ones accustomed to tailoring their decisions to the opinions of the West and U.S. Overseas, the situation is different.

Shortly before the Sochi Olympics, the West, including some media outlets in the United States, were indignant about the law on the propaganda of non-traditional sexual relations among minors" adopted in Russia. Foreign journalists contacted the Russian president with questions about gay rights and even called for a boycott of the Olympics.

In the midst of the 22nd Winter Olympic Games Kansas lawmakers were quick to approve the bill entitling people with religious beliefs (including not only individual entrepreneurs but also government employees) to refuse goods and services to homosexuals. Anti-discrimination lawsuits are prohibited under this law.

This is not about the fact that the news did not please the LGBT community and some European states that legalized same-sex marriage. There is no consensus in the United States in this respect, similar to the issue of a moratorium on the death penalty or legalization of recreational drugs. Each State has its own laws. In California homosexuals are more comfortable than in Kansas.

We agree with the CEO of the Russian Council on International Affairs Andrei Kortunov who said that "a significant part of the American society is very conservative, even more so than in most European countries. This can be seen in many ways, in particular by church attendance. A number of U.S. states have laws regulating sexual behavior and general rules of human coexistence. Legislators are free to adopt any laws they please. Why would they care that some of their compatriots attacked the Russians for "lesser evil" against sexual minorities?

Celebrities are not going to rush to protect "the poor and persecuted" gays in Kansas. Why? "It is unlikely that they will actively protect the rights of the LGBT community in Kansas," said Andrei Kortunov. "From a marketing point of view Kansas loses to St. Petersburg in many ways. This applies not only to Kansas. A recent adoption of a new legislation in India that criminalizes same-sex relations has not caused a surge of comments or any public action. Maybe they were some comments, but the media did not talk much about it.

This is another example of notorious simulacrum. This is not about the reality, this is something blown out of proportion by the media. Maybe this is why young people have to convince themselves and others that something is happening "for real"? At this stage, the organizers need to convince everyone that the main persecutor of sexual minorities is Russia. Puppets of show business and "incorruptible" media were involved to achieve this goal. Where does this come from? The answer is simple. This comes from the eternal fear of the great Russia. They are not acting to protect the rights of some minority, they are acting to solve urgent political tasks. This is the opinion of all experts interviewed by Pravda.Ru.

There will be ways to "cope" with Kansas, and quite likely a compromise will be found. Russia remains an uncontrollable "object" for the American superpower. For this purpose supporters among Russian citizens were engaged. The former security chef of Russia's first president and State Duma deputy Alexander Korzhakov wrote the following in his book "Boris Yeltsin: From Dawn to Dusk": "If I were to simply list the names of the officials who have held and still hold public office, or simply famous leaders, members of known parties, company presidents who are gay, I think many readers would have been shocked. Today it is a fact - gays have occupied a niche in the political, journalistic, music, pop, and creative elite. The main question, I think, is this: is it everybody's private business or not?

Everything depends on the position in society. If these people occupy high positions in the government (from the executive to the legislative and judicial (!) ones, head media outlets, then, first, they unite to create a parallel world of their interests. Second, they begin their lobbying in latent form, unlike in the West, where it is practiced openly and in some places even legally. They promote their people, protect them, and otherwise patronize them. At the same time the talented or not very talented gays lose their freedom. They cannot, for example, defend some fundamental issues, decisions, if their "clan" is not interested in it. They practically are no different than the recruited agent of influence ... "

As long as Russia is a "weak link" in the games of Western politicians, the Russians will constantly be facing imposition of such rules. This will be done for political reasons, to force unruly Russia on its knees. It is not about who is sleeping with whom, what matters is who is under whom in real politics on the geopolitical board.