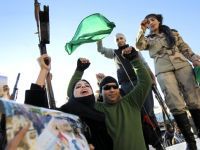 1. To what extent is the NATO-backed "Government" of Libya in control of the country?
This rebel government has very low support among the Libyan people, maybe 8 - 12% of the rebels have control in Libya, many parts of Libya are controlled by militia, gang units, Ansar Al Islam and Qaeda terrorist groups. The powerful support of rebel government is from Misrata, some units do not accept the government in the rank of the rebels.

2. Given that in the election, the Jamahiriya was not an option, what percentage of the people would vote for it, if it was an option?
85 to 88%o Libyan people support Jamahiriyah, when no option is put forward for green Libya, very few people will come to vote.  This will be a major and serious continued problem.

3. How can we compare life before and after the NATO-led invasion of Libya?

Now life is very bad, very bad and much worse now than before, no security, no food for the people, no gas in Tripoli, no electricity, very bad condition for roads, hospitals have no medicine, abduction of women and killing everywhere.

4. What percentage of the terrorist groups involved in the NATO atrocity were actually Libyans?
Maybe 20%, most are from Misrata imported Israeli Mosad mercenaries, Al-Qaeda brought by Qatar from all over the world.

5. What is the way forward for the Green Resistance?
Fighting the rebels with good air defense systems to counter NATO airforce and drone challenge. It is to fight and defeat the rebels, the rebels are foreigners, they are not qualified to make peace and compassion with Libyan people, they always kill the Libyan people to take our land, gas, we must fight them with modern weapons.

6. Saif al-Islam al-Qathafi's "trial" is scheduled to take place in Zintan in January or February. Do you have any idea as to the probable outcome? Could he lead the Jamahiriya to form a Government backed by the people?
Zintan is trying to find a solution for general amnesty, they find no crimes committed by Saif, many of the cases against Saif come from Tripoli, there is no government in Libya to put Saif on real trial, every person is buying time.  It is either they kill Saif or they allow him to go free, there is no proper case, judiciary or jurisdiction in Libya against Saif, and many prisoners. Yes, the Libyan people support Saif, the tribal council also supports Saif, he can very easily form a government. There is great support for Saif, the Libyan people will vote for Saif.

NATO countries, USA, Qatar, and Turkey will not accept Saif, inside Libya many people need freedom for many prisoners, the Libyan people need Saif, this problem needs a nuclear bomb to send NATO out of Libya. Zintan want freedoms for Saif, they fear he will be kidnaped and killed by Misrata Israeli, Qatar or Al-Qaeda mercenaries, none of these are good options.

Green Command is the force of the Libyan People's Jamahiriya fighting to expel the foreign- and NATO-backed terrorist forces from the country and to restore the Jamahiriya democratic system of government.