Tension in Kiev seems to be subsiding. The city police are vacating the city and government agencies from activists of another fading color revolution. What new coup techniques with the use of social network activities were introduced by Euro Maidan? Ara Stepanyan, the executive secretary of the Academy of Geopolitical Issues, talked about it in a live feed of Pravda.Ru.

Observers note that the "Orange Revolution," or whatever it is called, in Ukraine is very similar to the Syrian scenario. Do you agree with this opinion?

"The technology is the same, it is designed in America, but the executors and the script are rewritten with consideration of the environment. Syria has its own peculiarities. It is controlled by the Alawite minority, they decided to unite the Sunni majority against the minority. They have failed, the Sunnis supported, and then they had to gather terrorists from around the world. Ukraine has equal separated elite groups, clans that are fighting and cannot win over each other.

We see how the opposition acts - brazenly rude, like bandits; they know that there will be no repercussions. Their Western masters gave them green light to overthrow the government in any way, they are not afraid of any punishment because there will be none. The power elite, power structures are already afraid to take measures because they do not know how the Supreme Commander would react to it and what sanctions against them may follow. 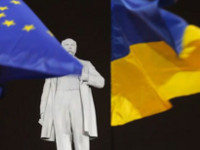 The ruling elite and the opposition elite have lost confidence of the population. They are not solving social and economic problems of the society; they are only dividing influence and resources. Today, the population wants to see new leaders, unblemished, unattached. The conflict is obvious, and they cannot find the solution because their fate is decided outside of Ukraine. Their Western masters have activated all levers; their officials have come to the Maidan to advocate, inspire, and call for action. Can you imagine Russian leaders in this role? There would be uproar of the "democratic" Western society.

Navalny dragged masses from villages to the Bolotnaya Square. But there are people on the Maidan, there is opposition, so who are they?

"There is plenty of information about it. Everyone is paid. There are world champion Klitschko's fighters, it is a professional group, trained and highly paid. People are invited from other regions for pay. This technology was tested during the presidential election, the "Orange Revolution." They can throw people from one city to another city. A thousand, two, three, as they did in Kharkov, in order to show that eastern Ukraine is also rebelling. Here all the means will do - rock concerts, bribery. Certainly there are those who sincerely believe in a better future."

Is a split of Ukraine possible?

"Ukraine is conditionally divided by ideological and geographical principles. First is a pro-Russian eastern and south-eastern part of Ukraine. We will call it the New Russia or Ruthenia. Then there is central Ukraine with the capital in Kiev and Gatmovschina. And Galicia, the western part dominated by Bendera ideology. These are three main parts.

Russia is fighting for central Ukraine, because the eastern regions are already pro-Russian since they cannot recognize and accept the worldview of Galicia. For them it means abandoning their ethnic and cultural foundations, that is, abandoning their Russian origin, Russian culture, and Russian language. Russia will certainly fight for this electorate. Galicia is not that important for Russia because this region is geopolitically insignificant.

Theoretically, there is a threat that the country would split into three parts. But neither the West nor Russia are interested in the split of Ukraine. Eastern Ukraine and south-east feed all the other regions of Ukraine. But for the West (the EU), this scenario is disadvantageous because then they would have to feed western Ukraine. The European Union is already feeding the Baltic states whose economy they've destroyed. Obviously, Western conditions are not satisfactory for Yanukovych. He would be happy and ready to go to the West, but since the conditions are harsh and do not suit his clan, he refuses it, knowing that it would kill the entire Ukrainian industry.

It is unclear why the Ukrainian president found himself at this crossroads. When they say that Yanukovych is in doubt, it is true. In such a difficult period for the country he leaves for China for four days, leaving the country to fend for itself. Certainly, this is a wrong move."

But before he wasn't at crossroads, and Ukraine was moving towards the EU. The crossroads appeared only now. Does Russia have anything to do with this decision by Yanukovych?

"The goal is obvious - completely and by any means tear Ukraine away from Russia. Incidentally, this is geopolitical thesis of Brzezinski: Russia without Ukraine is becoming just a regional power, and not a great power.

Russia is offering Ukraine more than the European Union can offer as it is preoccupied with its own problems. The approaching economic crisis is putting them down on their knees. They've never been a separate independent entity, a geopolitical actor. The United States was always behind them, manipulating them. A recent example is toothless, spineless statements on the wiretaps. They were unable to oppose, put forward demands, or impose sanctions. This suggests that Europe has failed as a single political actor.

So we cannot say that Russia was pressing Yanukovych to take the position of Russia. We cannot ignore the events in the West, just look at the statistics of the former Soviet Baltic republics that are already in the European  Union. The numbers of immigration from the Baltic Sea to Western Europe are terrible: 14 percent of Estonia's population has emigrated, 17 percent have left Lithuania, 33 percent have emigrated from Latvia. The British had to take measures to stop the influx of immigrants from Latvia. They already have 400,000 Latvians.

Eastern Europe is beginning to understand that ideology cannot feed them. Eastern European countries have signed a large package of documents on mutual economic assistance with China. China is present in Africa, Latin America and now in Eastern Europe. Bucharest signed the documents because they need investment money, not great ideas about sexual equal rights, gender policy and juvenile justice. Eastern Europe is beginning to see the light, it sees that the European Union is a small, marginal, harmful group that generally inhibits the development, and the United States of America is behind it."

Pro-Western lobbyists in Ukraine's highest political elite tried to advance the vote of no confidence to Azarov's Government, but the parliament majority refused to support this initiative. Does this mean that the government has a strong anti-Western Ukrainian force?.

"Azarov and his team are industrialists, sober people, and understand that the West, democracy, and so on is one thing, but the need to feed people, provide them with jobs, wages is another. If they refuse preferences and privileges offered by Russia today, no industry will survive. Unemployment will be terrible. Look at the Baltic states where in Lithuania and Latvia unemployment is at 17 percent, and this is for the period from 2008 to 2009."

If Ukraine were to join the Customs Union, what would the European Union do? Would this result in a complete blockade and sanctions for the country?

"First of all, they will impose sanctions against individual leaders or politicians in Ukraine, those who signed the Customs Union. If they have accounts, they will be arrested as criminal, anti-democratic, and so on. Then they will permanently organize and provoke riots, rallies and, of course, form public opinion as they do today, saying that the police allegedly applied excessive force.

But generally it will be beneficial for Ukraine. A couple of officials would be banned from travelling abroad, and so what? In Belarus, incidentally, there are plenty of such officials, and the country is thriving and developing."