After a few weeks of debate, the French parliament has adopted a bill providing punishment for the clients of prostitutes "for purchasing sexual intercourse." It is obvious that such a step did not increase the popularity of the Socialist government. However, President Francois Hollande dutifully continues to conduct experiments conceived by the world government on his own people.

Prostitution is legal in France as self-employment, while public houses, pimping, soliciting on the street to potential customers and prostitution of minors is banned. Men and women over 18 may receive payment for sexual services, but are not allowed to advertise their activities. On Wednesday, the French National Assembly has approved the bill criminalizing clients of prostitutes, 268 deputies voted for the bill, and 138 against it. By law, if the Senate approves it, those convicted of "buying sex services" will be subject to a fine ranging from 500 to 1,500 euros. The law also provides for measures of social and professional support to those engaged in prostitution. The Government is committed to spend 20 million euros per year to fund the fight with prostitution, and is ready to provide new jobs and residence permits to former prostitutes.

Many MPs who voted against the bill expressed their doubts about this plan, since most prostitutes are illegal immigrants from Eastern Europe (Bulgaria, Romania), Africa (Nigeria, Cameroon), China and South America. According to the president of the Christian Association Mouvement du Nid, the official data show that 15 to 18 thousand people in France are engaged in prostitution. She believes that the real numbers are significantly higher. She said that is some cities, for example, in Strasbourg, the number of prostitutes who came from abroad may reach 90 percent. These are women from Russia, Belarus, Ukraine, Moldova, Poland, Czech Republic and Albania. In Paris this number is approximately 70 percent. 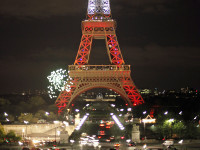 Jean Leonetti, a representative of the Union for Popular Movement (UMP) said that this was a fantastic opportunity for filling the illegal immigration with air. A co-chairman of the Green Party said that the law showed incompetence in the main question what comes first - a network or consumption of sexual services. The Green Party is the main opposition to the bill. They cited a negative forecast by the Doctors of the World that indicated that the measure would only encourage prostitutes to engage in underground activities.

Feminist organizations and movements representing prostitutes had similar doubts. "Manifesto against the criminalization of prostitutes and their customers" group wrote that they were united in the fact that criminalization of the clients would not eliminate prostitution, but exacerbate uncertainty of the prostitutes, forcing them to go further underground and move them away from the support groups and health groups. Morgane Merteuil, general secretary of Strass, the union for sex workers in Paris told Le Figaro that in the end, the repression will be only enhanced, which would push sex workers further underground. Merteuil expressed hope that the Senate would not approve this law.

At first glance at the inadequate law, it seems that the ruling Socialists have decided to raise the unprecedented low rating of its president Francois Hollande, and at the same time fill up the empty treasury. However, both goals are not feasible. If there is legalized service, why should its customers be criminalized? Would it be logical to legalize brothels and pimps and take taxes from them if the goal is to replenish the treasury, or, if the goal is morality, would it be logical to ban prostitution? The "Tax on customers of prostitutes" would not be collected similar to the 75 percent "tax on the wealthy." As a result of the introduction of the tax on those earning over 1 million euros a year, the wealthy French have simply changed their legal address. In this case, given the European open borders and brothels available an hour away in Belgium, Spain, and Germany, the customers' money would simply move there.

In addition, given the developed online services it makes no sense to fight with street prostitution. In the comments the French wrote that the government had once again showed its incompetence, and recommended it to deal with the real problems of the French - unemployment and social protection. Could Francois Hollande and his advisers be that unprofessional?

"France is becoming a model for trying out certain methods emanating from the center of the global governance," Anna Filimonova, a researcher at the Center for the Study of the Balkans Crisis Institute of Slavic Studies told Pravda.Ru. "France became the instigator of NATO; it was France that organized the overthrow of Muammar Gaddafi. France initiated some strange social initiatives that are clearly against the will of the majority. Francois Hollande is a protégé of the Americans. He is destroying the education and health systems and is doing it under the slogan "back into barbarism and slavery."

"France is becoming a testing ground for experimentation of what the world would look like under the control of the world government in a few years. We see the destruction of the welfare state, and these games with prostitution are also an experiment, albeit on a smaller scale. With this law opening the door to the legalization of live goods from the Eastern Europe, Hollande outs his population under a threat since the criminal situation will be aggravated and the tax burden will be increased. This is an appearance of activity, imitation of the fight with crime, and no one wants to dig deeper into this phenomenon because it is not allowed. In fact, Hollande is fueling drug crime and other crimes coming from Eastern Europe and especially from Kosovo," concluded Filimonova.