The International Defense Industry Exhibition MSPO 2013 took place in early September of this year in the Polish city of Kielce. The main novelty was shown to the public before the exhibition. This was a new development - PL-01 tank that a consortium of Polish defense companies decided to show to a wide audience before the opening of the exhibition.

The Poles announced the commencement of work on a new project of a national tank back in mid-February. Then it was reported that companies OBRUM, Bumar and Huta Stalowa Wola have begun the development of a promising tank for the Polish Armed Forces. Later, in May, a cooperation agreement with the corporation BAE Systems was signed. 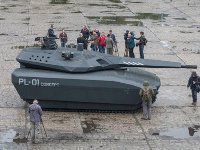 At first the information about the tank was quite scarce. It was reported that it will have a combat weight of approximately 45-50 tons, the turret was to be unmanned, and the ammunition was to be placed in an insulated compartment similar to that of Abrams tanks. The pictures of the tank resembled those of another Polish development, Anders, and, apparently, the tank was to represent its revised version.

After the first presentation in February the long-term Polish tank was forgotten, and reemerged in the news only after its life-size model was built and shown at the exhibition. The model brought to the MSPO 2013 was similar to that demonstrated in February. However, a new concept had a number of differences. Polish tank builders have likely taken into account the peculiarities of certain technical solutions and changed the appearance of their prospective tank to incorporate all new trends.

However, a concept model is one thing. One can invent and manufacture anything of plywood and plastic. Its real embodiment in metal is quite another story. So far the new Polish tank PL-01 is still far from practical application, although its main features have now been identified and are likely to remain unchanged in the future. Previous developments of a Polish tank Anders were widely used in the project. At some point Anders was considered an advanced development and was meant to radically improve the state of the Polish armored forces.

Generally, PL-01 has the overall layout of the Anders tank, which indicates the preference of the Polish designers. The engine-transmission compartment is located at the front of the tank, similar to Israeli tank Merkava, and the rest of the space is designed to house the crew and ammunition. The idea of the front location of engine and transmission is supported by the shape of the front of the vehicle with the driver's hatch shifted back, again similar to Merkava.

It is too early to talk about the armor characteristics of the PL-01as not much can be said about the thickness and design of the armor based on a model. Perhaps, as in other modern tanks, the most powerful armor on this tank will be installed in the front part of the hull and turret. In any case, the tilt of the upper front part will improve the defense of the front projection. The sides of the model have large, relatively thick screens. Judging by the size and appearance, they may contain a multi-layer composite armor, but we can only guess what material it will be made of.

PL-01 turret is small, and like the hull has a peculiar shape of numerous flat panels, but the reasons behind this technical solution are not entirely clear. It is likely that the design considered the possibility of reducing the radar detectability of the tank through the application of stealth technology.

There is another theory that the unusual appearance of the tank is due to purely aesthetic preferences of the designers. If so, it is not very good, because tanks, just like restaurants, should be built for the consumer rather than for pleasing personal tastes.  A restaurant built to the taste of the designer is 80 percent likely to go bankrupt, and tanks are no different. An attractive appearance is not an indicator for the tank, as tanks are not planes.

One of the most controversial solutions in terms of the original appearance is the casing of the guns. The quadrilateral chopped design is significantly different from those used in modern tanks. This fact may also confirm the aesthetic theory of the origin of a number of units.

Most obviously the "aesthetics" of the tank was manifested in the original casing covering its 120-mm smoothbore gun. Only a small part of the trunk and a muzzle brake come out of the front sheet of the casing.

The surface of the casing smoothly moves into the upper and lower sheets of the turret armor. This solution is optimal, which cannot be said about the gun. None of the modern battle tanks have muzzle brakes on the gun, and even more so, slotted brakes with as many as nine slots. As evident from military experience, a muzzle brake adversely affects the accuracy when hitting long-range targets.

When the gas passes through the brake, the barrel jolts as many times as it has exit points for gas. While the overall deviation is very small, at a distance of one and a half to two kilometers it can reach several meters. This is why the 125-mm gun of the Russian T-90 tank, and 120-millimeter German gun Rheinmetall on Leopard and Abrams tanks, as well as the 120-millimeter gun on the Israeli Merkava do not have muzzle brakes in principle.

The turret of PL-01 is equipped with an advanced niche in its rear part that, as in one of the Anders tank, will house an autoloader. A remote control rifle-caliber machine gun and smoke grenade launchers are mounted on the roof of the turret. In addition, on the roof of the turret, close to the sides, there are two blocks with some equipment that looks like a video camera. Their purpose is not yet clear.

These blocks can rotate around a vertical axis and swing in a vertical plane. Another optical system unit is located in front of the turret, near the mask guns. Most likely, it is meant for the surveillance crew. If it is placed inside the hull, appropriate means of monitoring the environmental terrain will be required. Perhaps, this is why installation of a developed system of video and thermal imaging cameras is planned for PL-01.

The systems installed above the gun, as well as certain equipment to the right will likely be used for guiding weapons. On the front part of the turret, to the right of the gun, there is a small niche with two optical devices. To the left of the gun a large vertical slit is provided for in the turret, apparently intended for coaxial machine gun.

PL- 01 will receive a promising fire control system of foreign production, an active protection complex, and a number of other important systems. International Corporation BAE Systems will likely be involved in the creation of complex electronic equipment for this tank.

PL-01 is currently at the stage of early design development, and no more. In a short term the tank-building Polish consortium will show only its mockup at shows and exhibitions. The construction of its metal concept will start in a year or two, and testing of the finished tank is planned for 2016. If the work is completed according to the schedule, serial supply of PL- 01 to customers may start in 2018.

It is still early to say what the result of this work will be and who exactly would acquire the new Polish tanks. Most likely, they will be purchased by the Polish Ministry of Defense. Then other countries and military experts may start ordering, attracted by the original design of the tank and its price, expected to be significantly lower than that of the recognized global leaders of the modern tank building.